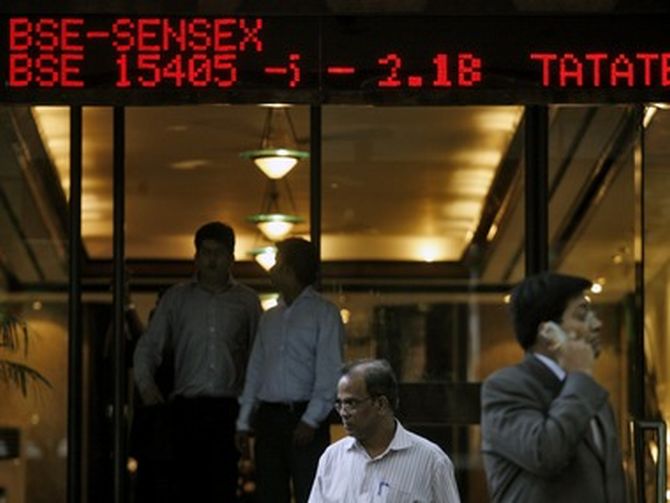 The markets scaled fresh all-time highs on the last day of April derivatives series due to strength in capital goods and banking stocks.

Among the sectoral indices, the S&P BSE Capital Goods Index was up 1.4% and the Bankex gained 1.1%.

The Indian markets had another splendid session in run-up to the fast-approaching D-Day i.e. May 16.

The remarkably steady proceedings of the day, with the Sensex confining itself to a range of around 100 points, negated fears that volatility would rear its head on account of derivatives expiry.

In the process, the markets also turned a blind eye to the negative vibes emanating from their global counterparts on a day when Asian markets such as Straits Times, Hang Seng, Taiwan and Shanghai had a nervous outing and the European bourses were stuttering in early trades.

On the economic front, the rupee has weakened past 61/dollar to 1-month low, trading at 61.06/07 versus its previous close of 60.76/77 as the dollar demand from oil companies and weakness in other regional currencies helped the greenback.

The banking names also saw buying interest, with Axis Bank, HDFC Bank, ICICI Bank and SBI adding around a per cent each. YES Bank ended at Rs 442, higher by Rs 7 or 1.6%, after reporting an 18.7% jump in Q4 net.

The stocks of railway stocks raced ahead for the third day in a row as investors increased exposure in anticipation of a stable government at the centre post the elections in May.

So far this week, Titagarh Wagons is up close to 48%. Kalindee Rail Nirman is up more than 27%.

Kernex Microsystems has moved up 23%, Hind Rectifiers is up about 15% and Texmaco Rail and Engineering is up over 10%. BEML has seen the lowest gain at around 3%.

The cigarettes and tobacco products company had a profit of Rs 34.74 crore in the same quarter a year ago.

Mangalore Chemicals and Fertilisers (MCF) rallied 6.6% to Rs 66 after Deepak Fertilisers and Petrochemicals Corporation makes an open offer to acquire 26% stake in the company at price of Rs 61.75 per share.

Rallis India surged 7.7% to Rs 179 after the agrochemicals company reported a 71% year-on-year (yoy) jump in net profit at Rs 19.3 crore for the quarter ended March 2014. The Tata group firm had posted a net profit of Rs 11.26 crore in the same period last year.

The market breadth was positive.