The Made-in-China tag may have foxed handset players four-five years back but not anymore.

While it comes with the attendant baggage of questions on quality, brands are increasingly mastering ways to work around it.

After the multinational players such as Nokia and Samsung had dug their heels in, Indian handset players rode in on the next wave (around 2008-09).

Importing almost all their products from China, players such as Micromax and Karbonn snatched market share from the MNCs.

Some have broken into the top-five ranking in smartphones (see chart), reporting net profits of 5-6 per cent of their sales revenue in 2012-13.

Over the last one year, they have also spent big on advertising.

The next rung of players, however, is hedging its bets beyond lining up budgets for mass media campaigns.

The category of affordable smartphones is rife with price-wars and marketing noise. But some challengers are putting their money on one more step:

Controlling the supply chain. An industry insider, requesting anonymity, says, "The first wave of Indian handset manufacturers struggled initially because they faced quality issues with their hardware. But owning the value chain could solve it."

The John Sculley-promoted handset brand, Obi Mobiles, for example, is starting its innings in India, but its manufacturing and sourcing are being done out of China.

However, Ajay Sharma, the CEO and an ex-HTC and Micromax hand, is eyeing a smartphone market that has grown by 2.5 times last year over 2012.

When it launches in early July, it would have five-six handsets instead of two-three as previously planned, priced between Rs 5,000 and 15,000.

"It would give consumers greater choice across price-points," says Sharma. However, Obi's advantage lies not in pricing but in its supply chain integration, apart from having Sculley, the former Apple CEO, as a mentor. Sculley's company, Inflexionpoint, had bought Singapore-based Dragon Technology, which would manufacture smartphones for Obi.

Sharma says, "The company's strong connections in the IT and mobile component ecosystem will give us a better grip on quality checks and pricing," says Sharma. Inflexionpoint had also bought Iris Computers with a distribution footprint across India.

"This would give us control over the after-sales service," says Sharma.

Huawei, another brand from China, has been retailing smartphones for the last two years in India.

It has been off to a slow start with 1-2 per cent value market share.

While it is ranked third in global smartphone shipments, according to industry experts, it is now looking to amp up its sales pitch.

It tied up with the IPL team, Royal Challengers Bangalore (RCB), as its principal sponsor, to get featured on team jerseys, in-stadia display and more.

By using RCB's marquee players like Virat Kohli, Yuvraj Singh, AB De Villiers in our communication, we have ensured a higher recall. It has also built channel confidence." It has signed up the creative hotshop, Law & Kenneth, known for its work for Hero MotoCorp and ITC for TVCs for phones priced from Rs 6,000 to 25,000.

But Huawei is banking on its knowledge of chipsets (it is a leading manufacturer) to really differentiate the features in its phones.

For example, it can ensure its chipsets draw less battery power so that the handsets run longer on a single charge, says Narang.

Shashin Devsare, executive director, Karbonn, already among the top four players (see chart), says of his brand's early days, "When we started our operations, the Indian consumer was quick to respond to a new market segment and looked at Karbonn as a viable alternative to the big international brands."

"Karbonn offered the consumer what international brands were offering at nearly four times our price and created a mass appeal," explaining the reason behind the creation of affordable smartphones that have led to large share gains for these players now.

Chinese player, Gionee, which entered last year, is banking on controlling its value chain as well - from R&D, manufacturing to the 3,500 in-shop promoters that it trains to populate multi-brand shops.

"We are clear that our differentiation is based on the hardware we provide, and not software add-ons. Our phones are simply better machines," says Arvind Vohra, Gionee's India head.

"In our 14-month stint, we have been selling at a 10-per cent premium to domestic players that is only 60 per cent of the price of international players with the same features," he says.

He claims Gionee has 1.5 million users already. It has spent heavily on TV shows such as Khatron Ke Khiladi and Jhalak Dikhla Ja and FIFA World Cup 2014 on Sony LIV's digital feed.

The players are also working on distribution. While Vohra credits trained in-shop promoters for sales,

Huawei has tied up with Sangeetha Mobiles, south India's largest multi-brand mobile retailer that is harbouring its own ambition to expand in north India, besides reaching 2,000 multi-brand stores.

However, it has to be seen whether better control of the supply chain would set these players apart or if it will still be price at the end of the day. 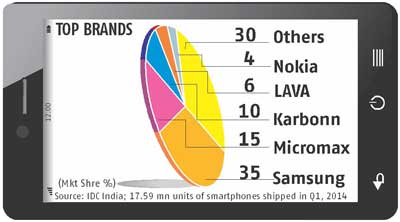