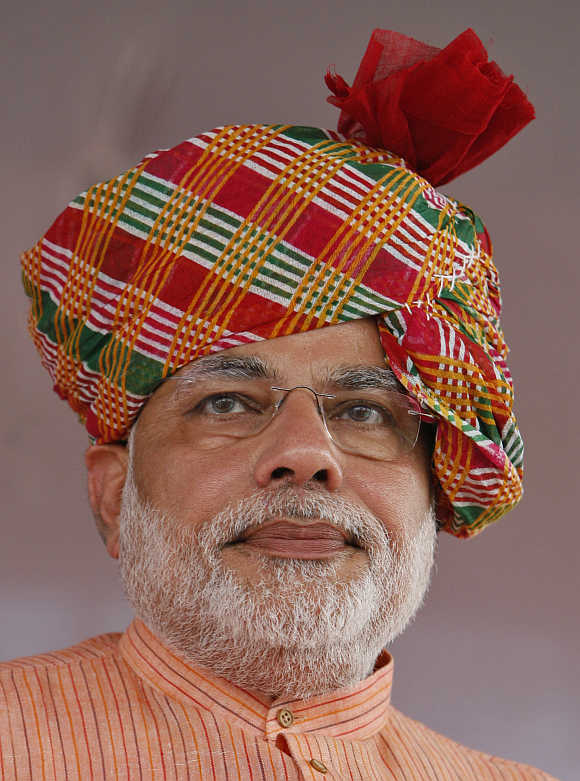 While the 'Modi model' perfectly suits the interests of corporate India and of foreign investors, does it also work as a template for economic development in India, asks Vivek Dehejia, economics professor at Carleton University in Ottawa, Canada, contributor to The New York Times's IndiaInk blog and co-author of Indianomix: Making Sense of Modern India.

A recent re-election victory in the bag, this past weekend's 'Vibrant Gujarat' summit has again cast the glare of the media spotlight on Gujarat's charismatic and controversial Chief Minister, Narendra Modi.

What was most noteworthy about the weekend spectacle -- for spectacle it was -- is how remarkably well choreographed it was around the personage of Modi.

Already a larger than life figure for his many acolytes as indeed for his critics, Modi cemented his position too as the darling of corporate India, with the captains of industry outdoing each other in gushing praise -- bordering in some instances on sheer flattery and outright sycophancy -- as each one in his or her turn took the podium, building a crescendo of approbation and adulation.

It's evident that the 'Gujarat model', or, rather, the 'Modi model', perfectly suits the interests of corporate India and of foreign investors. They are looking for a place where it's easy to do business, there's a sure return on investment, and there isn't the scourge of bureaucratic delay and corruption which bedevil investment projects most elsewhere in India.

The deeper question is: Might the 'Modi model' serve more widely as a template for economic development in India? 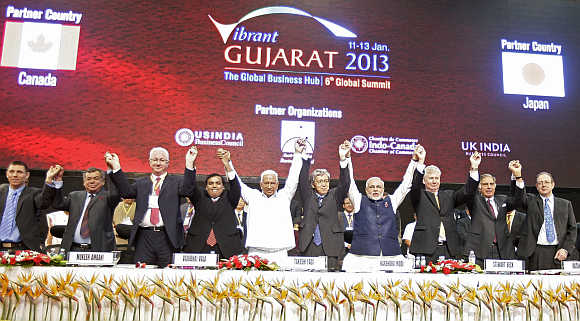 This question has received renewed attention from scholars and analysts, in light both of the evident economic success of Gujarat -- at least of its growth rate -- and of the political success of Modi himself.

Eminent economics professors Jagdish Bhagwati (my former professor) and Arvind Panagariya of Columbia University have suggested that the 'Gujarat model' is a metaphor for a business-friendly, market-driven model centred on economic growth, whether it's applied to Gujarat itself or other states such as Maharashtra or Tamil Nadu.

If broadly understood in that sense, there's no reason why such an approach couldn't resonate more broadly in the states of the Indian Union, or indeed at the level of the Centre.

Bhagwati and Panagariya, further, and more pointedly, suggest that Gujarat itself has gotten a bum rap from those critics who point to its relatively poor performance on social indicators as compared to states such as Kerala. 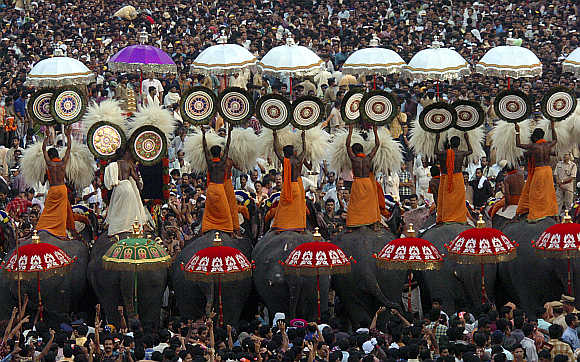 Their response essentially boils down to arguing that Gujarat began from much lower levels of comparable social indicators than Kerala, and that what is relevant is the relative improvement in those indicators over time.

For instance, in 1951, the literacy rate all-India was a meagre 18 per cent, it was only slightly better at 22 per cent in Gujarat, but was already an impressive 47 per cent in Kerala.

Sixty years later, in the 2011 census, the national literacy rate was up to 74 per cent, Gujarat had climbed to 79 per cent, and Kerala was still leading the country at 94 per cent.

Kerala's good record on social indicators, for them, is thus largely an inheritance from the pre-independence past, and doesn't reflect on the state's economic model.

On the other side of the debate, there are those who question whether Gujarat is, indeed, the growth miracle that many claim or routinely assume that it is. Columnist Mihir Sharma points out, for instance, that, according to data from the Planning Commission, Gujarat grew at 10.1 per cent between 2004 and 2012, faster than the national average of 8.3 per cent.

But, during the same period, Maharashtra grew at 10.8 per cent and Tamil Nadu at 10.3 per cent. 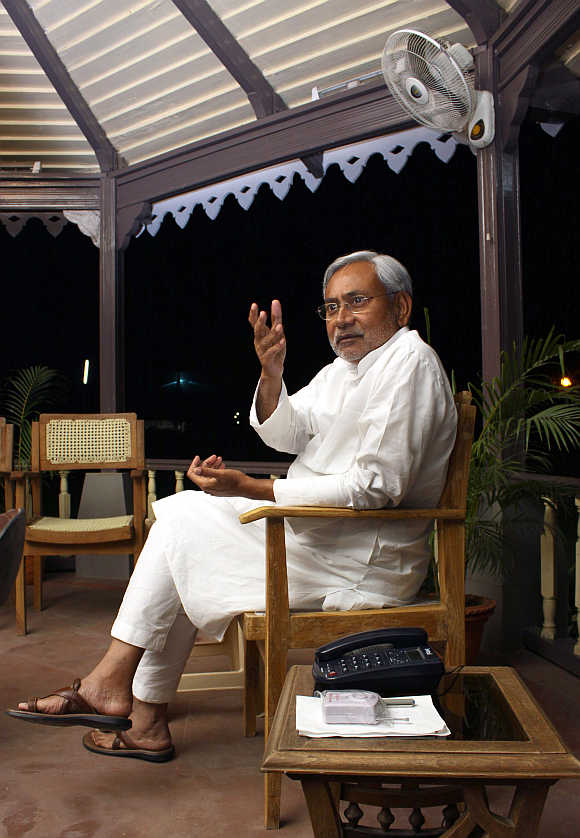 But parsing Gujarat's relative economic performance, and debating whether or not it ought to have done better than it has in reducing poverty and other social ills, is to miss the central point of the debate.

For better or worse, for more than a decade, the Gujarat story has been Modi's, and vice-versa.

What he indisputably has done is demonstrate that it's possible to win elections, repeatedly, on the back of campaigns centred on good governance and economic success -- unlike, for instance, in Maharashtra or Tamil Nadu.

In a country in which growth still largely happens 'at night', despite, not because of, good economic policy, this is an important message, and one that even Modi's critics ought to concede.

But, again, Modi's acolytes must also acknowledge that incumbents who have campaigned successfully on governance and development may also be found in Bihar's Nitish Kumar and Odisha's Naveen Patnaik.

Yet, the emerging narrative trumpeting Modi's success has tended to downplay these other successes, perhaps because both Bihar and Odisha are beginning from a much lower economic base than Gujarat, or perhaps because Kumar and Patnaik have less well-oiled and honed public relations machineries than Modi. 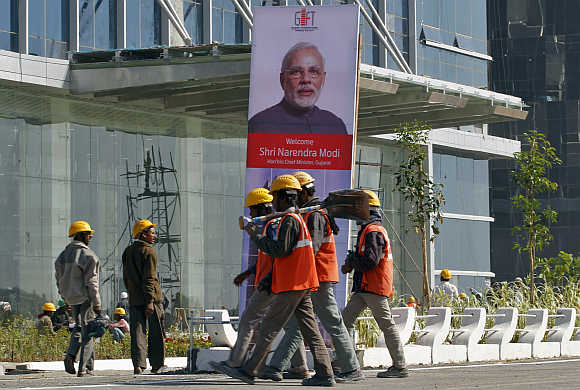 For better or worse, then, in the coming few years, the spotlight is going to continue to be cast on Modi as the putative architect of a subnational economic miracle.

But in the undoubted economic success that he's presided over in Gujarat, this is also where the problems begin for Modi.

For while he may have demonstrated that, at least in Gujarat, 'good economics is also good politics', as he himself proudly proclaimed in his election victory speech, the opposite is not necessarily true: Good politics isn't just about good economics.

To understand this apparent contradiction, look back at the summit. There's something more than a little ironic about the fact that an event apparently devoted to the triumph of free-market capitalism should revolve so fully around a political leader who, at best, enabled the state's economic prosperity, by getting government out of the way of business.

Why, then, does the government, in the person of Modi, take centre stage in an event ostensibly devoted to the state's success in attracting business and minimising the role of government?

This cognitive dissonance lies at the heart of the paradox that is Narendra Modi. His administration of Gujarat appears at one level to presage a new age in Indian economic policymaking in which the State may retreat from the 'commanding heights' of the economy, in Lenin's famous phrase.

Yet, in the omnipresence of Modi, there emanates a contrary message: That a market-led model of economic development cannot function without a strong, even authoritarian, political figure at its head. 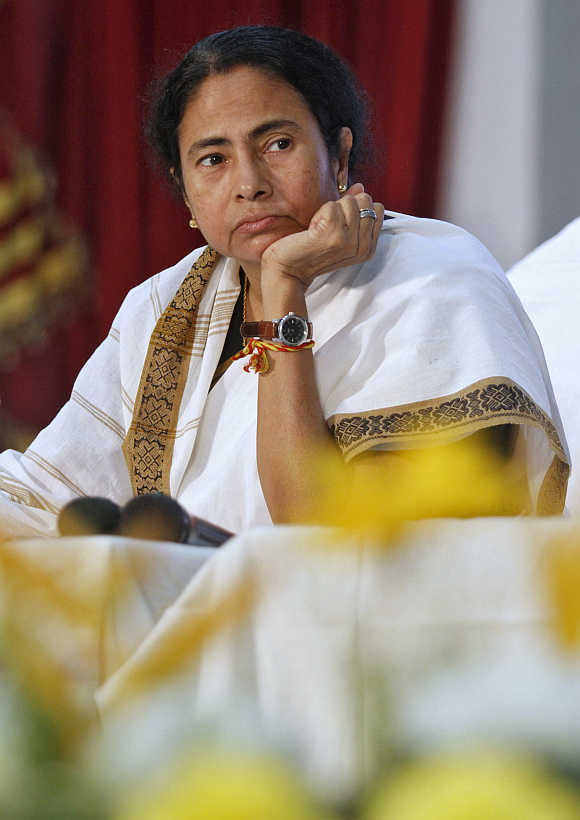 Without a doubt, the cult of personality reigns supreme in Gujarat and among Modi's supporters elsewhere in India and abroad.

Of course, personality-driven politics is ubiquitous (just think of West Bengal's Mamata Banerjee), but nowhere else in India does the official narrative so closely interweave the economic success of the state with the presumed-to-be indispensable enabling role of the cult's idol even more than the supporting ideology of the political party.

For the faithful, Modi is now bigger than Gujarat and by far bigger than the party and political movement which spawned him.

This is what creates disquiet: To what extent can the Modi model be replicated, even as a replacement for an apparently moribund leadership on economic policy at the Centre and in some other states?

Or rather, even if it could, would we wish to replicate it, if what is required is a de facto czar (albeit, democratically elected) at the helm of state?

In the words of commentator Shiv Visvanathan: 'Mr Modi's rhetoric for growth and security might create a technocratic efficiency, but are we ready to accept technocratic authoritarianism?' 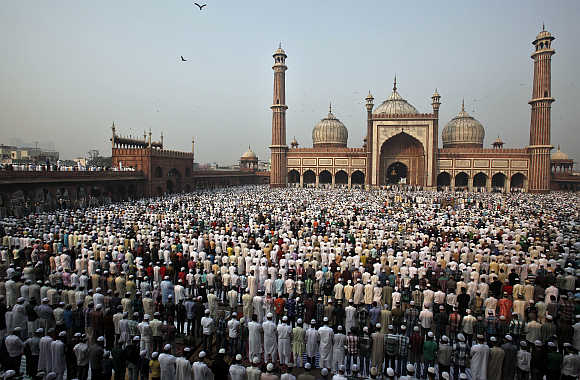 Image: Muslims offer prayers at the Jama Masjid in Delhi.
Photographs: B Mathur/Reuters

And all of this unease is before we recall the ghosts of 2002, which continue to haunt Modi like so many wandering dybbuks.

While he is, of course, innocent unless proven guilty in the eyes of the law, the court of public opinion has not exculpated Modi for the awful events that unfolded in Gujarat under his watch.

This for me raises the greatest long term concern: Will the association of rapid economic growth under the auspices of liberal economic policy with the problematic personage of Modi taint the cause of good economic policy in India, analogous to the way in which Pinochet's Chile spoiled good economics in Latin America for a generation?

This question gains in urgency as Modi is increasingly being touted as a legitimate prime ministerial candidate for 2014. 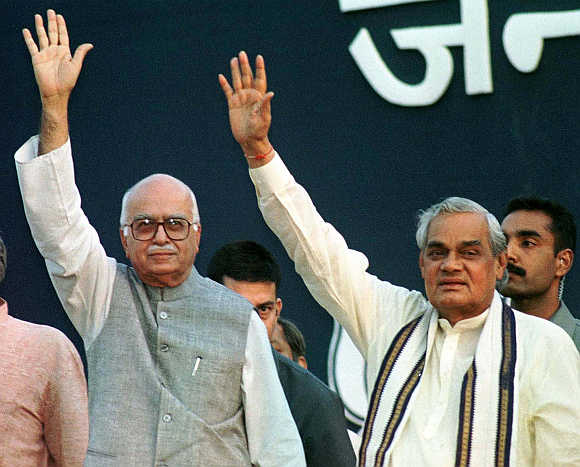 As it happens, India's pluralistic democracy is unlikely to allow an unexpurgated version of Modi to ascend to the highest office in the land.

As persuasively argued by Brown University political science professor Ashutosh Varshney, Modi's electoral success in bipolar Gujarat, in which he could safely ignore the Muslim vote, isn't likely to add up at the national level.

In 207 out of 543 Lok Sabha seats, Varshney reckons, Muslim voters may play a decisive role, either because of their numbers or as pivotal voters in multi-cornered contests. Varshney's suggestion is that, to achieve electoral success nationally, Modi is either going to have transform himself into a more widely acceptable figure, or attach himself to someone who is, much as L K Advani ceded centre stage to Atal Bihari Vajpayee in the 1990s.

For all of its many well documented faults, then, Indian democracy, which catapulted Narendra Modi to prominence in Gujarat, may not so easily transform the 'Modi model' into a nationally viable template.

Good economics and good politics, in the end, must walk hand in hand.