Sign in  |  Create a Rediffmail account
Rediff.com  » Business » Why has the coal scandal become a sweeping saga? 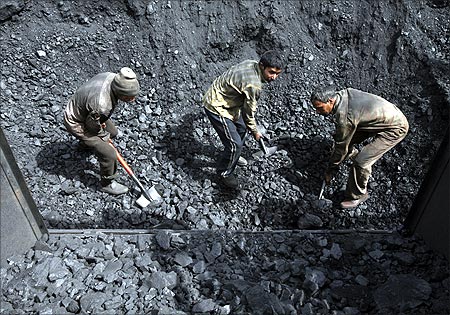 Companies squatted on coal mine allotments for years, without bothering to even apply for permissions to begin mining, but the official story when it came to coal shortages was that Coal India had failed, writes T N Ninan

The coal scandal began with revelations about the Manmohan Singh government, then expanded in scope to take in the Vajpayee government, and has now become a sweeping saga that lays bare the contemporary Indian state.

Not to put too fine a point on it, we are running a kleptocracy, one where the majesty of the law is used repeatedly to favour the growing tribe of crony capitalists, until a crisis erupts and all bets come off.

Companies squatted on coal mine allotments for years, without bothering to even apply for permissions to begin mining, but the official story when it came to coal shortages was that Coal India had failed. 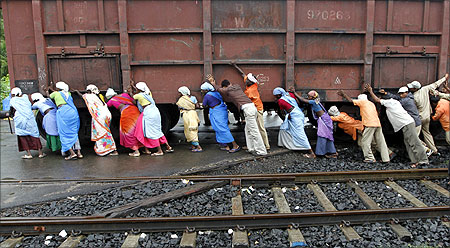 Image: Railway workers push a wagon loaded with coal back to its track after it derailed at Sabarmati power house in Ahmedabad.
Photographs: Amit Dave/Reuters

Turning the disadvantage of inaction to advantage, a too-clever-by-half minister reassures us that the wealth is still in Mother Earth (zero loss without it being zero loss, if you know what he means).

And what about credibility? Some nobodies from a Delhi back-street set up a company with a capital of Rs 100,000, and got a coal mine allotment, but Mr Sibal wants us to believe that transparent and detailed guidelines were in place and being followed.

The Prime Minister remained frozen till he emerged to recite poetry about the virtues of silence in the face of serious accusations.

Is this a government or a vaudeville show? 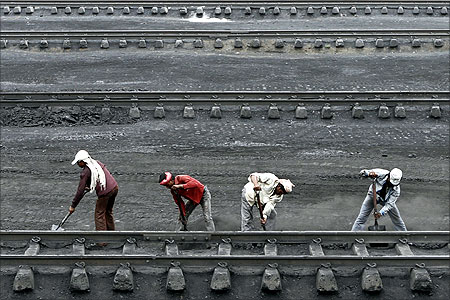 Image: Men work inside a coal yard as they clear coal from a railway track near Ahmedabad.
Photographs: Amit Dave/Reuters

It was open season, actually: the Congress treasurer wrote to a BJP chief minister, and a cabinet minister to the prime minister, while the BJP president's buddy applied to a state government run by the BJP.

They were all granted their wishes.

A Congress MP with mining interests wrote in against auction as policy, so we can see how oligarchs capture the state.

With the big fish out hunting, was it any wonder that inconsequential ministers of state could railroad an ever-obliging prime minister into convenient inaction?

An opinion poll conducted for NDTV now says the biggest issue in the public mind is corruption, so we know that the relentless tide of scandal has imprinted itself on people's brain cells. 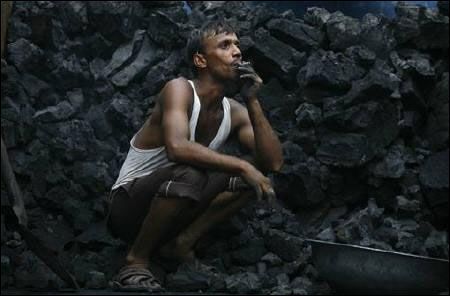 Image: A labourer smokes a bidi, as he takes rest between unloading coal from a supply truck in Noida.
Photographs: Parivartan Sharma/Reuters

What is interesting is that the Bharatiya Janata Party is seen as being almost as bad as the Congress.

Not surprising, perhaps, for what were the Bellary brothers all about?

The political drama, then, starts looking like scripted charade.

One guilty bunch with its hands in the till tries to corner another that is caught in the Comptroller and Auditor-General's klieg lights, while the government's response is the now familiar mixture of debunking the auditor, making silly claims about revenue not lost, and simply blathering away on television.

On the capital's gossip circuit, it has been bruited for years that there was a fixed rate for getting coal mines allotted: so many crores per million tonnes of coal reserves. 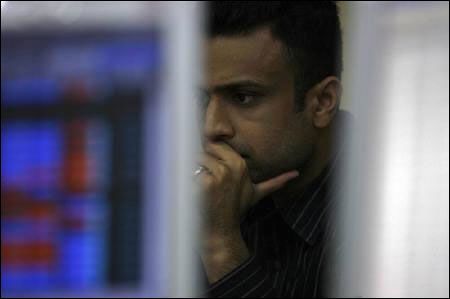 Image: A broker at a brokerage firm in Mumbai.
Photographs: Arko Datta/Reuters

What we don't know is whether every allottee paid up, or whether there were exceptions, and how much of the money went to political parties and how much to individuals.

The silence from the country's leading business houses, who feature in the Comptroller and Auditor General's report, is comment in itself.

It remains for someone to take the matter to the Supreme Court, and cause further executive paralysis.

Corruption silenced telecom, it froze orders for defence equipment, it flared up over gas, and now it might black out the mining and power sectors.

Manmohan Singh's fatal flaw -- his willingness to tolerate corruption all around him while keeping his own hands clean -- has led us into a cul de sac , with the country able to neither tolerate rampant corruption nor root it out.

How much of today's policy paralysis and economic slowdown are because the state has been captured?

And how much of that is a consequence of the prime minister's Faustian bargain with the kleptocracy?