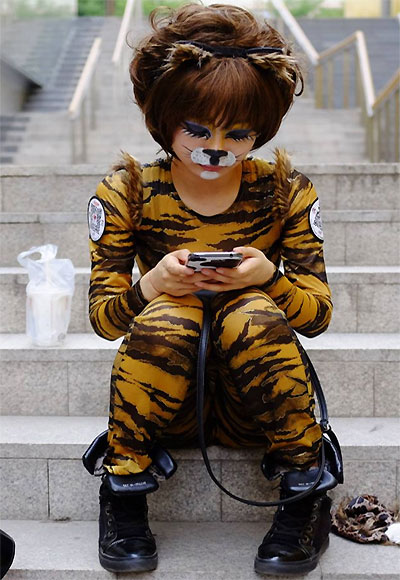 Image: A volunteer wearing an animal costume checks her mobile phone as she waits to perform in an event promoting a love for dogs.
Photographs: Jason Lee/Reuters BS Reporter in New Delhi

The government’s move to permit 100 per cent foreign direct investment (FDI) in telecom will offer foreign telcos the option to easily buy out their Indian partners with which they had to join hands to meet the investment norms for operating in India.

British telecom giant Vodafone Group, Norway-based Telenor and Russia’s Sistema — all present in the country with their Indian partners — are likely to benefit from the move.

The decision will also enable Indian telcos, sitting on a total debt of Rs 2,50,000 crore (Rs 2,500 billion) — 50 per cent of that in foreign debt — to reduce exposure by bringing in cash and retiring debt through equity infusion.

“It is definitely a positive move,”  said Jaideep Ghosh, partner (telecom), KPMG. “There may be further consolidation and buyouts in the telecom space, as cash-rich foreign telcos are likely to seek to buy out Indian partners’ stakes. In the longer term, additional capital inflows can be expected. But, new companies are unlikely to look at the market in the near future. However, there might be a few small deals as telcos may look at reducing debt.” 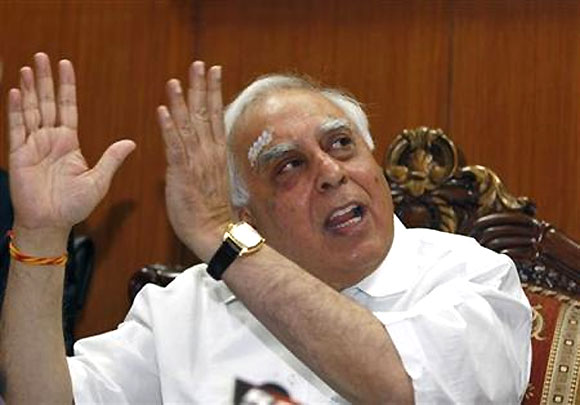 Image: A volunteer wearing an animal costume checks her mobile phone as she waits to perform in an event promoting a love for dogs.
Photographs: Adnan Abidi/Reuters

Earlier on Tuesday, communications and information technology minister Kapil Sibal said 100 per cent FDI in telecom would reenergise the sector and help it get out of the debt trap.

The decision is likely to bring in at least Rs 5 lakh crore of fresh investments into the sector over five years.

“By improving connectivity through the highest quality of connectivity and competition, it will further empower the aam aadmi in a meaningful manner,” Sibal said, adding the decision would not make much difference in security issues.

Earlier this month, the Telecom Commission had approved the proposal to raise FDI cap to 100 per cent. While FDI up to 49 per cent can come via the automatic route, companies would have to get FIPB (Foreign Investment Promotion Board) approval for foreign investments beyond that level.

At present, the country permits up to 74 per cent FDI in the sector — 49 per cent through the automatic route and the rest after FIPB approval. 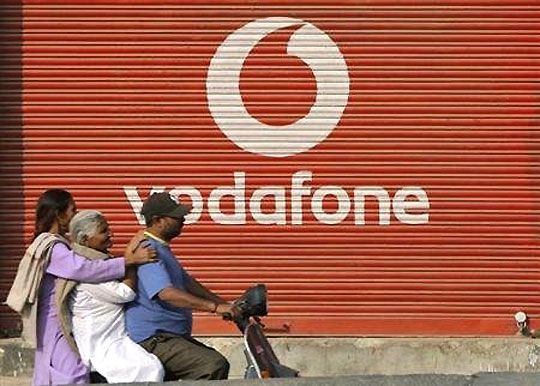 Image: A volunteer wearing an animal costume checks her mobile phone as she waits to perform in an event promoting a love for dogs.
Photographs: Mukesh Gupta/Reuters

Hemant Joshi, partner, Deloitte Haskins & Sells, said: “The industry is under tremendous stress due to regulatory and policy uncertainties, mainly because there is no clarity on merger & acquisition policy and the government has yet to finalise spectrum-related policies, such as refarming, efficient usage, and tax uncertainties.”

Vodafone, which had to scout for a new partner after the Ruias decided to sell out, had inked pact with Ajay Piramal.

According to the agreement, Vodafone would have to buy back shares at a premium if an IPO did not materialise in two years. Vodafone declined comments on the issue. 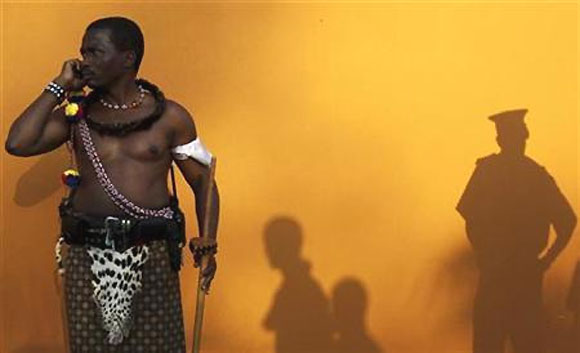 Image: A volunteer wearing an animal costume checks her mobile phone as she waits to perform in an event promoting a love for dogs.
Photographs: Siphiwe Sibeko/Reuters

Responding to Tuesday’s development, a spokesperson at  Sistema Shyam TeleServices, which is 56.68 per cent owned by Russia’s Sistema, said: “The much needed policy decision is a very positive development for the entire industry. With fresh foreign direct investments coming in, this would further catalyse growth and also the process of proliferation of telecom services across the country.”

After the Telecom Commission’s nod for 100 per cent FDI, Telenor, which recently received the FIPB approval to increase its stake in its Indian unit Telewings Communication Services to 74 per cent, said: “The move will make it easier for operators to attract FDI, as it allows more flexibility to shareholders and others looking at long-term investments in India.” 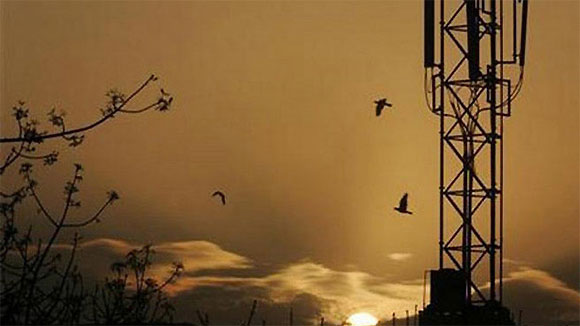 Image: A volunteer wearing an animal costume checks her mobile phone as she waits to perform in an event promoting a love for dogs.
Photographs: Siphiwe Sibeko/Reuters

Aircel, which is 74 per cent owned by Malaysia’s Maxis, has also said in a statement that the move “will undoubtedly have a huge benefit for our customers and (translate into) higher licence fees for the government”.

According to Goldie Dhama, executive director (tax and regulatory services), PwC India: “Foreign investors will no longer need to partner with Indian investors in order to comply with regulatory requirements. Foreign investors will be able to infuse equity based on business needs instead of taking the debt route for funding growth which will reduce debt burden and improve profitability.”