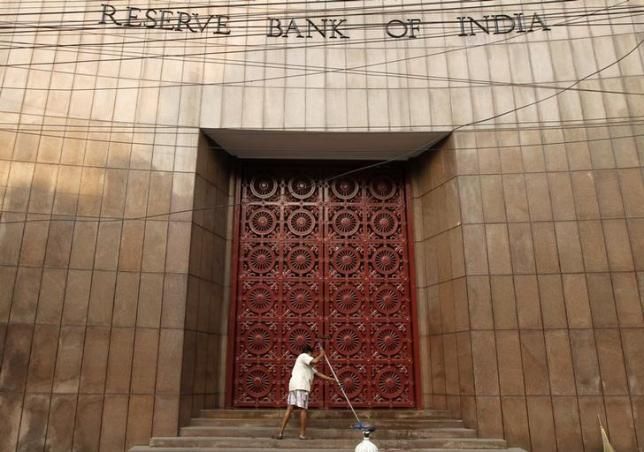 "The inflation surprise in the April reading makes the future trajectory of inflation somewhat more uncertain. . . rising crude prices and implementation of the seventh pay commission awards being the key risks," Rajan said in the second bimonthly monetary policy for the current fiscal. 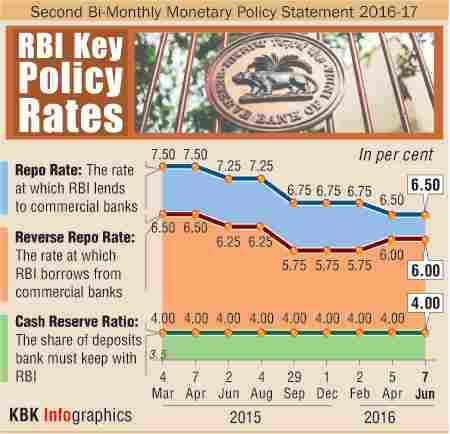 Explaining the rationale for keeping the rates unchanged, Rajan said: "Incoming data since the April policy announcement show a sharper-than-anticipated upsurge in inflationary pressures emanating from a number of food items (beyond seasonal effects), as well as a reversal in commodity prices."

Despite citing upside risks to prices, Rajan retained the inflation target at 5 per cent with an upside bias.

He was however quick to list the Met prediction of an above normal monsoons with a reasonable spatial and temporal distribution of rainfall, coupled with various supply-side management steps and introduction of the electronic national agriculture market (e-NAM) trading portal, as factors that should help moderate unanticipated flares of food inflation.

"In addition, capacity utilisation indicators suggest that the available headroom in industry could keep output prices subdued even as demand picks up," the RBI Governor said.

Nonetheless, he said, there are upside risks to the price index trajectory such as firming international commodity prices, particularly crude oil and the 7th pay commission awards which will have to be factored into projections as soon as clarity on implementation emerges.

"Taking these factors into account, the inflation projections given in the April policy statement are retained, though with an upside bias," Rajan said, adding that considerable uncertainty surrounds these projections. 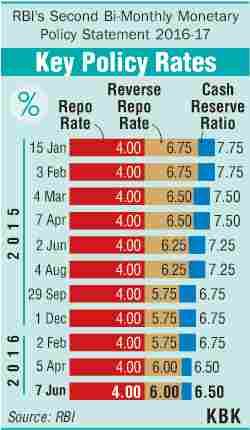 He also noted that domestic conditions for growth are improving gradually, mainly driven by consumption demand, which is expected to strengthen with a normal monsoon and the implementation of the pay commission award.

There are firm signs of recovery, which though is still uneven, he said but the central bank retained its GDP forecast at 7.6 per cent for the current fiscal year.

"Yet, business confidence will be restrained to an extent on account of unrelenting global factors. On a reassessment of balance of risks, the GVA growth projection for 2016-17 has been retained at 7.6 per cent with risks evenly balanced," Rajan said in the policy statement, which would probably the last policy where interest rate is anchored by RBI Governor.

The Governor further said that there are also some talks of variety of funds to invest in stressed situations.

When asked whether he would be comfortable with the idea of stressed assets funds, Rajan said the issue is about comfortability of banks and funds.

"That meeting of the two is a big issue which needs to be resolved," he said.

Rajan said the central bank will continuously monitor both rupee as well as dollar liquidity and act appropriately.

On the forthcoming redemption of FCNR-B deposits from September through October, he said, "Our sense is that the leveraged portions of those deposits will not be renewed. Therefore, there could possibly be outflows of the order of USD 20 billion."

RBI has covered those requirements in the forward markets, and will take some advance deliveries in the lead up to the maturation of the deposits, he said.

"Of course, some counterparties are apprehensive that they will not be able to deliver easily on the dollars we are owed, and hence there may be some dollar shortage in the market.

"This is something that we will monitor," he said, and assured that RBI will supply dollars in case of extreme volatility, but no one should take this for granted.

He said the credit growth in April and May has not been strong but deposit growth has been fairly strong.

When asked whether RBI will ask banks to make additional provisions while moving towards the March 2017 deadline to clean up their balance sheets, RBI deputy governor S S Mundra said this year they have suggested banks to address the potential weaknesses which would entail making some provisions.

"Though at this point in time we have not prescribed to benchmark the provisioning which used to be, we would certainly encourage the banks on their own to keep on improving their provision coverage ratio as their financial position permit them to do so," Mundra said.

On impact of a possible Brexit, Rajan said that could be a source of volatility.

"If it happens, there will be lot of turmoil in markets.

"That said, we have three defences -- good policy, longer term liabilities and reasonable amount of reserves, which will help us weather volatility in financial market."

'Rate cuts by RBI could be close to the bottom' 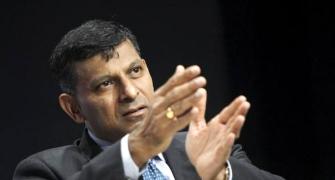