'In the US, the economic cycle has been on an uptick since 2008. It's a 10-year economic cycle; the odds are it will go in the reverse direction. We should be cautious about that.' 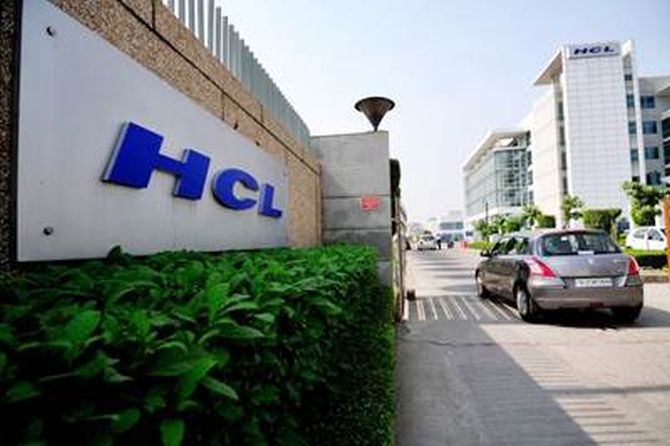 HCL Technologies, which reported its third quarter results recently, said its pipeline is at a 'historic peak' in spite of some client-specific delays.

The company said it exceeded its $10-billion annualised revenue run rate during the quarter.

Chief Executive Officer C Vijaykumar spoke to Neha Alawadhi after the Q3 results about what gives HCL Tech the confidence to continue its strong showing.

How does 2020 look overall for HCL Tech, with some clients putting spending decisions on hold? What are the key sectors where you expect spending to be higher?

The pipeline is very strong.

We are quite confident of the conversion rates.

As we speak, we are booking large deals.

I am positive. Some segments will be weak, some strong.

We're cautious about financial services because in European banks, there is some decline in spending.

Among the areas which you see as strong, is the business more core services or digital?

Today, almost all deals are about providers taking over a legacy landscape and modernising it.

While some call it digital, we call it Mode-2 (digital and new-age business) only when the transformation happens.

The deals have a mix of both -- maybe 70 per cent will be tech and managing the traditional landscape; modernisation will be the rest 30 per cent.

In terms of deal sizes and client spending, what sort of trends do you see in 2020?

We had billion-dollar deals, I don't see that, but still quite large, in the $200-500-million range.

There is marginal increase in spending.

But within this spending, the digital component is possibly growing at double the rate of traditional components.

The US is entering an election year. How do you see that impacting business?

I think it's a little early to call that out.

Even if you see in 2016, the impact of elections happened towards the last quarter, and after the new government was elected.

I would wait for a couple of quarters to look at that.

The US is also going through its own set of issues...

In the US, the economic cycle has been on an uptick since 2008.

It's a 10-year economic cycle; the odds are it will go in the reverse direction.

We should be cautious about that.

You recently acquired Sankalp Semiconductor, and you have a large presence in the semiconductor space, which is seeing an impact due to the US-China situation. Is that a cause for worry?

It's (Sankalp) a small company.

Semiconductor is a strong space for us.

Because of US-China, some impact was there, but I think it has cooled off somewhat.

It should only be positive (now).

The localisation rate in the US for you is in the 67-per cent range. Wipro is operating at about 70 per cent. Is there scope for you to scale up localisation?

There may not be because we also need people who have enough experience in the offshore model.

For some senior talent, we will continue to depend on getting visas for Indian employees and employees in other countries.

The special economic zone (SEZ) sunset clause is approaching in March. Will you continue to push for its extensions through the industry association route or on your own?

The Indian government has not extended it, and March is just two months away.

Everyone is trying to build more SEZ capacity before the sunset clause; so are we.

We will continue to push for the extension of SEZ benefits.

In Europe too, a lot is going on politically. How does that affect your overall business?

Europe, especially if you look at Germany and France, is a lot more open to using external global providers like us, which, I believe, will do very well for us.

Now you have Australia and Singapore contributing a lot more...

Yes, and we will add more geographies.

We will expand in Canada, France, West Asia, where we have reasonable presence and will continue to expand in South Africa as well. Despite slowdown, these 3 sectors will lead job growth Good news for techies; 25,000 openings in IT sector