News
Business
Movies
Sports
Cricket
Get Ahead
Money Tips
Shopping
Sign in  |  Create a Rediffmail account
Rediff.com  » Business » 'Our economic nirvana is not through GST'

‘Tax terrorism has come back in a much bigger way’

Chartered accountant and commentator M R Venkatesh on why the GST Bill will cost the BJP dear. 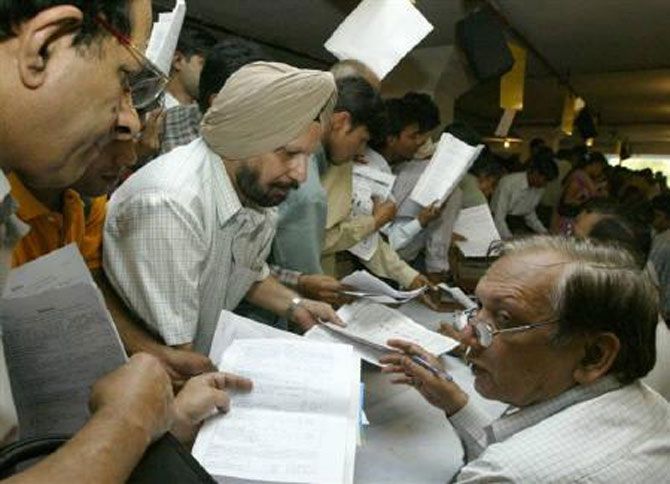 M R Venkatesh, a chartered accountant by profession, is also a columnist and a commentator on international trade and economic affairs.

He has also authored quite a few books, and the latest ones are Sense, Sensex and Sentiments and Dr Manmohan Singh, a decade of decay.

In this exclusive interview to Shobha Warrier/Rediff.com, Venkatesh, image, below, says the Goods and Services Tax bill will cost the Bharatiya Janata Party the 2019 elections. 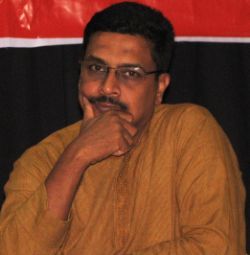 How important is the passing of the GST Bill for the Narendra  Modi government?

Unfortunately, the government has taken it as a prestige issue. It was not required at all.

For 65 years, we have survived without GST and we can survive for another 65 years without GST.

Like (IIM-Bangalore professor)Dr R Vaidyanathan calls it, the two per cent growth that would automatically happen if the GST bill is brought in, is a POTA figure: Pulled Out of Thin Air figure! There is no calculation which demonstrates that there would be two pc growth because of GST. The bill is necessary but it is not crucial.

The argument that they put forward is that the tax rates will come down and the government will get more revenue….

Till date, nobody has come zeroed in on the rate. It is another matter that (Tamil Nadu Chief Minister) Jayalalitha wants it at 25 pc. Assuming it is 18 pc like the Congress wants, your telephone bill will have 18 pc service tax instead of 14 pc, which means the middle class is going to pay more on service tax for everything. There will be an increase in taxes, and yes, of course, there will be a reduction in the state taxes.

They say the government is going to get more revenue. What does it mean? You and I are going to pay more into the hands of the government. Whether the tax rates come down or not, we will be down in our disposable income.

Whose tax rate is going to come down then?

They say that the manufacturing tax rate will come down because today, manufacturing is suffering from 14 pc excise duty and another 14 pc of sales tax and in total, a tax of around 29-30 pc. But Jayalalitha says we cannot bring it down to 18 pc; let it be 25 pc as Tamil Nadu is a manufacturing state. The states that don’t manufacture are happy with even 16 pc.

You mean manufacturing states like Tamil Nadu or Punjab or Haryana will suffer because of the bill?

Yes, they may suffer because instead of 14 pc excise and 14 pc sales tax, if it is 18 pc, they will lose money. That is why they are talking about compensation.

Then, who is going to benefit from this except the government with more revenue?

Nobody is clear. There is no document which shows how the industry or the consumer is going to benefit. All that we hear is, this will help boost business activities.

All over the world, they use just one GST while in India, it is going to be three. Will it not complicate things?

Exactly. This is not one act but three acts: one is GST -- Goods and Service Tax act; the SGST, which is the state goods and service tax act, and third one is IGST which is Inter state Goods and Service tax act. This means, you have to go for three assessments, three layerings and three segmentations, and you are going to have mindboggling problems because of this.

Everybody wants to suspend the sense of disbelief. You should understand that the propensity of Indian bureaucracy to complicate the simplest of things is legendary. This is an unchartered territory and they will necessarily complicate things. Instead of a one-headed monster, you are going to have a three-headed monster now.

On the other hand, the government tells people that with the new bill, there will be buoyancy in the markets which is very much needed for reforms to happen.

Where is the proof? Your guess is as good as mine. I have not seen one proof. This is just somebody’s figment of imagination.

They are talking about the two pc growth that is going to happen because of the new GST bill.  According to (vice chairman of NITI Aayog) Arvind Panagariya, the growth rate for 2016-17 is seven and a half pc. He also says two pc growth will be because of GST. Is he suggesting that without GST, we will grow only five and a half pc? I can understand if GST takes you to nine and a half pc.

The impression the government gives is that they cannot proceed with reforms if GST is not implemented. How do you react to this?

The problem with our reforms is two-fold. One is physical reforms and the other is fiscal reforms. You go to Chennai ports and you see the road is encroached, which has nothing to do with GST. You have to remove the encroachment to make the port viable. And in fiscal reforms, many things like simplification of tax should happen but are they happening?

We do not want to work for moksha; we want one Gayatri Mantra that will give us moksha. It is not going to happen. Our economic nirvana is not through GST.

In the last session of Parliament, the mantra was land reforms. They said without land reforms, reforms would not happen. Now, we hear that without GST reforms will not happen. What is more important for reforms?

This is the problem with the government. They do not have economic conviction on what they are talking about. They are jumping from one session to the other with one idea to the other.

Apart from the fact that the bureaucracy doesn’t have an understanding on the implementation side, they are talking about national clearance. Now, there are three million tax-payers and they file tax returns in July. Even then the server crashes. Here, you are talking about millions more transactions on a daily basis. Do you have the electronic infrastructure to take this load?

So what will be the end result?

My worry is, in the initial one to one and a half years there will be enormous price hike. That will make this government very unpopular. If you roll it out by 2016 end, the price hike will go on till 2017 and even 2018. And you are running the risk of running a government which is high on inflation and facing the elections in 2019. Does the BJP not see this happening?

Do you feel they are not advised properly on this?

Absolutely. They have not done their homework and they think economic nirvana is through short cuts.

If you think the entire market is to be integrated, it is a welcome thought. But all that is needed is a single tax and a single rate.

The Vajpayee government in 2003 appointed the Kelkar Committee. Was it because the report went through various governments that the human baby became a monkey baby?

Exactly. That is why we are facing too many issues now. Over the years, they kept out alcohol, entertainment tax, etc from the GST. Also, instead of a single GST, we have three GSTs now. And we are dependent on an infrastructure that will need at least one to one and a half years to make it work and not from day one. There will be enormous teething problems.

And the worst sufferers will be the small and medium businessmen who form the core of the BJP’s base. They will get showcause notices, they will not get credit and they will be angry with the BJP. By the time the GST gets implemented, the damage will be enormous.

I feel the Congress is playing it smart and wants the BJP to bring the bill in 2016-17 so that the results will be fully seen in 2019 when we go to the polls.

Do you think the Congress is aware of this and the BJP is not?

Yes. I am sorry to say the BJP think-tank has not done its homework well. In India, only one rate without exemption will work.

So you are saying by implementing the GST Bill, the BJP is going to lose the middle class, and the small and medium manufacturers?

Yes. It is going to antagonise its core voter base. Nobody is talking about the inflation the bill is going to cause. I will call the GST Bill a self-goal by the BJP!

In the last 18 months, has the government done anything to boost the Indian economy?

Out of the top 3000 companies, around 60 pc are not earning enough profit to pay interest. This is the state of the Indian economy today. Why are they not able to do it? Most of them have bribed themselves to non-competitiveness. We are not able to compete with China or Sri Lanka or Thailand in Chennai. So, where is the question of us exporting and defeating them outside? Most of this is corruption-driven.

Bureaucracy has become extremely powerful and is harassing their own constituency which voted them to power.  And what we are getting is incremental Congressism.