IMAGE: Workers install a metal fencing on a flyover to prevent people from throwing waste into the Yamuna river in New Delhi, April 7, 2016. Photograph: Anindito Mukherjee/Reuters
'You are talking about jobs not being created. What is more alarming is thousands of people are losing jobs!'
'This government has not done anything when people are losing jobs,' says K C Mishra of the Bharatiya Mazdoor Sandh, the Rashtriya Swayamsevak Sangh aligned trade union.

When Shobha Warrier spoke to K C Mishra of the Bharatiya Mazdoor Sangh -- the trade union aligned with the Sangh Parivar -- six months ago, he was its general secretary.

At the BMS' annual conference in Kanpur recently, Mishra passed on the baton to a new team.

Six months ago, Mishra was angry and disappointed with the Narendra Modi government's economic policies and called it a pro-capitalist and pro-industrialist government.

Six months later, he is still disappointed with the Modi Sarkar's economic policies and calls it anti-labour and anti-poor.

While the Narendra Modi government was celebrating three years in power, the BMS at its three-day national conference in Kanpur labelled it pro-capitalist and anti-labour. Why do you say so?

From the time this government was installed on the 26th of May 2014, it has not done anything for the poorer section of society and the labour force.

We feel the government has done nothing for the workers of this country.

In the case of minimum wages, the government had promised to make it mandatory to implement minimum wages throughout the country, but it has done so only for central government employees.

It was not implemented even for public sector employees.

Yes, the Bonus Act was amended, but the ceiling is very low.

We feel the ceiling shouldn't be there as most workers do not come under the Bonus Act.

Narendra Modi says his government works for the poor. Don't you agree with him?

What does the NITI Aayog constituted by the government do? It works only for the corporate houses.

A couple of months ago, the Supreme Court remarked that all workers should get equal pay for the same work. But the NITI Aayog wanted the government to delete this clause.

In fact, the NITI Aayog is interfering in all the government departments.

What does it mean? It is working against the working class.

NITI Aayog is only for rich corporate houses and capitalists. 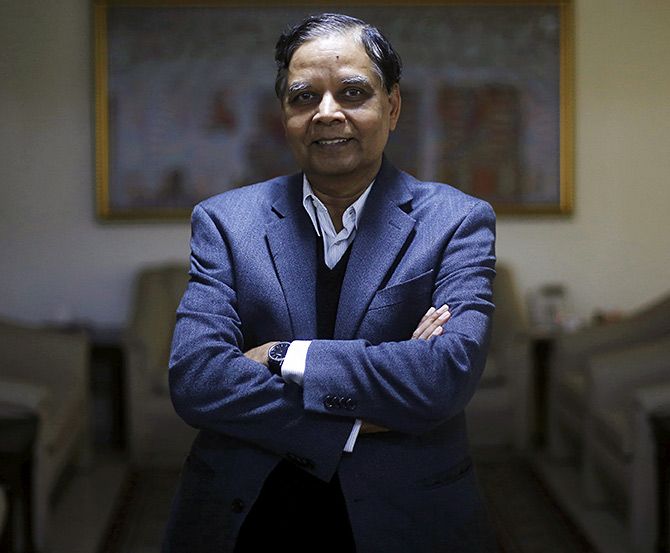 Yes, all the actions of the government give us the impression that it is against the organised section of the working class.

The government is trying (to change) all the laws and amend many clauses, particularly the Industrial Relations Act to make them pro-capitalist and anti-labour.

NITI Aayog replaced the Planning Commission. What difference do you see?

The Planning Commission was formed under an enactment, but it was the Cabinet's decision to form the NITI Aayog.

You said the NITI Aayog has given the Modi government an anti-labour face...

If the government wants to change its image and wants to have a pro-labour face, it has to change the NITI Aayog, particularly this gentleman, Arvind Panagariya.

He is responsible for giving this anti-labour image to the government.

You say the government is against the poorer sections of society, but at every rally, Narendra Modi says his government is for the poor...

I am not saying the government has not done anything for the poor; the Mudra Yojna has helped many poor people.

But if you take all the other decisions of the government, it is not pro-poor.

It is also against the organised sector of the labour class.

Jobs are not being created. Is it not a big worry for all?

You are talking about jobs not being created. What is more alarming is thousands of people are losing jobs!

This government has not created jobs for any class; it has not done anything when people are losing jobs. 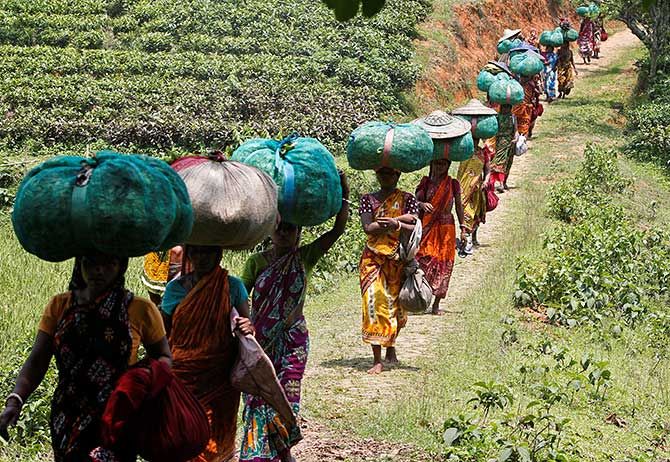 IMAGE: Tea garden workers at the Durgabari tea estate on the outskirts of Agartala, Tripura, May 4, 2017. Photograph: Jayanta Dey/Reuters
'If they had taken care to industrialise the rural areas, the life of the poor in the villages would have been better,' says K C Mishra.

What should the government do to create jobs?

First, let them do something so that workers do not lose their jobs.

If they had taken care to industrialise the rural areas, the life of the poor in the villages would have been better.

Ever since (then prime minister P V) Narasimha Rao started this free market economy, the MSME sector is dying.

More than 50 lakh small industries have closed shop and 5 crore people have lost their jobs in the last 26 years.

What the government should do to create jobs is to help revive the MSME sector.

This is the sector that gives employment to lakhs of people.

The MSME sector provides more employment than the big industries.

So, what should be done immediately is to revive the MSME sector.

It is said that automation is one reason why jobs are not being created in large numbers. Do you feel so?

It is a fact that automation has created a lot of problems for ordinary workers.

Because of automation, thousands of people -- especially those working in road construction, etc -- lost their jobs. Now, machines do jobs which were done by people earlier.

Automation will only harm a country like India where there are more unemployed people.

When even educated young men are roaming around without jobs, do you need machines to do their jobs?

You can have automation in space science, military, intelligence, etc, but not in labour intensive areas.

From 1983, when computers were introduced in banks, we at the Bharatiya Mazdoor Sangh have been against automation.

We have been saying it will create problems in a country like India as we have a huge population of educated unemployed youth.

Not only will automation not create jobs, it will even snatch jobs away from people.

Now that thousands of employees are laid off by the IT companies, do you feel it is high time they also form unions?

They should be unionised, we have been telling them to come to the trade union fold.

But the government and industrialists are preventing them forming unions. Not allowing them to unionise is against our fundamental rights.

When I spoke to the President of the Forum of IT Employees, she said they had only 752 members in the union when tens of thousands of people are employed in the sector.
The fact is the employees in the IT sector are reluctant to join any unions.

Yes, it is true that the IT employees are not joining the unions.

We have also been trying to form unions at various places, but we have not been successful so far.

They (techies) think they do not have to join the unions, but look at the way they are suffering now. IMAGE: Farmers from Tamil Nadu pose half shaved during a protest demanding a drought-relief package from the Union government, in New Delhi, April 3, 2017. Photograph: Cathal McNaughton/Reuters
'Has the government done anything to help the farmers? Nothing,' says K C Mishra.

Do you think the government is doing enough to help the agriculture sector to come out of the crisis?

Not at all. If the government's attention was on this sector, more people in the rural areas would have been engaged in agriculture.

Has the government done anything to help the farmers? Nothing.

Farmers are committing suicide every day.

Do you consider demonetisation a good move?

I don't know which section of society got benefited from demonetisation.

I would say it was a decision that affected the poor people badly, especially those workers in the construction sector.

For the last six months, the construction workers have no jobs at all and those who worked were not paid a single penny.

The condition of these workers is pitiable.

I would say demonetisation has not helped the poor of India at all.

The government says all the black money in the country has come to the banks.

Do you mean to say the Rs 18 lakh crores deposited in the banks was black money?

How will you describe the three years of the Narendra Modi government?

Though the Narendra Modi government has done many good things, as far as the Indian economy is concerned, it has only worked for the rich, the capitalists and the industrialists.

The government has done nothing for the working class except the Mudra Yojana and some other small schemes.

The labour department is trying to introduce social security for all workers, and if it succeeds, it will be a major step which will help even the workers in the unorganised sector.

Labour Minister Bandaru Dattatreya is trying to do a lot for the working class, but the government is not in favour of his proposals.

So, whatever the minister proposes is not approved by the Cabinet or not going to Parliament.

If you were to give marks to the government's performance, how many marks will you give it out of ten?

I can only consider what the government has done for the labour class.

From that point of view, I will give only 3, 4 marks out of 10. I feel this government has totally failed as far as labour is concerned.