No attention to detail seems to have been paid while introducing such a major provision and the wide arc of people it will take in its ambit, states Harsh Roongta.
Illustration: Dominic Xavier/Rediff.com Based on a quick Internet search it seems Budget 2020 puts India in very illustrious company.

It has been proposed as a provision to prevent tax abuse.

The proposal seeks to redefine the concept of 'resident in India' tax provisions for what are referred to as 'Stateless' persons.

One class of people who will be severely affected are the merchant navy personnel (most of whom are definitely not High Networth Individuals).

Currently, if they serve on foreign ships for more than 6 months in a year and get their salaries from their overseas employers, they do not pay taxes in any country including India.

They completely escape payment of taxes which is justified because they earn their income on the high seas.

But the tax department feels that most of them have their families in India and almost the entire time apart from on ship duties is spent in India.

Rest of their economic activities are also almost exclusively in India.

The proposed anti-abuse provision provide that if they are not paying taxes in any other country they will anyways be deemed to be Resident in India (even if they are serving on the ship for the entire year and not even setting foot in India for the whole year).

They will still have to pay tax in India.

That is a rather high price to pay for the Indian passport as they will end up paying tax on income earned outside India and they never even set foot in India for the whole year.

Although it does not seem to be the intention, the way the proposal is worded, even Indian citizens staying/working in zero tax countries such as Dubai may have to pay tax in India on incomes earned there even if they never visit India or have no economic connection with India.

No attention to detail seems to have been paid while introducing such a major provision and the wide arc of people it will take in its ambit.

On the other big thing that we will join the Illustrious company of US of A, Australia and Canada, is by having a Citizens Charter in our Income Tax Act.

I just looked up the existing charter put out by CBDT.

Currently, it is just meant as a statement of intentions rather than an enforceable charter.

For example, it provides that the income tax department will provide refund within 6 months of the return being received.

An appellate order will be given effect to within one month.

A request for rectification of an assessment order will be given in 2 months.

The issue is that none of this is currently legally enforceable. These are just intentions of the department.

Anyone who has dealt with the income tax department will tell you these time lines are laughable.

One assumes that the charter announced under the Income Tax Act will be legally enforceable and will provide penalties where the department transgresses the timelines mentioned there.

Without such penalties the charter, even if issued under the Income Tax Act, will remain a meaningless document.

With such penalties, it will be a powerful force for change and foster genuine trust in the department.

It will also be interesting what the timelines the department will commit to when the charter is provided under the Income Tax Act as compared to the current one.

The third big change is the availability of lower income tax rates to individuals who agree to give many exemptions/deductions such as standard deduction, HRA exemption, LTC, interest on home loans related to self occupied property, your insurance premium/ELSS/EPF contribution/medical policy premium, interest on education loan etc. and for self employed people many other deductions such as depreciation, etc.

The lower rates apply till the taxable income is Rs 15 lakh per annum.

The provisions are extremely convoluted.

The end result is that you may pay almost the same amount of tax, but you will be left with better liquidity as you will not need to invest your monies in the specified modes.

The good thing is that salaried individuals who don't have income from business, can exercise this option each year.

At first glance, it seems very few salaried people will be opting for this though some business consultants with low expenses may opt for it.

It is basically a boon for tax consultants who will be besieged with queries on whether to opt for this scheme or not. 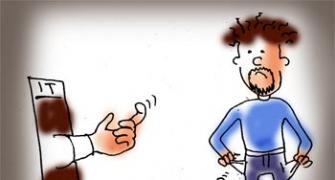