'...because of its permanent nature.'
'If you work for the private sector or for yourself, you are not regarded as being employed,' points out T C A Srinivasa Raghavan. 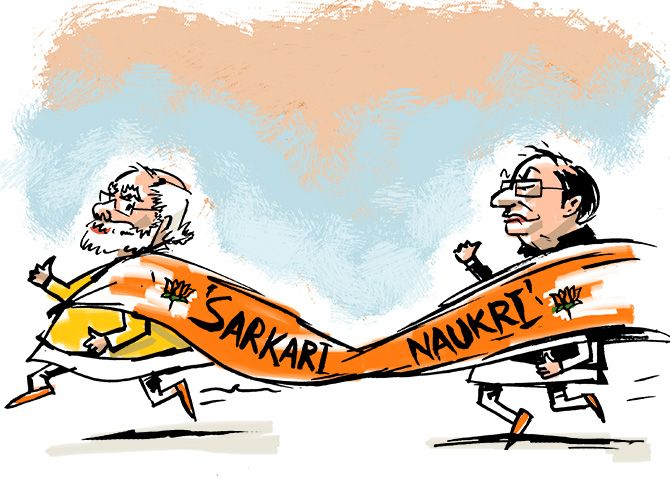 Broadly speaking there have been two sorts of responses to the story which the very young Somesh Jha of Business Standard scooped about the National Sample Survey Office (NSSO) survey on jobs.

One was the gnashing of teeth by supporters of the government and the other was the sound of hands being rubbed in glee by its opponents.

But, as always happens when something like this happens, everyone missed the point. And thereby hangs a personal tale.

In 1996, I decided to quit my job with Business Standard and work from home. This decision was consistent with a paper I had written for ICRIER in 1988 that service delivery would become disembodied and would not need the physical presence of the producer of that service.

Besides, I just didn't see the point of sitting in an office when I could be watching cricket on TV and writing at the same time.

Thus in 1997 technically I became 'unemployed'. However, over the next few years my income increased very sharply because now I had become more productive.

Instead of selling my time to one buyer I had started selling my output to many buyers. In income tax terms, I went from Form 16 to Form 16A. As my then colleague Dr Ashok Desai put it, I became a one-man business unit.

Or as Bertrand Russell might have put it, I became a unit set that belongs to itself. Like Schroedinger's Cat I was in two states simultaneously -- working but not employed. When the uproar started, I took to Twitter and posed what I believe is a cosmically important philosophical question for Indian politicians: Can a person employ himself or herself? The income tax department says yes.

But what would the NSSO say? I mean, if the surveyor asked me if I was employed what would I say?

Whence the importance of the question that the NSSO has been asking. It is an irrelevant one for this century because not only is employment a 20th century idea, it is also an idea of 20th century politics.

Not just that: Keynes introduced the idea of government intervention into the economic thinking of politicians who, after 1945, substituted employment for investment in his famous equation. They did this to get votes. Let me put that differently: If we can have a concept called the 'natural' rate of interest for the money market, why can't we have a similar 'natural' concept for the labour market?

The natural rate of interest doesn't mean that such a rate occurs in nature, but that it is the rate that is consistent with 'full' employment and constant inflation.

However, no one -- least of all politicians -- knows what full employment means which is why there is always a lot of confusion about it.

Economists have tried a number of definitions of full employment. The most acceptable one politically is that full employment is when only 1% to 2% of those wanting to be employed do not get a job.

But what if, like me, a lot more people prefer not to be employed, preferring instead simply to work? The Australian labour market illustrates this phenomenon perfectly. I also strongly believe that, in India, because of labour market interventions by politicians -- Kerala is an excellent example -- employment and productivity are inversely linked. What an employee earns has very little to do with how much he or she works.

I suspect in India a government job alone is what is regarded as real 'employment' because of its permanent nature.

If you work for the private sector or for yourself, you are not regarded as being employed -- and this is what shows up in surveys.

But truth be told, the fact that people stop looking for a 'job' doesn't mean a damn thing economically. It is stupid to say they have withdrawn from the workforce except in some technical sense.

Of course, politically it is entirely different. It gives an Opposition a big stick with which to beat a government. 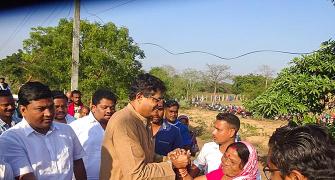