News
Business
Movies
Sports
Cricket
Get Ahead
Money Tips
Shopping
Sign in  |  Create a Rediffmail account
Rediff.com  » Business » What the government overlooked about the economy

The longer it takes for RBI and the government to stabilise monetary conditions in the economy, the more severe and long lasting will be the damage caused to various sectors of the economy, especially to the informal sector, says Rajeswari Sengupta. 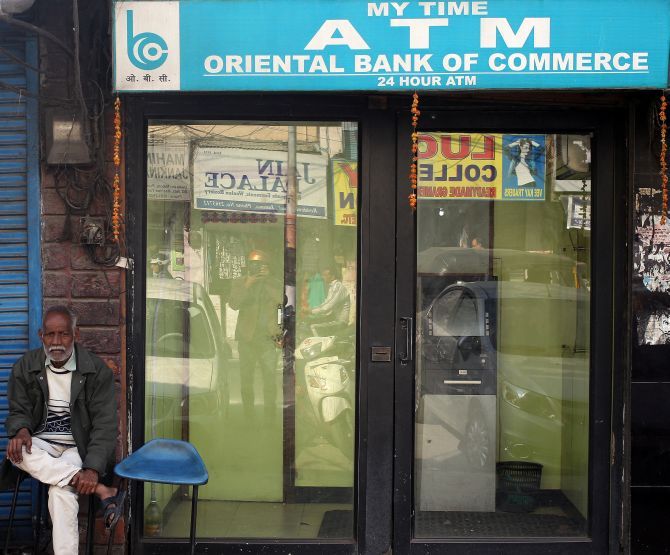 IMAGE: A man waits outside an empty ATM counter which ran out of cash in Jammu. Photograph: Mukesh Gupta/Reuters

The announcement by the government on November 8, 2016, that Rs 500 and Rs 1,000 notes will lose their legal tender status from midnight of that day onward has led to widespread chaos and confusion among the general public.

As per the official announcement, this step has been taken primarily to curb black money generation in the economy, and prevent counterfeiting of notes.

In the immediate short term, following the notifications released by the Reserve Bank of India, people are exchanging the old currency notes in their possession for the new currency notes to the extent of Rs 4,000 (increased to Rs 4,500 on November 13, 2016), and depositing the rest in their bank accounts.

As soon as the Rs 500 and Rs 1,000 notes lost their legal tender status, the entire amount of money held in these notes disappeared, so to speak. These high-value notes constituted 86 per cent of the total currency in circulation in the economy. Needless to say, this is a massive short-term monetary contraction.

So M1, which is the sum of currency in circulation and demand deposits with banks, does not change officially. Total liabilities on RBI’s balance sheet remain the same. However, given the peculiarity of this situation, reality will diverge from the official data.

In reality, given the enormous logistical challenge involved in the process of exchanging or depositing the old currency notes, many people may not be able to turn in these notes by the stipulated deadline. Most importantly, a large amount of the unaccounted money will not return to the system to avoid tax penalties.

In case of the commercial banks, in the short-term their deposits will surge, as has been happening over the past few days because of people depositing any cash excess of Rs 4,000 in their bank accounts. The counterpart of this on a bank’s balance sheet is that its reserves with the RBI will increase. In other words, the amount held under cash reserve ratio will witness a short-term spike.

At the same time, people will withdraw cash for their daily transactions from their bank accounts. Given the strict withdrawal limits as well as the unavailability of cash, bank deposits may exceed the currency in circulation in the immediate short-term. Over the next several weeks, as withdrawal limits are hopefully further relaxed and cash gradually starts becoming more easily available, a large part of the bank deposits may get withdrawn and the banks’ reserves with the RBI will commensurately come down.

The banks also have the option of loaning out the freshly available funds. In the short-term they may not do so because it is still uncertain whether the increase in their deposits is permanent.

Once the dust settles down in the coming weeks or maybe months, the banks may then extend loans from whatever of the fresh deposits would be left. They may also lower their lending rates to facilitate lending, given that credit demand has been low in recent times. If they increase their lending, then the conventional money multiplier will be put to work and money supply will increase. RBI may need to sterilise this using open market operations.

RBI will sell government bonds to the banks to mop up the excess liquidity. This sterilisation comes with a cost because interest will have to be paid on the government bonds.

This will, of course, play out only in the medium-term depending on the state of deposits with the banks once ‘normalcy’ is restored.

Effect on prices and output

The old Rs 500 and Rs 1,000 notes constituted 86 per cent of the total cash in circulation in the economy. This is a significant amount given that India is primarily a cash-based economy. Withdrawal of these notes will act as a major monetary shock to the system. The demand for money can be thought of as: (a) store of wealth, and (b) medium of exchange. It seems the government’s decision to withdraw the Rs 500 and Rs 1,000 notes was based on the assumption that money is primarily used as a store of wealth.

So once they crack down on this motive for holding money, the illicit wealth would disappear. But the fact remains that in India, currency notes have a widespread use as a medium of exchange especially in the vast informal sector.

This brings to fore the Quantity Theory of Money in monetary economics according to which MV = PY holds, where M is the total amount of money in circulation in the economy, V is the transactions velocity of money or the frequency at which currency is used to purchase new goods and services, P is the general price level in the economy, and Y is the level of output in the economy. As a result of the government’s announcement to withdraw the high value notes, M has fallen sharply and presumably the velocity of money will also fall. People are more likely to hoard cash now instead of spending it given the uncertainty of how things will play out over the next few months. So to restore equilibrium in the system, P and Y will have to fall.

There will be a negative effect on consumption demand as people across the board will postpone their purchases for lack of usable cash in hand or even curtail their consumption of non-essential items. This demand shock will disproportionately affect the informal sector of the economy where money is the lifeblood. Those with access to the digital payments infrastructure will withdraw from the cash economy given the inconvenience associated with using cash in the aftermath of this announcement. This will hurt the informal cash-economy even more and make the fall in P and Y more acute.

Small and micro enterprises will be badly hit because for them money is the main medium of exchange. Agricultural supply chains are all cash-dependent and will be majorly disrupted. Daily wage workers, street vendors, small shopkeepers, and the like will face misery. Most of them do not have access to bank accounts and live on cash payments from their employers or customers who in turn are not able to access cash now. Several of these businesses will fail.

A large number of firms surviving on trade credit may not be able to repay their creditors for lack of access to usable cash and will default. Failure of businesses in the informal sector will affect employment and will also have a ripple effect on the firms in the formal sector. Gross Domestic Product from the informal as well as the agricultural sectors could be hit for several quarters.

As consumers reduce their purchases, sellers across the board will be left with unsold inventories of goods and soon they will be under pressure to dump their stocks. This will put a downward pressure on prices as well as output. There will also be a significant erosion of wealth due to the withdrawal of the old currency notes. This in turn will negatively affect the consumption of goods such as housing, consumer durables etc, whose prices will also fall.

India has hardly ever had to deal with a Consumer Price Index deflation. Sustained CPI deflation or even low inflation triggered by a demand shock as this, can often lead to economic stagnation and aggravate unemployment. It also increases the real debt burden of firms and consumers thereby reducing their purchasing power.

The announcement by the government to withdraw the Rs 500 and Rs 1,000 Rupee notes from circulation overnight has triggered a contractionary demand shock, which will lead to a fall in prices and output over the medium-term. How fast the effects of the shock will get reversed and ‘normalcy’ will be restored depends largely on how fast the RBI is able to replenish the currency notes and people are allowed to withdraw money freely. Going by what we are seeing around us, this could take several months.

Two parallel currencies seem to have emerged in the economy right now -- bank deposits and cash. People can convert cash into bank deposits, but there are legal (and logistical) limits to convert bank deposits into cash. There is plenty of liquidity in the system most of which is locked up in bank deposits. The key to restore stable monetary conditions is to unlock this cash liquidity, which can only be done by restoring the currency in circulation.

The new Rs 2,000 notes issued by the RBI will not help ease the shortage of transactions currency because change in smaller denominations is hard to come by. The urgent need of the hour is for RBI to increase the supply of cash in denominations that can aid transactions, that is, Rs 500 or smaller, increase the limit on how much cash can be exchanged for usable notes, and increase the daily and weekly withdrawal limits.

The longer it takes for RBI and the government to stabilise monetary conditions in the economy, the more severe and long lasting will be the damage caused to various sectors of the economy, especially to the informal sector.

Money is used not just as a store of wealth but also for transactions. The government may have overlooked this important fact about the Indian economy while announcing this ban.

While the claimed benefits of this sudden move range from curbing black money to reducing counterfeiting of currency notes to encouraging a move towards a cashless economy, it is hard to say at this stage whether in the medium- to long-term the benefits will be worth the costs borne by large sections of the population.

Increasingly, it seems the costs may far outweigh the benefits.

Rajeswari Sengupta is an assistant professor of economics at the Indira Gandhi Institute of Development Research. 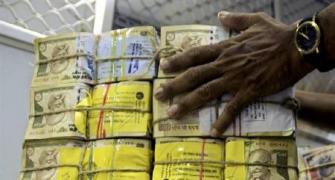 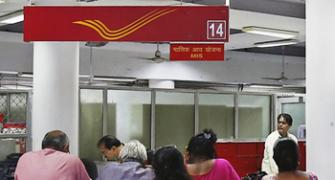