Rupee volatility could be dampened if it is steadily manoeuvered to levels consistent with inflation differentials, say Jaimini Bhagwati and Abheek Barua 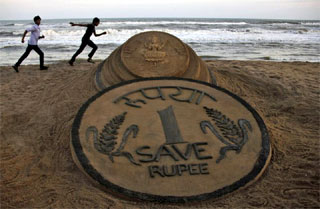 In the recent past, commentaries in this newspaper have warned that the rupee's real effective exchange rate (REER) has become substantially overvalued over the last 10 years. A counter-argument has been that the rupee would be found to be fairly valued if estimates using trade-weighted consumer price inflation differentials are adjusted for productivity gains, as suggested by Balassa and Samuelson in the mid-1960s.

One approach is to adjust the rupee's REER for changes in productivity, and we refer to such calculations in this article as "point-to-point" estimates. A second approach is based on the purchasing power parity (PPP) concept, which provides a benchmark for estimating equilibrium exchange rates. Such "equilibrium" values of currencies are postulated to be based on fundamental factors, such as terms of trade, productivity differentials, current account balances and net foreign currency flows.

We find the rupee's point-to-point REERs, adjusted for productivity, range from overvaluation to undervaluation depending on the measure used to assess changes in productivity. The equilibrium approach, too, indicates a dispersion of values for the rupee.

Table I lists the extent of rupee over- or undervaluation using point-to-point REER estimates with and without different measures of productivity changes and indicators, such as terms of trade, fiscal balance, current account and net foreign currency flows.

The numbers in tables I and II have been estimated by Shuheb Khan and Shilpi Kumar of the Indian Council for Research on International Economic Relations (ICRIER). (Further details about the underlying computations will be available in a forthcoming ICRIER working paper.) Rows 1 and 2 in table II use vector auto regression, or VAR, and vector error correction models, or VECMs, which are standard approaches in time series econometrics.

In row 1 in table I, the 21 per cent overvaluation estimate of the rupee from 2004 to 2014 is based on trade-weighted Consumer Price Index (CPI) differentials between India and six other countries and is not adjusted for productivity changes. In row 2, changes in productivity measured by per capita income are included and the rupee is found to be undervalued by eight per cent. 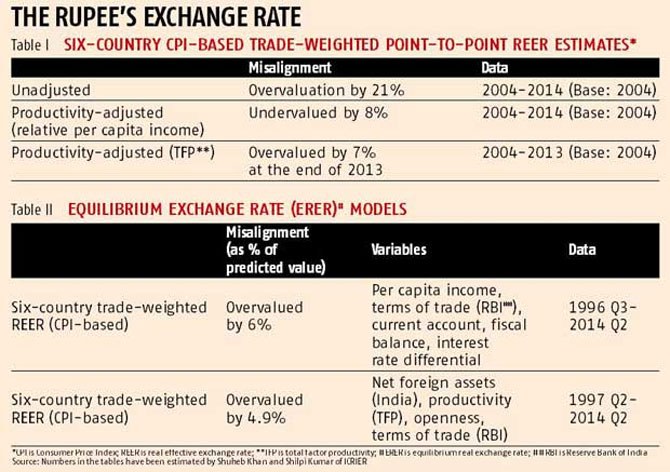 The use of per capita income as a proxy for productivity may be valid for economies with similar levels of growth. However, using this measure to make adjustments for the currency pair of a developed economy such as the United States - typically associated with low growth rates - and an economy like India - which is at a low base and is, thus, expected to grow faster - will almost invariably lead to an undervaluation bias for the currency of the faster-growing economy. This can be misleading and, thus, a relatively direct measure of productivity such as total factor productivity (TFP) is probably more suitable.

A handy evaluation of various versions of equilibrium exchange rates is available in a 2006 working paper from the National Bureau of Economic Research titled "Models of equilibrium real exchange rates revisited: A selective review of the literature" by Reza Siregar and Ramkishen S Rajan. For instance, Sebastian Edwards defined an equilibrium real exchange rate (ERER) as the "relative price of tradable to non-tradables that, for given sustainable (equilibrium) values of other relevant variables - such as taxes, international prices, and technology - results in the simultaneous attainment of internal and external equilibrium".

The 2006 paper reported that according to various models, the Chinese currency was undervalued at that time by between 30 and 40 per cent vis-à-vis the dollar and between 15 and 20 per cent on a real trade-weighted basis. Is it too cynical to wonder that if any large emerging economy has recurring trade surpluses (China) or the potential for the same (India), a model can be devised that shows that its ERER is undervalued?

A May 2005 Goldman Sachs paper titled "A global approach to equilibrium exchange-rate modelling" suggests that for emerging economies "in equilibrium, the real exchange rate will be affected by relative productivity, terms of trade, long-term foreign financing, trade openness and G3 real interest rates". This paper reported that as on May 13, 2005, the dollar was fairly valued, most Asian currencies were substantially undervalued and that the rupee was 10 per cent undervalued.

The models that we have used in table II follow the behavioural effective exchange rate (BEER) approach, which posits a balanced current account. Misalignment, if any, is attributed either to temporary factors or deviations of economic fundamentals from sustainable values. We find that the extent of rupee overvaluation is dependent on the variables that need to be in balance and the measure used to gauge relative productivity changes over time.

To sum up, the ERER- and BEER-type exchange rate models add to a better understanding of the factors that impact exchange rates. However, since these and other equilibrium models provide widely differing results, little value is added in assessing the extent of exchange rate misalignment. On balance, relatively simple productivity-adjusted REER point-to-point estimates are likely to yield more meaningful results than more complex models. We believe that using a comprehensive gauge for productivity such as TFP is more accurate than a measure such as per capita income.

Based on this line of reasoning, we conclude that the rupee is currently overvalued by at least seven to eight per cent even taking into account the nominal exchange rate of rupees 63.6 a dollar as on December 17, 2014. The sharp downward correction in the rupee's value of about 3.5 per cent over the last three days is precisely what spikes anxiety among market participants. This undesirable level of volatility could be dampened if the rupee is steadily manoeuvred to levels that are consistent with CPI inflation differentials. 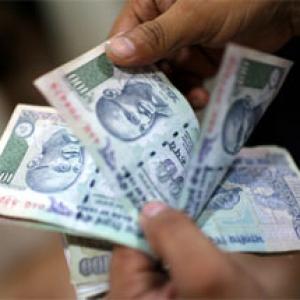