India shining: A 7.4% growth despite reeling under huge debt

Public investment financed by the government's own or borrowed resources do not provide an adequate answer to the problem of relatively low investment, notes TN Ninan. 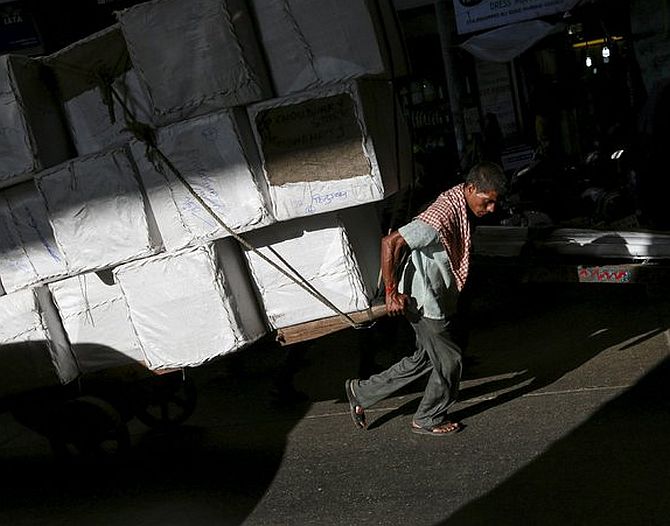 A porter pulls a handcart loaded with goods at a market in Mumbai. Photograph:Danish Siddiqui/Reuters

In the last few years of Manmohan Singh’s prime ministership, many businessmen used to talk of a paralysed government.

Today the boot is on the other foot, because the problem seems to be a paralysed corporate sector.

Most of the leading business houses are so weighed down with debt that their balance sheets cannot support or bear the load of fresh investment.

Numbers across the corporate sector show a sharp decline in profit levels, to about 3% of GDP — the lowest such level in more than a decade.

The result shows in what this newspaper reported on Friday: fresh investment by the corporate sector has nosedived. Even companies that do not have a debt problem or shrunken profits are often constrained by unused capacity.

As the Reserve Bank governor pointed out in the second half of November, factories are running at 30% below capacity.

With high levels of debt, reduced profits and poor capacity utilisation levels, it should not be a surprise that the corporate sector has a shrinking investment portfolio.

The positive way to look at the scenario is that companies have improved their cash flow situation, precisely because they have cut back on capital investment.

This means that they will be able to write down their debt and ease the financial logjam.

The second positive is that there is a decline in the rate of accretion of fresh “distressed” assets in the banking system.

This point has to be a qualified one because it is more than likely that banks have not disclosed the full extent of the problem with distressed assets.

Still, it may well be that the ascending curve of bad and restructured debt has indeed reached an inflection point.

So it is doubly unfortunate that the talk in business circles is about how many Indians have chosen to become non-residents during 2015.

The reported number is astonishingly high — 80,000 emigrations in the course of the year.

The talk in business circles is that the reality may be closer to 50,000-60,000. But even those numbers are exceptionally high, and matched by a surge in the legitimate transfer of assets overseas.

The causes for the exodus appear to be two-fold: the new, much tougher black money law applicable to all those with assets abroad, and confusion over a change in the rules regarding the principal place of business for overseas corporate bodies.

Many people are simply playing safe; their exit reduces the possibility of any future inflow of money held abroad, and negates the prospect that was held out at election time, of vast sums flowing back into the system.

The government’s stance in the face of uncertain prospects for the private sector has been that public sector investment will drive the system.

Much hope has been placed on new highway projects that are being cleared, an anticipated surge in investment by the railways (funded by the Life Insurance Corporation) and clearance of the power sector’s demand constraint through the “Uday” package worked out by the power minister for helping power distribution companies get rid of their debt overload.

Meanwhile, the environment minister has been doing his bit by easing regulations bit by bit. However, these initiatives do not over-ride the contractionary fiscal stance that is implicit in the push to reduce the fiscal deficit, and cannot also skirt the lending constraints that some of the banks face on account of an eroded capital base.

In other words, public investment financed by the government’s own or borrowed resources do not provide an adequate answer to the macro-economic problem of relatively low investment.

It is a minor miracle that an economy constrained by reduced investment levels can still hope to achieve 7.4% economic growth. 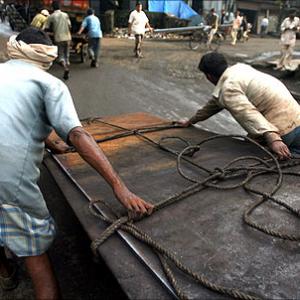 Why India's economic growth slowed down and what lies ahead