This is a surprise! How did Jayasuriya suddenly become No. 1?

The answer is simple. As the Super Eight gets under way, all the players who have gone home are also out of the MVP list.

This new list features only players of the teams that made it to the Super Eight, and the statistics are drawn only from league matches featuring Super Eight teams; e.g. Australia vs South Africa or Sri Lanka vs Bangladesh (recall that Jayasuriya scored 109 in 87 balls against Bangladesh).

*Run outs are counted as 1 for a direct hit, and 0.5 if the fielder is an equal participant in a run out dismissal.

"Jayasuriya", "Hayden", "de Villiers", "Clarke", "Chanderpaul" and "Ponting" have round, smiling faces and wide noses, typical of pure batsmen. "Smith", another pure batsman, has lost his smile because he bowled two expensive overs.

"Styris" is the batting allrounder with the taller nose and bigger ears, while "Gayle", who hasn't scored too many runs, is looking almost like a bowler with a tall nose, big ears and a tapered face.

To see the faces of the nine highest scoring batsmen in the Super Eight, click here.

To see the faces of the nine highest wicket-taking bowlers in the Super Eight, click here.

Finally, take a look at the graph below: 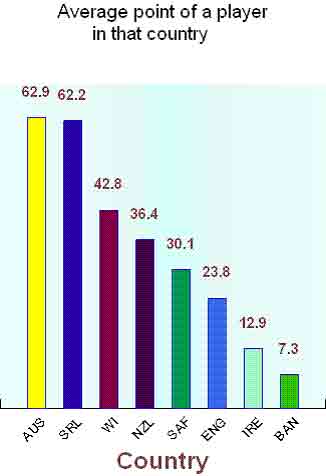 This chart shows the average MVP points of the players whose teams have made it to the Super Eight.

It would be tempting to read off possible semi-finalists from this list, it's really too early for that.

Sri Lanka have got these high points against Bangladesh, and West Indies against Ireland. So expect their average to fall. On the other hand, expect South Africa's average to rise because they've already played the toughest Super Eight team: Australia.

Once a few Super Eight matches are played this chart could indeed start pointing towards the possible semi-finalists.

Would you like to join the Cricket and Cricket Lovers Discussion Group and discuss your cricket views with other cricket freaks? Click here. Have fun!