There is practically no change at the top, except Jeremy Bray dropping off from the seventh position to 36th after he scored just 3 runs on Saturday against Pakistan.

Herschelle Gibbs, therefore, gains a face in the Chernoff gallery of the top nine players.

Bangladesh's Mashrafe Mortaza is placed at 11th, and he deserves to be there for the outstanding value he brings to the Bangladesh team and with a little help from India's generous captain Rahul Dravid who offered him first use of the juicy wicket, and the charitable Virender Sehwag who's willing to offer his wicket to the first bowler who comes running in.

Finally, here are the Chernoff faces after day 5. Round faces, a wide nose and small ears are some of the attributes of pure batsmen -- "Jacques Kallis", "Ricky Ponting"; tapered faces, tall noses and big ears indicate pure bowlers -- "Farvez Maharoof".

The all-rounders have a mix of these attributes. South Africans currently own four of the nine faces, but expect more Australians on Monday after their game against the Netherlands. 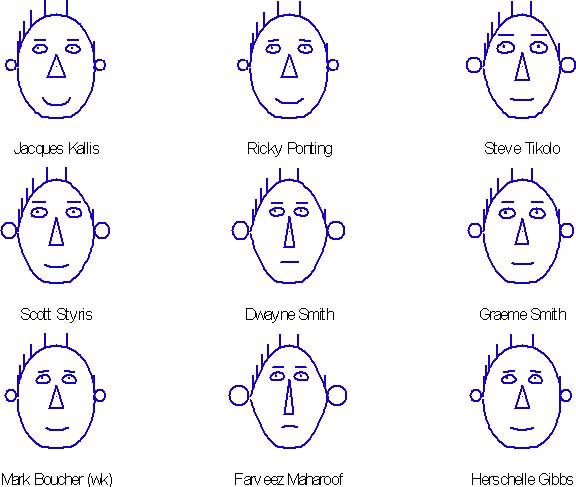 I thank my colleagues Debasish Ghosh and K Anil Kumar of Cranes Software International Limited for turning up on a Sunday morning to prepare this material.

Would you like to join the Cricket and Cricket Lovers Discussion Group and discuss your cricket views with other cricket freaks? Click here. Have fun!