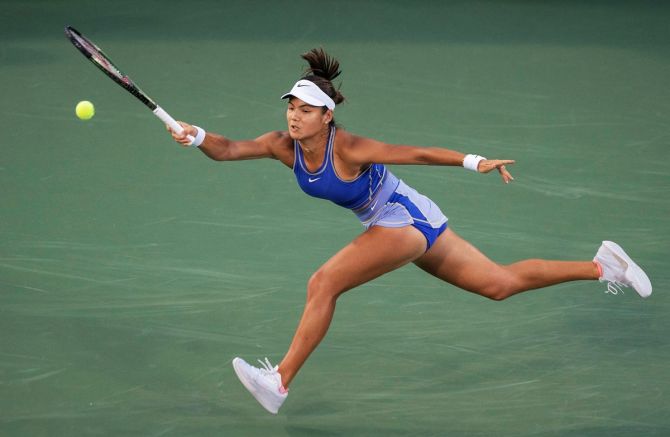 Emma Raducanu stormed into the third round of the Cincinnati Open with a 6-0, 6-2 thrashing of Victoria Azarenka on Wednesday, signalling she will be well prepared for her US Open title defence.

For the second straight match Raducanu delivered a dominating display, the 10th seed needing just 62 minutes on centre court to dismiss the twice Australian Open winner from Belarus after thumping Serena Williams 6-4, 6-0 in the first round.

"I was playing a great match for sure and to play Vika I had to stay focused throughout," said Raducanu in a post-match on court interview. "In the second set I could feel the important moments and a couple of turning points that could have made the second set really difficult.

"I am really pleased with how I dug in and serving it out in that last game was really difficult."

Raducanu, who has not won a tournament since capturing last year's title at Flushing Meadows as a 150th-ranked qualifier, appears to again be hitting her stride with the season's final Grand Slam running from Aug. 29 to Sept. 11 in New York.

After committing just one unforced error in her match against Williams, the 19-year-old Briton was again firing on all cylinders as she raced out to 6-0, 4-0 lead before Azarenka, twice a winner of the event, was able to hold serve and avoid the embarrassment of a double-bagel exit.

Looking every bit like the player who stunned the tennis world a year ago with her magical run in Flushing Meadows, Raducanu had all parts of her game working, laying down five aces and unleashing a barrage of returns and flurry of winners. 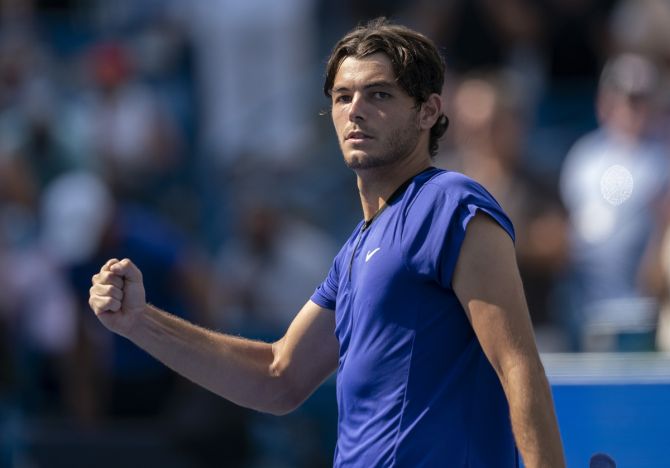 Rafael Nadal lost 7-6(9), 4-6, 6-3 to Borna Coric at the Cincinnati Open on Wednesday in the Spaniard's first match since pulling out of the Wimbledon semi-finals due to injury, dealing a big blow to his preparations for the U.S. Open.

The 22-times Grand Slam winner had been hoping to get as many matches under his belt as possible after returning from an abdominal injury but losing to the Croat means he heads to Flushing Meadows well short of competitive action.

Taylor Fritz blasted his way to a 6-3, 6-2 win over Australian Nick Kyrgios while Cameron Norrie fought back to beat former world number one Andy Murray 3-6, 6-3, 6-4 in an all-British clash.

After an hour-long rain delay, Coric, who returned to the Tour in March after a lengthy absence due to a shoulder surgery, edged a nail-biting tiebreaker to take the opener after each players had saved two set points.

With the crowd firmly behind Nadal, the 36-year-old roared back into the contest by breaking former world number 12 Coric's serve midway through the second set to force a decider.

But Coric, now ranked 152nd, got his only break of the left-hander's serve for a 4-2 lead and then sealed his spot in the third round with an inside-out forehand winner on his first match point after two hours and 51 minutes.

"It has been very, very special," Coric said after his victory over world number three Nadal, who won the Australian and French Open titles in an injury-plagued season.

"I was honestly just looking forward to playing this match as I haven't had that in the last two years. Now that I won, it's kind of crazy."

Coric will next play another Spaniard in Roberto Bautista Agut, who defeated home hope Marcos Giron 6-3, 6-3.

The upset of the day went to American wild card Ben Shelton after the 19-year-old continued his dream ATP Masters debut with a 6-3, 6-3 win over world number five Casper Ruud.

A day after taking down Lorenzo Sonego, the 229th ranked Shelton needed just 68 minutes to beat Ruud and advance to a third-round match against fellow left-hander Norrie.

American number one Fritz sent down 16 aces to come out on top against Kyrgios, with the Australian firing just seven of his own and offsetting most of those with six double faults.

The 11th-seeded Fritz needed just 51 minutes to hand Kyrgios his second defeat since losing to Novak Djokovic in the Wimbledon final.

Such was Fritz's domination on serve that Kyrgios could not muster a single break opportunity, while the 24-year-old American converted three of his seven chances.

"It feels great to have my game come together today," said Fritz. "That’s the kind of match I really needed to give me a lot of confidence going into the next match, going to the U.S. Open, a lot of things are clicking for sure."

Fourth seed Stefanos Tsitsipas of Greece sailed into the third round with a 6-3, 6-4 victory over Serbian Filip Krajinovic while Pole Hubert Hurkacz, runner-up in Montreal on Sunday, lost to his doubles partner this week, American John Isner, 7-6(5), 6-7(5), 6-2.

It was a good day for Canada with both seventh seed Felix Auger-Aliassime and Denis Shapovalov picking up victories.

Auger-Aliassime cruised past Australian Alex de Minaur 6-3 6-2 while Shapovalov rallied for 3-6 6-4 6-3 win over in-form American Tommy Paul to register back-to-back victories for the first time since May.

Shapovalov will take on world number one Daniil Medvedev next while Auger-Aliassime meets Italian Jannik Sinner.

The 42-year-old Williams, twice champion at Flushing Meadows, returns to the U.S. Open for the first time since 2020. Her sister Serena, the winner of 23 Grand Slam singles titles, could bring the curtain down on her remarkable career in New York.

Serena Williams announced her forthcoming retirement last week in Toronto, saying she was "evolving away from tennis", although she has not specifically said the U.S. Open will be her final tournament.

Coming back from an ankle injury that has sidelined her for much of the season, Kenin, the 2020 Australian Open winner, has seen her world ranking drop from number four to its current 412 and she has not competed at the U.S. Open since 2020.

Austrian Thiem, who rallied from two sets down against Alexander Zverev to win the 2020 U.S. Open, is also returning from a long injury layoff that has seen his world ranking drop to 228.