Sharath Kamal and Sutirtha Mukherjee will lead the men's and women's teams respectively. 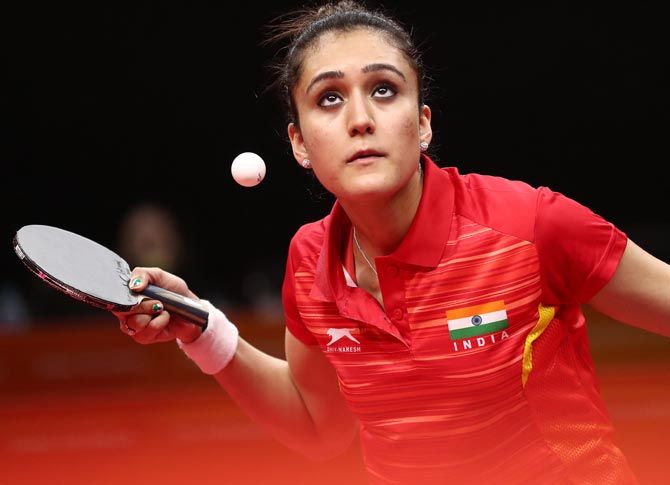 IMAGE: Olympian Manika Batra was omitted from India’s squad for the Asian TT Championships as she did not attend the mandatory per-tournament preparation camp. Photograph: Jono Searle/Getty Images

Star paddler Manika Batra was left out of India's squad for the Asian Table Tennis Championships, beginning September 28 in Doha, after failing to attend the mandatory National camp in Sonepat.

In the absence of the world No. 56-ranked player, 97th-ranked Sutirtha Mukherjee will lead the women's team. The other members are Ayhika Mukherjee (ranked 131) and Archana Kamath (132).

Powerhouse China is not taking part in the event, raising medal hopes in the men's team event, which includes singles and doubles competition.

The Table Tennis Federation of India had made it clear that any player not attending the camp will not be considered for selection. The team was picked on Wednesday and subsequently published on the TTFI's website.

The federation has made attendance at camps compulsory after the Tokyo Olympics.

Manika had informed the federation that she would like to continue training with her personal coach in Pune.

The Khel Ratna awardee had made match-fixing allegations against National coach Soumydeep Roy, saying he asked her to throw a match during the Olympic qualifiers.

The TTFI has formed an inquiry panel to probe the allegations.

Sathiyan, Desai and Sutirtha joined the national camp late due to different reasons. Sathiyan was playing in Poland, Harmeet was in Germany while Sutirtha was down with fever.