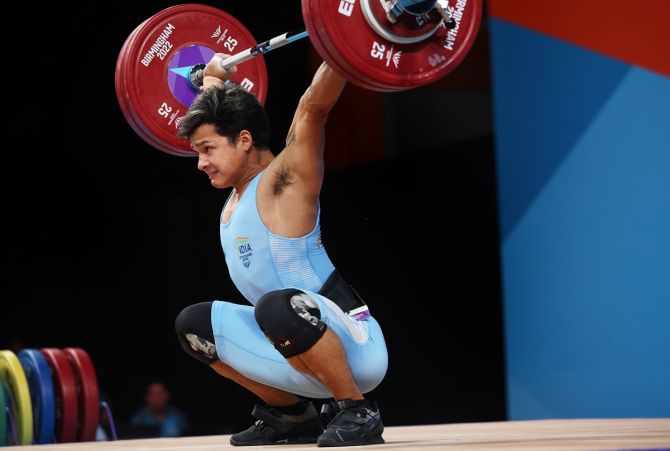 The reigning Youth Olympic champion first bettered the snatch mark with a successful 140kg attempt and then lifted 160kg in clean and jerk to take his aggregate to 300kg, which is a new Games record in the men's 67kg competition.

A massive 7kg difference from his nearest rival Samoa's Vaipava Ioane (127kg +166kg) summed up the dominance of the 19-year-old, who first made headlines by winning a historic gold at the Youth Olympics in 2018.

This was India's fifth medal, and second gold from the weightlifting arena at the National Exhibition Centre. 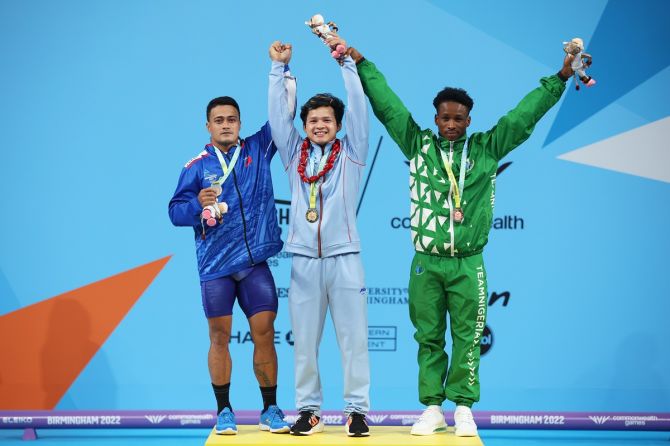 Watched on by her idol Mirabi Chanu, Jeremy dominated the snatch but the stiff competition in clean and jerk made it a thrilling contest.

What added to the anxiety was cramps he suffered during his clean and jerk effort as pulled his thigh and hamstring muscles.

"I completely blanked out and was clueless what was going around me. I was like blind and cried a lot (after the failed attempt)," Jeremy said after winning the gold.

"I never followed the other lifts, it was so painful. Crying out aloud, I asked the coach 'medal aya ke nahin?' (Did I get a medal?) coach sir told me 'gold hai hamara' ('you have won the gold) and it soothed my nerves."

"Coach sir (Vijay Sharma) was amazing, he managed all the weights and ensured that I landed the medal safely. He was very calculative, and there were never self-doubts."

"It seems I'm in a different world now and living a dream. It's my first major competition at the senior level after the Youth Olympics," he added.

In the absence of formidable rival Talha Talib from Pakistan, who is suspended due to doping, Jeremy hardly faced any compeition in the snatch. He took a 10kg cushion leading into the clean and jerk. 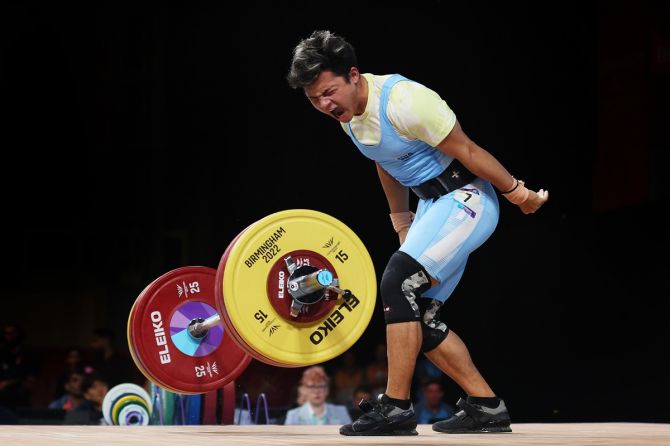 Having started out with a carefree lift of 136kg, the Mizoram 'boy' smashed the Games record lifting 140kg in his second attempt and went back into the tunnel, thumping his chest and sporting a wide smile.
Thereafter, he attempted 143kg in his bid to improve his best effort to 141kg (Commonwealth Championships Tashkent, December 2021).

He however could not hold on to his balance and was adjudged 'no lift' to settle for 140kg that still was a healthy 10kg ahead of his fancied Nigerian rival Edidiong Umoafia, who managed 130kg after two failed attempts.

In the clean and jerk, Jeremy first lifted 154kg and followed it up with 160kg, which was still six kilograms below his personal best but good enough for the Games record.

He could not lift 165kg and tumbled on the board but still there was no competition for him even as the Samoan tried to give him some challenge after lifting 166kg in his second attempt.

Son of junior national champion boxer, Lalneihtluanga, who was born in Aizawl in 2002, sports became natural to him.

From his "first love" boxing he had to make a difficult switch to weightlifting and has not looked back after joining the Army Sports Institute.

"I still box in the ring and love it, but looking at my fellow friends' passion I chose weightlifting," he said.

The real journey will start for him now as he now makes a transition to the Olympic weight category of 73kg.

"I now know it's at a different level. I've a lot to improve and the most difficult part is to gain weight. If all goes well and I stay injury-free then I should be there for the Paris Olympics," he signed off.