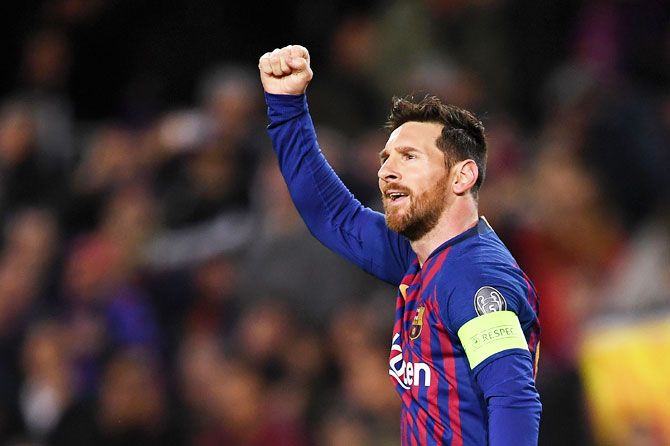 Barcelona captain Lionel Messi was showered with praise by his coach Ernesto Valverde and losing manager Bruno Genesio after a headline performance in his side's 5-1 win over Olympique Lyonnais to reach the Champions League quarter-finals.

Messi opened the scoring at the Nou Camp with an audacious chipped penalty then restored control in the tie after Lyon had pulled a goal back to make it 2-1, hitting a decisive third goal after a trademark dazzling run to shake off four defenders.

The Argentine, who at the start of the season promised to "do everything to bring that beautiful trophy back to the Nou Camp" tore through Lyon's back line twice more to tee up further goals for Gerard Pique and Ousmane Dembele.

"We are all psyched up for the Champions League and so is Leo. He produced an outstanding performance tonight, he was incredible," Barca coach Ernesto Valverde told reporters.

Lyon coach Genesio added: "Tonight Messi was in Champions League mode. He's a genius and can do things that nobody else can. Sometimes he is just unstoppable."

Messi had seen his record of eight hat-tricks in the Champions League equalled by Cristiano Ronaldo a day earlier in Juventus' 3-0 win over Atletico Madrid.

The Argentine began the game with serious intent, forcing Lyon goalkeeper Anthony Lopes to beat away a thumping shot in the opening minutes. He combined fluidly with strike partner Luis Suarez and nearly put the game to bed at the start of the second half when he beat Lyon substitute keeper Mathieu Gorgelin but saw his shot cleared off the goalline.

He had two opportunities to match Ronaldo and complete a treble as Lyon continued to crumble, but chose instead to set up Pique and Dembele.

"We went out to take the game to them from the very start, we moved the ball quickly and we were at our very best," Messi said.

The five-time world player of the year has not hoisted the Champions League trophy since 2015, while Ronaldo has won it four times in the last five seasons with Real and has staked his claim to win it again with Juventus.

"What Cristiano Ronaldo and Juventus did was unbelievable. I thought Atletico would be stronger, but Juve walked all over them and Cristiano had a magical night," Messi said of his longtime rival to the claim of being the world's best player.

"But every team left is difficult, so let's see who we get next."