Get latest news on your desktop
Congratulate Saina
June 21, 2009 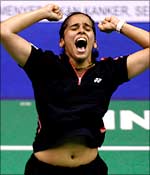 "This is great. I never expected to win," said the world No 8 after her triumph over the world No 3, who had only last week beaten the Indian in the Singapore Super Series."

"It couldn't have been better. I am elated, excited and shocked as well," added the Hyderabad-based girl, who had made it to the Olympics [Images] singles quarter-finals in Beijing [Images] last year.

"In terms of quality, the Indonesian event is as good as the all-England, the Olympics or the World championships with eight of the world's top 10 figuring in it."

Certainly! Saina's triumph is reward for hard work and a moment to cherish for Indian sport.

Join us in congratulating the champion on her latest conquest.