Syed Firdaus Ashraf/Rediff.com finds out how the government is seeking to change the RTI Act, and what impact it will have on the Right to Information. 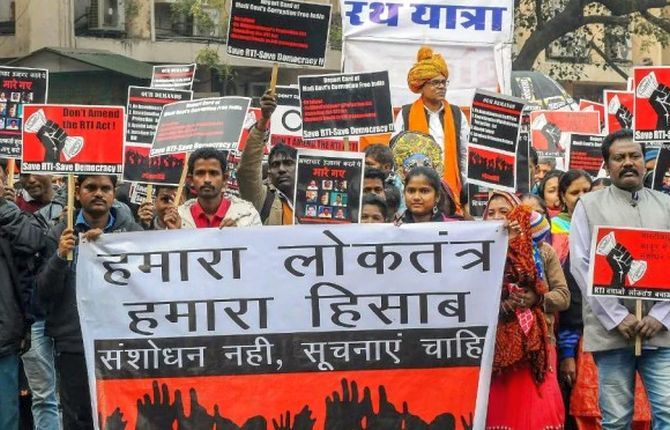 IMAGE: Activists protest against amendments to the RTI Act of 2005. Photograph: PTI Photo

Amid objections by the Opposition and civil rights activists, the Lok Sabha on July 22, 2019, passed the bill amending the Right to Information Act.

The bill proposes to give the government powers to fix salaries, tenures and other terms and conditions of employment of information commissioners at the central and state levels.

The Opposition believes the bill seeks to undermine the authority of the information commissioners and has vowed to oppose it in the Rajya Sabha where the numbers are in its favour.

The Centre may 'achieve its aims' through its majority, Gandhi added, but in the process, it would be disempowering each and every citizen of the country.

These commissioners are independent and cannot be influenced by the government under the current Act.

No has been spared under the ambit of the RTI Act.

This forced the Bharatiya Janata Party to released Modi's degree certificates -- one for Bachelor of Arts from Delhi University and the other for Master of Arts from Gujarat University -- to counter repeated allegations made by Kejriwal.

Thanks to the RTI again, Union Minister Smriti Zubin Irani's education qualifications came under the lens.

"Due to these two incidents, the Modi government does not want the RTI," alleges an RTI activist. "The RTI Act is going to die. It is on ventilator now."

So what changes is the Modi government ushering in the RTI Act?

RTI activist Vijay Kumbhar, whose plea exposed the Rs 2,043 crore DSK scam, said there are three main problems with the amendments made to the RTI Act.

Section 13(5), which prescribed that the salary and allowances of the CIC and the IC will be equal to that of the Chief Justice of India and Supreme Court judges respectively, has been amended to state that it will be decided by the central government.

After the amendment to the RTI Act, the information commissioners will be totally dependent on the government for their tenure and salaries, fear activists.

The CIC had been given the status of a Supreme Court judge and the Chief Election Commissioner but with the new amendment, the government will have control over the information Commissioners.

Right now, the CIC can summon any public authority, including the prime minister.

But with the introduction of the new amendments, the CIC may come under pressure while dealing with a powerful public authority.

With the Modi government's amendments, the CIC is reduced to a secretary level officer, and the autonomous nature of the institution will be in danger if the new changes are made into law, say activists.

It sets the term for state-level CICs and ICs at five years (or 65 years of age, whichever is earlier).

The state CIC and ICs's tenure in office and salary will be decided by the central government.

Like with the Central Information Commissioner and the ICs, the central government will now decide the terms of their state-level counterparts as well.

It gives the power to the central government to sack state chief information commissioner any time, as well as decide their emoluments.

It empowers the central government to, by notifying in the official gazette, make rules to carry out the act, including the salaries and allowances payable and service conditions of officers and staff in the information commissions, and for appeals disposal procedure.

With the amendment, the government can also make changes in the terms of office of the CIC, ICs at both the central and state levels, as well as the salaries, allowances and other terms and conditions, through a notification in the official gazette.

What this amendment does is that the government does not have to go to Parliament to make changes in the terms of appointment.

Carrying out changes by notifying in the official gazette makes the process easy, and not subject to any scrutiny.

Commenting on the new amendments to the RTI Act, activist Anil Galgali said, "Any political party while in power opposes RTI, and the same party when they are in Opposition wants RTI."