Nandigram, 126 km south of Kolkata, is Suvendu Adhikari's bastion, where he has vowed to defeat Mamata Banerjee by 50,000 votes or quit politics.
Ishita Ayan Dutt reports. 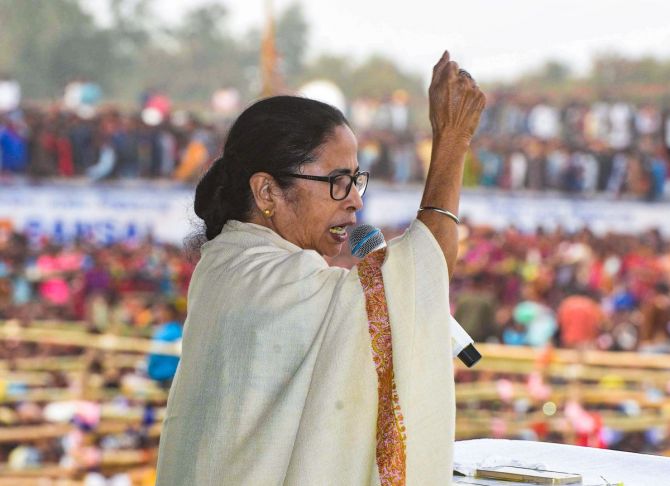 A show of flag power by the Trinamool Congress and the Bharatiya Janata Party is in full display on the road to Nandigram in the East Medinipur district of West Bengal.

Alternating gates from the two parties, giant cutouts of TMC supremo and West Bengal Chief Minister Mamata Banerjee, and posters of her once trusted lieutenant turned biggest challenger, Suvendu Adhikari, make it a riot of saffron and green.

The imagery shows that the poll din is reaching a fever pitch here and the rural hamlet (population: 285,131) -- once a symbol of the land agitation movement in the country -- is back in focus.

This time, ironically, it is the TMC's success in thwarting land acquisition for industry, which brought it power in the state, that is coming back to haunt it.

On January 18 -- months ahead of the upcoming assembly elections in Bengal due in April/May -- Banerjee announced her candidature from the East Medinipur constituency, in a bid to checkmate Adhikari, who could turn out to be her Achilles heel.

Nandigram, 126 km south of Kolkata, is Adhikari's bastion; in 2016, he had contested assembly elections from Nandigram and two earlier Lok Sabha elections from Tamluk, which comprises the assembly segment of Nandigram.

But his clout is more widespread; Adhikari holds sway not only on East Medinipur, but West Medinipur, Purulia and Bankura too, basically covering a large swathe in the south-west of the state.

Therefore, in the many floor-crossings between the TMC and the BJP in the past few months and earlier, he is the most prized catch.

Not surprisingly, Adhikari has said, 'Whether my party fields me or anyone else from Nandigram, I will defeat her by a margin of at least 50,000 votes, or, I will quit politics.'

In Nandigram, Adhikari wields considerable influence on the families of the 14 who were killed in a police firing in 2007 during a violent protest over land acquisition for Indonesia-based Salim group's chemical hub project.

Many remember him as the one who galvanised the land agitation movement under the Bhumi Uchhed Pratirodh Committee platform.

The movement, coupled with the agitation in Singur, ultimately brought an end to a 34-year Left Front rule in West Bengal and catapulted Banerjee to power.

But equations are changing fast in Nandigram, which has a 34-40 per cent Muslim population; once on the same side, Nandigram is now torn between Didi (Mamata Banerjee) and Dada (Suvendu Adhikari); the divide along religious lines is also palpable now. IMAGE: Nandigram in West Bengal is an assembly seat held by Suvendu Adhikari, the Trinamool Congress leader who defected to the Bharatiya Janata Party in January. Photograph: ANI Photo

Away from the poll pitch, 42-year-old Mujibur Rahman has bigger things to worry about; he has a small-time garments unit that stitches raincoats, jackets and PPE suits in COVID-19 times.

Local competition from other factories has shrunk his margins.

With 40-45 labourers under his fold, Rahman can't help but wonder whether the chemical hub project might have brought him more work.

Readymade clothes units, farming and fisheries are the main sources of livelihood for the inhabitants of Nandigram.

Through its land reform initiatives, the Left Front government had redistributed more than a million acres to three million farmers.

Operation Barga, which registered sharecroppers and gave them legal rights to the land, benefited another 1.5 million farmers.

The result: 84 per cent of the land in West Bengal is held by small and marginal farmers.

Small landholding makes land acquisition in West Bengal difficult, what was manifest even in the agitation against the Tata Motors project in Singur; some plots were as small as 0.001111333 of an acre.

But it's not just land owners that have a say when it comes to giving up land for industry in the state.

The 14,000-acre chemical hub was proposed as part of the Manmohan Singh government's initiative to specify a petroleum, chemical, petrochemical investment region and the state had evinced its interest in having the project near Haldia (Left Front parties supported the United Progressive Alliance government in the Lok Sabha).

The chemical hub project required proximity to a port since raw materials had to be imported through a pipeline, which is what prompted the then government to choose a region near the Haldia port.

But Nandigram, like the rest of Bengal, has moved on since then as the Mamata Banerjee government has worked on the basics -- roads, drinking water and electrification.

The problem is, Nandigram needs more than just that.

Local Trinamool leaders concede that the literacy rate in Nandigram is high, but there are not enough jobs.

The local leaders are pinning their hopes on a proposed deep sea port at Tajpur in East Medinipur, as it is expected to generate employment of around 25,000.

Would Nandigram have been served better if the TMC had not supported the land agitation movement? "Nandigram opposed a chemical hub, but it is not anti-industry," local party leaders said.

That could well be a turning point for Nandigram, irrespective of the political outcome of the hotly contested seat.