Mamata Banerjee on Monday declared she will contest the upcoming assembly election from Nandigram, as she took her battle for West Bengal to the home turf of political heavyweight Suvendu Adhikari, who recently quit the Trinamool Congress and joined the Bharatiya Janata Party. 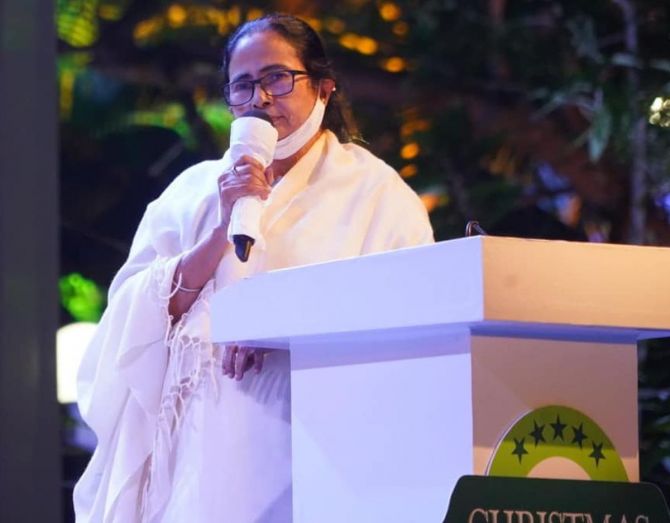 IMAGE: The agitation in Nandigram in the Purba Medinipur district over land acquisition in the late 2000s catapulted Banerjee to power in 2011, ending the 34 years of Left rule. Photograph: Mamata Banerjee/Facebook

That Banerjee chose Nandigram to make the big announcement reflects the TMC supremo's determination to take the BJP, which has launched a spirited campaign to unseat her after a decade-long stint in power, head on.

Addressing a rally, Banerjee said she is not worried about those joining rival parties as they were hardly
around when the TMC was formed.

Banerjee said these leaders left the ruling party to protect the money "they have looted" in the last few years.

Bakshi, who was on the podium, swiftly accepted the request.

Nandigram was the scene of massive public protest against "forcible" land acquisition by the then Left Front government for creation of a special economic zone.

The protracted and often bloody protests added to Banerjee and her party's political heft and catapulted the TMC to power in 2011, marking the end of the Left Front rule of 34 years.

Adhikari is considered the face of the movement in Nandigram.

After switching over to the BJP, Adhikari has often accused Banerjee of having forgotten the people of the area who helped her gain power in the state.

Banerjee is at present the MLA from Bhawanipore in south Kolkata.

"If possible, I will contest from both Bhawanipore and Nandigram. Nandigram is my elder sister and Bhawanipore is my younger sister. I will give a strong candidate from Bhawanipore also, in case I don't fight from that seat," she said.

Banerjee said she would never allow "a handful of people" to sell out Bengal to the BJP.

"Those who have left the party have my best wishes. Let them become president and vice president of the country. But don't you dare to sell out Bengal to the BJP. As long as I am alive, I won't allow them to sell out my state to the BJP," she said.

Without naming Adhikari, Banerjee said he will have to fight the local TMC leaders first before even dreaming of winning the state.

She recalled the struggles she waged in Nandigram and Singur over forcible land acquisition by the Left Front government, and asserted the BJP was committing the same mistake by trying to undermine the farmers' protest at Delhi's borders.

"No one should undermine the farmers' struggle. The BJP is trying to undermine it and will face the same consequences like the Left did because of Nandigram and Singur," she said, and reaffirmed her opposition to the three farms laws.

Attacking the BJP for inducting a raft of leaders from rival political parties, Banerjee said it had turned itself into washing powder where tainted leaders come out clean after joining the saffron camp.

"BJP is the biggest junk party in the country. BJP is not a political party but washing powder. It's using moneybags and intimidatory tactics to lure or coerce TMC leaders into joining them," she alleged.

Referring to the desertions from her own party, she said the BJP might have "bought a few leaders but cannot buy the people of Bengal".

"There are three kinds of leaders-- lobhi (greedy), "bhogi" (hedonist) and the "tyagi" (the one who renounces). The bhogis and lobhis might quit the party, but the tyagis never will. This party is like a mother to us and the tyagis will never ever quit the party," she said.

Banerjee asserted the TMC will win a third straight term in office and the BJP will be decimated.

The TMC supremo alleged the BJP has bought off some media houses which are coming up with fake surveys favouring the saffron party in the assembly elections.

Suvendu Adhikari switched over to the BJP in the presence of Union Home Minister Amit Shah last month, in a reflection of the importance the leader from Nandigram has in the saffron party's scheme of things for the West Bengal elections. He also persuaded his younger brother Soumendu, who was removed as Kanti municipality administrator, to join the BJP.

His other younger brother Dibyendu and father Sisir Adhikari are TMC Lok Sabha members from Tamluk and Kanthi. Both gave Banerjee's rally a miss.

The Adhikaris wield considerable influence in at least 40-45 assembly segments in East and West Midnapore, Bankura, Purulia, Jhargram, parts of Birbhum -- mainly in the Junglemahal region and areas in minority-dominated Murshidabad district. 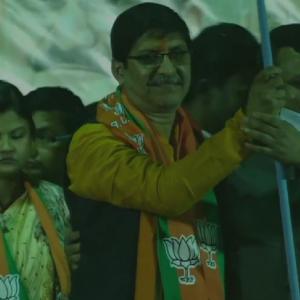