'No other country other than India can do it on this scale.' 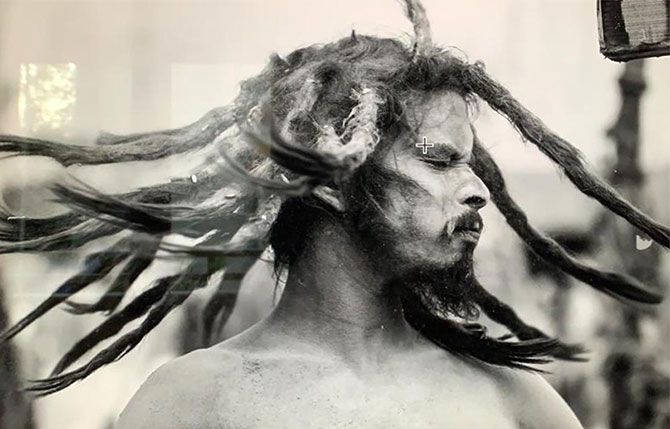 IMAGE: A sadhu swings his dreadlocks after the shahi snan. All Photographs: Kind courtesy Radhika Shastry

"So I did put it on Facebook and wrote that I had baba's permission."

"To meet the other Naga sadhus I had to walk 20 km in the 45 degrees May heat. I wanted to take photographs, they first shooed me off, then every day I spent a couple of hours there."

"They got used to seeing me around and would say 'Tum phir se aa gayi?'"

"I think because I was alone and going every day, they slowly started speaking to me."

Radhika Shastry attended the last two Kumbh Melas and published a book of photographs, Kumbh -- The Greatest Show On Earth.

Radhika -- who now runs a popular cafe in Connoor -- spoke to Rediff.com's Archana Masih about her encounters with Naga sadhus, a morning with the brilliant chief of the transgenders and the sadhu standing on one leg for 6 years with another 6 to go! 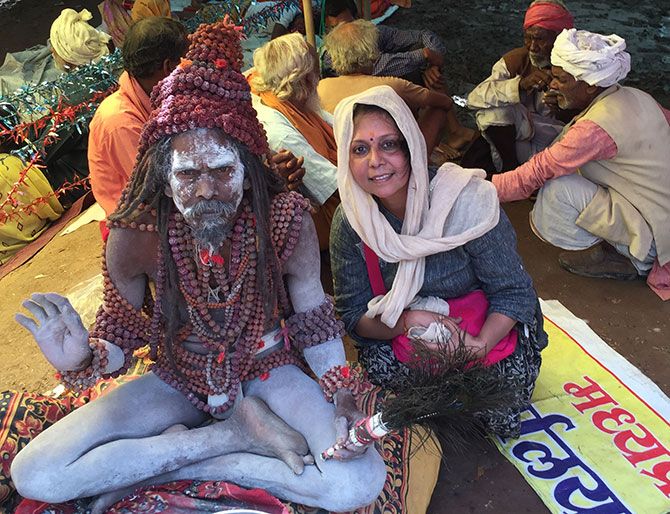 IMAGE: Radhika with a Naga baba. Naga sadhus are not known to bless women by touching their head, but one sadhu blessed her after seeing her walk in the hot sun, requesting a photograph and conversation. He relented after 5 days.

I grew up in Dehradun and as a child one heard about the Kumbh -- and, of course, the Naga sadhus. There was a mystery about the Nagas.

At that time I didn't know that there were four Kumbhs, I just knew about the one in Haridwar because it was close to Dehradun.

These childhood memories kept coming back to me and I wanted to explore why they did. So in 2013, I decided to go for the Maha Kumbh in Allahabad that comes once in 144 years.

I lived and worked in Bangalore at that time and made last minute plans over a weekend in February.

I travelled alone. I had booked a tent and had to walk quite a distance from the airport to where the tent organisers picked me up.

I spent four days at the Kumbh. There was a Swiss couple with three small children in the next tent.

I remember going for dip in the Sangam on a bitterly cold morning. We left the tent at 3 in the morning and walked for around 3 hours to the ghat.

When I was in Allahabad, 10,000 new Nagas were recruited. They are only inducted during the Kumbh in a special ceremony.

IMAGE: 10,000 news Nagas were initiated at the Maha Kumbh in Allahabad in a special ceremony.

'It was the first time that a lady was walking into the sadhus's kitchen!'

I was fascinated by the Nagas and spent my time trying to observe them. I had heard that Nagas are hostile, especially to women.

I tried speaking to them, but they were not inclined. Gradually, they allowed me to photograph them.

My interest in the Naga sadhus is what took me to the next Kumbh in Ujjain.

This time I went to the akhada of Agorhi Baba, which was by the shamshan ghat.

I said I wanted to meet Baba and had come from Bangalore -- and surprisingly I was allowed in.

Baba kept asking me if I was from the media and I kept telling him I wasn't. He told me "Ask, what you want to ask about yourself." I told him, "Baba, I don't want to ask you anything about myself, I just want to know about you."

He told me a little about his life and allowed me to take his picture.

He then told his assistant to take me around. To even show me the kitchen. He did not ask me for any money.

The real Nagas and Agohris, don't ask for money. Whatever they receive, they use it to feed the poor.

The assistant told me while I was walking to the kitchen that Baba never talks like this to anybody and women are not even allowed into the kitchen.

In the kitchen, the staff first refused to let me in and when they were told that Baba Bam Bam had so instructed, they too seemed scandalised.

It was the first time that a lady was walking into their kitchen! 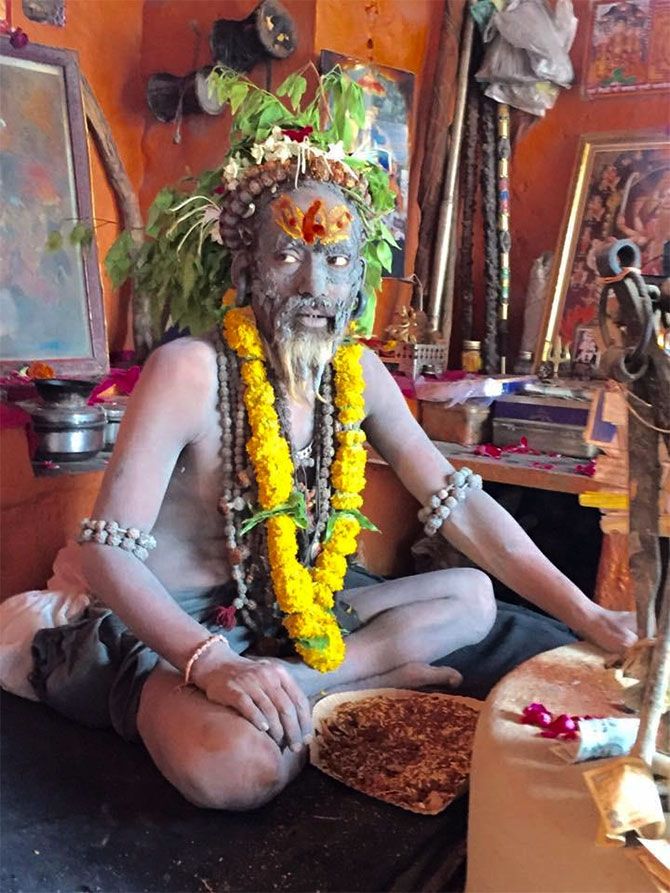 IMAGE: Agorhi Baba Bam Bam Nathji in Ujjain. He allowed his video to be put on Facebook.

Then I went to the hawan kund and other pooja places, took pictures and returned to see the Baba.

He was doing a hawan and I asked if I could take a video and he said, "Kya, Facebook mein dalogi?"

So I did put it on Facebook and wrote that I had Baba's permission.

To meet the other Naga sadhus, I had to walk 20 km in the May heat to the Juna Akhada. I wanted to take photographs, they first shooed me off, then every day I spent a couple of hours there.

They got used to seeing me around and would say "Tum phir se aa gayi" and I used to say I want to take your photographs and speak to you.

They would say "Chali jao!." But I persisted. I think because I was alone and going every day, they slowly started speaking to me.

I was in Ujjain for a week. It was very hot at 45 degrees in Ujjain. There was humungous walking in Ujjain because it was not contained in one space like Allahabad.

By the end, I had become quite friendly with the Nagas. 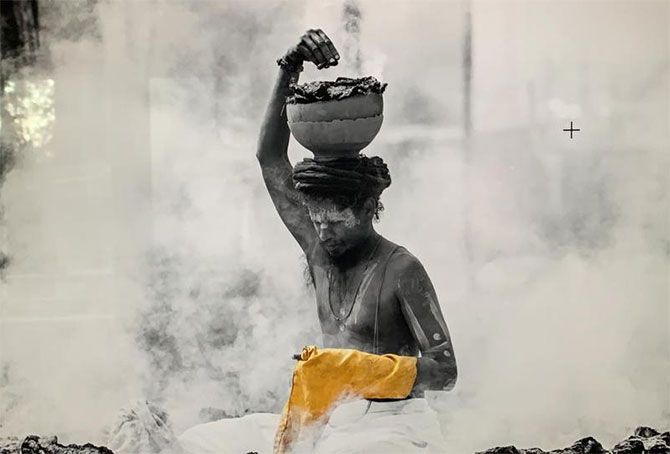 IMAGE: A sadhu doing tough penance with burning cow dung around him. 'It is very difficult to stand there even for a few minutes,' says Radhika.

'Food is free for everybody who comes to the akhadas'

Generally people are suspicious about sadhu babas, but the ones I met at the Kumbh were seriously wise and learned.

They are allotted space in the Kumbh where they set up their akhadas. They put up a stage for their gurus to give discourses.

His administrative people could allot those tents to people. It is like a hotel reservation system. 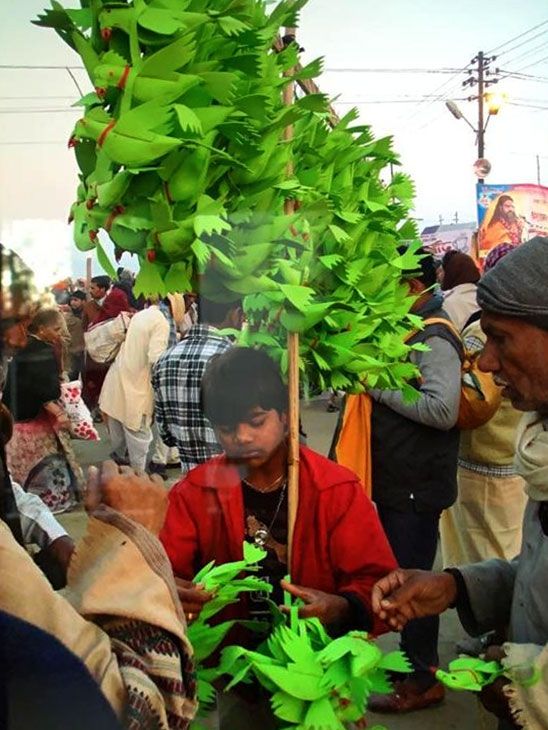 IMAGE: A boy sells toy parrots at the Kumbh.

'The sadhus I met were seriously wise'

I went to an akhada where the baba had just finished his discourse and there was a queue leading up to him. I just joined the queue. It was around 10 pm and the Mela is full on at that time.

There are lights, discourses going on, people are thronging.

I asked if the queue was for Baba's blessing. They said no. It was to ask Baba anything you want. I got nervous because I had nothing to ask and I was inching closer to the Baba.

I had just come from visiting the Triveni Sangam, the confluence of the Ganga, Jamuna, Saraswati and was told the Saraswati was a river in the olden times which has dried up now. That was in my head.

He said "I don't know if there was a river or not, neither am I a geologist or scientist, but what I know is that the Kumbh Mela is going on for time immemorial. In the old days it was a platform for the common man to meet wise men congregated at the Kumbh. All I know is that there was the Ganga and the Jamuna, the third river was the river of wisdom which we know as Saraswati."

He put it so well. Intellectually, many of the sadhus are very superior, the real sadhus are really enlightened.

'The sadhu was standing on one leg for 6 years'

At the Ujjain Kumbh, I met a sadhu who had been standing on one leg for 6 years! His vow was to do that penance for 12 years for the well being of his village.

I then told him that I would meet him at the Haridwar Kumbh after 6 years.

There was an English sadhu who had one hand up for 21 years! He was a Naga. He told me that even though he had been a Naga sadhu for 21 years, the Indians didn't treat him with the same reverence as they did the other Nagas. 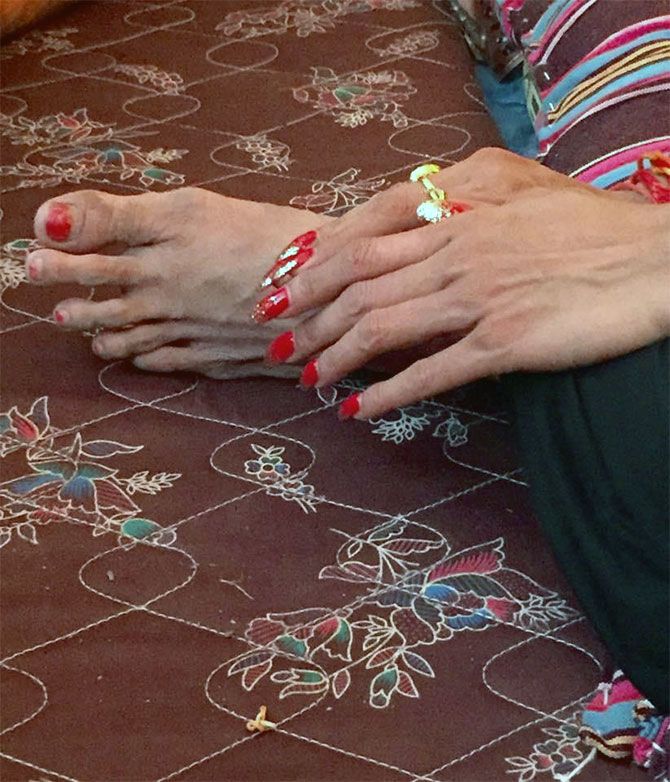 IMAGE: The head of the Kinnar akhada was in a nighty and only allowed her hands and feet to be photographed.

'How I met the chief of the kinnar (transgender) akhada

At the Ujjain Kumbh, the kinnar akhada was set up for the first time. The chief of the akhada was Laxmi Narayan Tripathi.

She was brilliant and speaks several languages. The night before I met her, there was a storm and many tents had blown away.

She did not want to meet anyone, but on hearing that a lady was waiting to meet her, she asked me to come.

She was still in a nighty and told me that no outsider had ever seen her like this.

She was not dressed because she had been helping others till 4 am after their tents had blown away.

She said you can speak with me, but don't take my pictures.

She said she was not dressed and it took her an hour to get ready. So I asked if I could just take photographs of her feet and hands. She had very well manicured hands.

She told me how kinnars were not treated well by their families, but she was lucky to have not got that kind of treatment by her own family. She told me about her life.

'The Kumbh is the greatest show on Earth'

The next Kumbh I will go to will be in Haridwar in 2021. I don't have any specific purpose, but I want to go, I don't know why.

This time I am not going even though the Nagas are going to be there.

The Kumbh is very well organised. There are people who lead you over pontoon bridges to go and bathe at the ghat.

With each year, it seems to be getting more technological expertise and a lot of work goes into organising it.

It is better managed. It is brilliantly organised.

No other country other than India can do it on such a large scale. 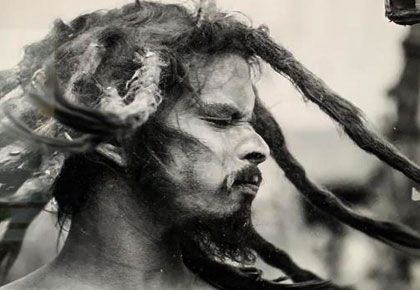