With 103 members belonging to the BJP, the Karnataka assembly will witness a balance it has never seen, points out Abhishek Waghmare. 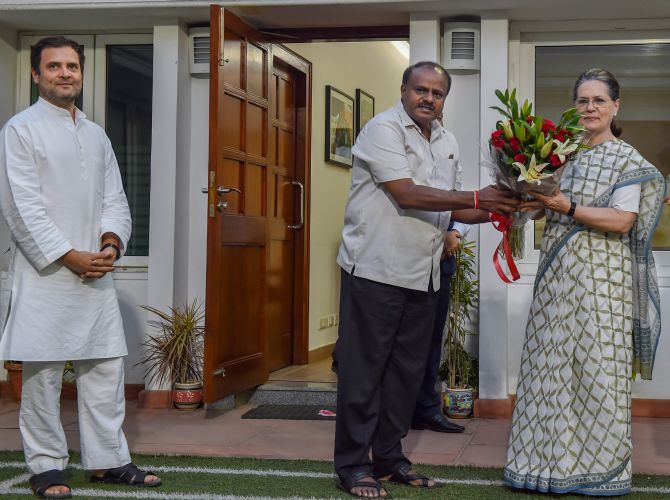 However bitter-sweet the post-election victory or defeat is, beyond politics, at the core, lies the Constitution.

And the Opposition, though it is not a part of the executive, it is an important institution in parliamentary democracy under the aegis of it. And it does influence and impact the executive in ways more than one.

With 103 members belonging to the Bharatiya Janata Party, the Karnataka legislative assembly will witness a balance it has never seen.

The leader of the Opposition, whoever it will be, will be supported by an unprecedented number of legislators.

Till now, since the first election to the newly formed Mysuru state in 1957 (renamed as Karnataka only later in 1973), the Ramkrishna Hegde government of the Janata Party had the strongest opposition of 82 Congress members in the lower House of the bicameral legislature.

Karnataka's legislative assemblies represent the larger political phenomenon of emergence of non-Congress parties in years after Indira Gandhi took over.

In the state assembly, the chief minister's contingent was the strongest immediately post-Independence, while it would be weakest in the 15th assembly post 2018.

The Opposition was the weakest then, but is the strongest today.