Darryl D'Monte mentored more journalists than any other editor of his generation.
Some of the biggest bylines owe their beginnings in our glorious profession to this wonderful human being.
Nikhil Lakshman salutes his mentor.
Illustration: Uttam Ghosh/Rediff.com 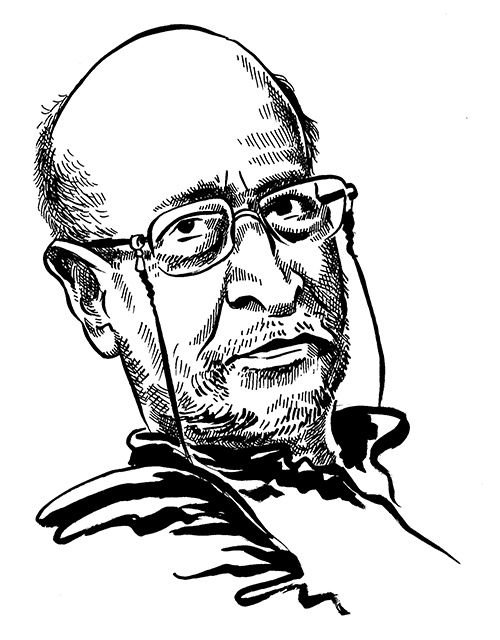 "Do you know how to type?" Darryl D'Monte asked after he had quizzed me about my knowledge of the world.

Filled with the persistent-as-acne arrogance of one's early twenties, I declared, "As Auden said, 'Men like the sight of their own handwriting as much as they enjoy the smell of their own farts'."

In a look that I came to know so well and love, Darryl's mouth curled in a wry half smile, he blinked, as he asked again, "But can you type?"

Like his first cousin Dom Moraes, I said, I could type with two fingers, not wanting to bore him how my parents -- anxious about my future -- had goaded me to enroll in a shorthand/typewriting class, only for me to bail out two days later.

"I hope you know journalists are poorly paid," he mentioned at some later point in the conversation.

We had grown up in the late 1970s on stories about both Ram Nath Goenka's courage, standing up to Indira Gandhi during the Emergency, and his ahem... thrifty nature.

I gulped, nodded, and agreed to begin work at the Indian Express the following Monday.

I consulted my dad who kept an eye on my finances till his death in October 2017. Though he was perturbed by my inability to locate full time employment, my father conceded that 40 rupees a month didn't merit my accepting the Express job.

I called Darryl the next day, mumbled some excuse involving parental ambition as my reason for turning down his offer.

A friend from college -- now a well-known magazine editor and publisher -- met Darryl for a job at the Express.

The subject of remuneration surfaced at some point in the conversation.

Oh, my friend muttered, adding that a friend had thought Rs 450 was for a year.

I was at the British Council library, then down the road from Express Towers, when my friend rushed in.

After first equating my intelligence with genitalia, he said Darryl wanted me to meet him.

"Journalists are supposed to check and recheck what they are told," Darryl admonished me, asking me to join the Express the next day.

When I heard about Darryl's shocking death last Sunday, as I mourned his passage into the ages, I wondered what my life and career would have been had he not been in it. But for his early faith in my ability, his unwavering kindness, his caring mentorship, I would likely not be where I am today.

No editor of that era would have made that call to summon me after my silly mistake. They would have sniggered at my erroneous assumption and written me off. 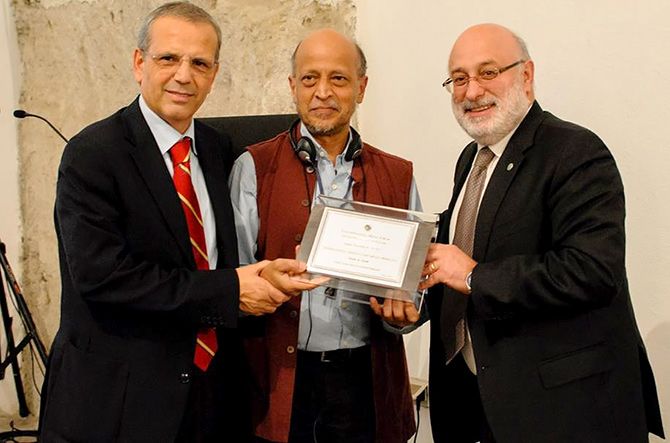 When I first met him, Darryl was just 35, a boy wonder who had made his mark editing the Sunday Review, The Times of India's magazine section, from where Mr Goenka plucked him to edit the Indian Express's Bombay edition.

He was remarkably unpretentious (unlike two of his editor contemporaries who I had encounterd earlier) despite being born to wealth (his family, we whispered, had once owned large swathes of the city's affluent suburb of Bandra) and despite his Cambridge education. He didn't want us to call him 'Mr D'Monte' or 'Sir'. It was always 'Darryl'.

Darryl believed in young people. He was an astute judge of journalistic talent. And he gave you every opportunity to bloom and make a mark, no matter how raw you were.

I was one of the many young people he hired in 1980, many of who are star bylines today. We were a gung-ho lot, fired by our passion for journalism, ever willing to work beyond our shifts, always ready to beat the pavements in search of a story.

At the newsdesk to which I was assigned, I edited reports assigned by the chief sub-editor who sat at the head of an Arthurian desk as the hard copy came off the tickers -- remember this was 1980/1981 and computers in newsrooms were still 8 to 10 years away.

Usually, trainees -- for that was what we were -- ascended the pecking order in newsrooms at a glacial pace. In other newsrooms in the city, trainees would be at the distant margins of any daily news operation. Not at Darryl's Express.

We were expected to literally get our hands dirty. Within weeks of joining the newspaper, we were assigned the tough night shift where the next day's newspaper was planned and cast in iron so to speak. We began making pages for the 'dak' and 'mofussil' editions of the newspaper, dispatched to Poona and other towns in Maharashtra (it all seems so anachronistic now with each of those towns having their own editions).

My colleagues and I itched to do stories. And we bustled in and out of Darryl's spartan office several times a week, pitching our story ideas. Darryl was not one for hierarchy. Unlike other editors on the floor, he liked to interact with trainees, listening to their ideas, no matter how bizarre or idiotic they were.

I was checking the ticker one December afternoon when I discovered that John Lennon had been murdered. Arun Katiyar -- then a co-trainee, now a venerable voice in journalism -- and I rushed to Darryl's office to alert him.

He gave us carte blanche to plan the coverage (I was then just a month old at the Express), a decision that went badly with a chief sub who believed that any event Western in origin was his domain. Said gent made me weep after my work on Lennon's death appeared in print, but that humiliation was quickly erased by Darryl's wah-wahs for what Arun and I had pulled off.

Some four months after we were hired, mandarins in the Express management decided that Darryl's recruits needed to be assessed, checked if they were worthy of belonging to such a hallowed institution.

Darryl was not one to hire people on the basis of their academic credentials (some of us trainees had dropped out of college without a degree, other like me had barely made it past graduation). What mattered to him was our news instincts, our journalistic zeal, our nose for a story.

Arun Shourie and Saeed Naqvi, who then ran the northern and southern sultanates in RNG's empire, would interview each one of us if we passed an editing test, this after we had been editing stories for the newspaper and making pages for weeks, providing the deputy news editor and chief subs with our inputs for the front and inside pages.

Darryl called me to his office. "Don't try to be oversmart when Arun and Saeed speak to you," he advised me, adding, "and for god's sake, don't try that Auden line on them!"

I don't recall what Dr Shourie and Mr Naqvi spoke to me about, but I came away with the impression that they don't quite like each other.

The belated interviews were an indication that RNG was displeased with 'Monty', as he once memorably referred to Darryl in a conversation with Dom Moraes. Old timers in the newsroom felt insecure with the brisk changes Darryl ushered into the newsgathering and presentation process.

Darryl decided that the appearance of the first newspaper in Bombay in 28 years was a news event and issued instructions to publish a report in the Express. The news editor and his subordinates were aghast. In the Express Towers penthouse, RNG's abode, where Jayaprakash Narayan had spent many days after the Emergency, the mood was rumoured to be apopletic.

Darryl was transferred to the Ahmedabad edition a couple of days after the report on The Daily appeared in the Express. Clearly as punishment for breaking the city's publishers's code of silence about a rival.

He preferred to resign. With Darryl's exit, the magic of our tenure at the Express evaporated. The last straw for me was censure for attending a farewell in Darryl's honour. 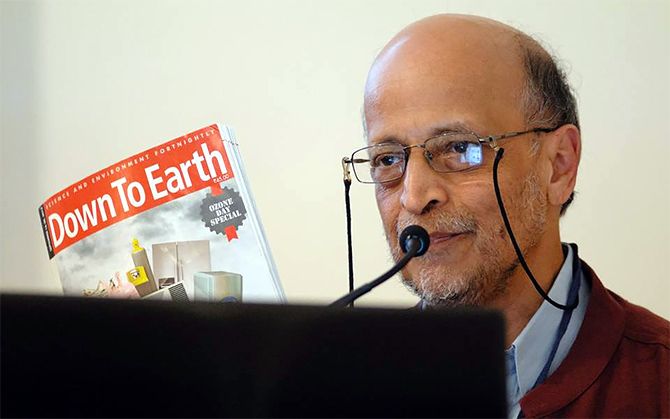 The perpetual motion machine that is the news cycle, I am sorry to say, kept me away from being in regular touch with Darryl. Whenever we met -- once on the Carter Road promenade on December 26, 2006, close to where he lived with his dear wife Zarine and son Samir ("What are you doing here?" he exclaimed) -- it was as if we were still in the Express newsroom back in '80/'81.

He was clearly the dean of environmental journalism in India, someone who had seen the dangerous signs from our contempt for our surroundings long, long, before it became almost fashionable to do so.

I wish I had known he was ill. I will never now have the opportunity to thank him for the many lessons he taught me at the onset of my career -- the value of integrity, the need for rigorous journalistic standards, the steadfast adherence to truthful journalism, giving one's colleagues every opportunity to shine.

I worked with Darryl for only about five months, but the impact he left on me will last a lifetime.

Darryl mentored more journalists than any other editor of his generation. Some of the biggest bylines owe their beginnings in our glorious (yes, it remains glorious despite the invasion of the truth snatchers) profession to this wonderful human being.

From every journalist he groomed, Thank You.