With the Rajya Sabha term of Mukhtar Abbas Naqvi ending on Thursday, the Bharatiya Janata Party will have no Muslim MP among its 395 members of Parliament. 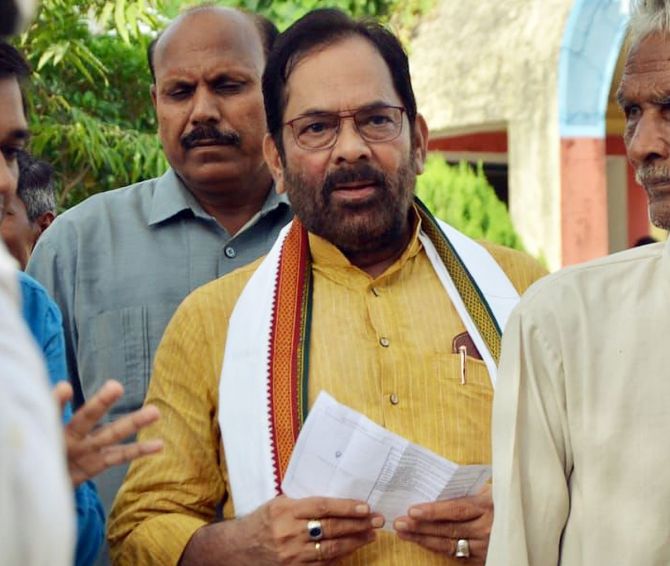 Naqvi, who resigned from the Cabinet on Wednesday, was among the three BJP Muslim MPs whose term ended during the recent round of Rajya Sabha polls to 57 seats across 15 states but none of them were re-nominated by the party.

The opposition has been accusing the BJP of not giving adequate representation to Muslims, but the saffron party has maintained that its MPs work for all communities and are not representatives of any religion.

Over the decades, Muslim BJP MPs have had a nominal presence in Parliament.

Naqvi himself has been a Rajya Sabha member for three terms, Najma Heptulla for two terms and Shahnawaz Hussain, currently a minister in the Bihar government, was elected to Lok Sabha twice. Naqvi was a Lok Sabha member for one term as well.

Sikander Bakht, a founder member of the party and one of its first three general secretaries, was a Rajya Sabha member twice.

It will be after a considerable period of time that the BJP will not have any Muslim MP.

To questions about the development, BJP minority morcha chief Jamal Siddiqui asserted that politics should not be attached with religion and that MPs are elected as representatives of the people and not of any religion.

"So even if someone from our religion or caste is not there, we should understand that our own countrymen are there. Responsibilities keep on changing in the BJP and I am confident that the party will ensure representation of all communities," he said.

The party also has Muslim lawmakers in some states, including one each in Bihar and UP.

However, there is a buzz about the party's outreach to Muslims, India's largest minority community, after Prime Minister Narendra Modi asked BJP leaders at its recent national executive meeting in Hyderabad to cultivate deprived sections in communities other than Hindus as well.