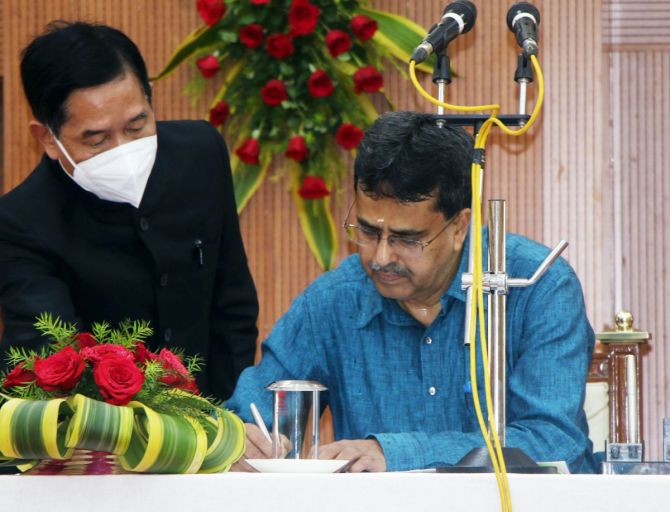 The decision was taken to ensure the betterment of the state and the party in the days to come, he told reporters shortly after Saha, the state BJP president, took oath as the new chief minister.

Nath also said that a new state cabinet would be formed in the next two to three days.

"The BJP is the biggest party in the world with over 17 crore active members. Leaders like Narendra Modi, Amit Shah and JP Nadda have replaced Deb after careful consideration," he stated.

Asked if the decision could have an adverse effect on the saffron party's prospects in Assembly polls next year, Nath, the parliamentary affairs minister in the Deb-led cabinet, said that was not a possibility.

"The BJP had changed chief ministers thrice in poll-bound Uttarakhand in a span of few months. It turned out to be a successful strategy as the party won. The BJP will emerge victorious in the 2023 assembly elections too, bagging more seats than it previously did," Nath, often referred to as 'chanakya' on the state's political landscape, said.

The senior BJP leader further explained that Deb was not upset over the decision.

"There was a chance of adverse impact had the former chief minister been upset over the party's decision. But this is not the case. Deb was the one who held consultations on Saturday with the central leadership and karyakartas over the formation of the new cabinet," Nath maintained.

Asserting that Deb secured 'grand success' in the state during his four-and-a-half-year tenure as its chief minister, meeting basic needs of people, Nath added that the former CM would soon be seen in a new role in the party.