Failing to dislodge the Bharatiya Janata Party from power in Uttar Pradesh, Samajwadi Party chief Akhilesh Yadav on Friday thanked the people of the state for increasing the party's tally by two-and-a-half times. 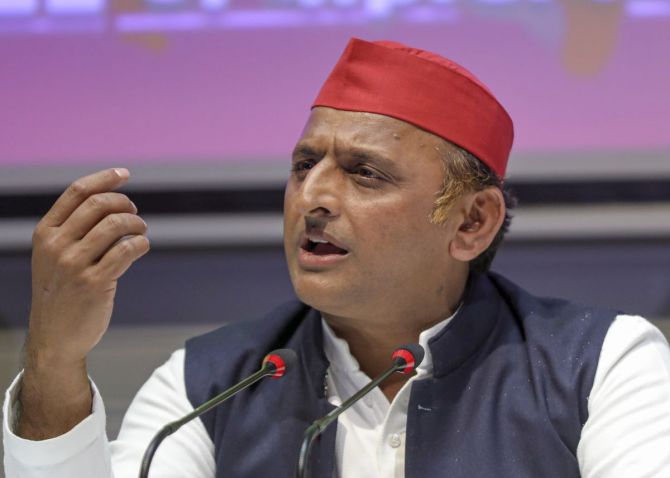 This is the SP chief's first public statement after results of the assembly elections on Thursday.

In a tweet in Hindi, Akhilesh Yadav said, "Heartiest thanks to the people of Uttar Pradesh for increasing our seats by two-and-half times. We have shown that the seats of the BJP could be decreased.

“The reduction (in the number of seats) of the BJP will continue. More than half the confusion and deceit (‘chalawa') has been cleared. The rest will be cleared in some days. The struggle will continue in public interest.”

Congratulating all the MLAs of the SP-led alliance, Yadav, in another tweet in Hindi, said, “Heartiest congratulations to all the MLAs. All the new MLAs should discharge the responsibility of serving the people, and helping them. Thanks to every single student, unemployed youth, teacher, woman, supporter of the old pension system, farmer, labourer and professional.”

During the counting of votes on Thursday, Yadav remained in the party office till evening, monitoring the poll results, in which his party-led alliance lost to the BJP-headed coalition.

He remained away from the media glare and there was no comment from him on the poll results in the politically important state till late Thursday night.

The party's national spokesperson Rajendra Chaudhary had told PTI that the SP chief will review the election outcome.

In his maiden foray in the state election, Yadav won from the Karhal assembly seat by a margin of 67,504 votes. He defeated Union minister SP Singh Baghel of the BJP.

However, his party and allies could not stop the BJP from getting re-elected for the second consecutive time in Uttar Pradesh.

As per the Election Commission's website, the BJP has won 255 seats, while its allies Apna Dal-Sonelal and NISHAD party have won 12 and six seats respectively, taking toll of the ruling coalition to 273 in the 403-member Uttar Pradesh legislative assembly.

The SP has won 111 seats, while its ally Rashtriya Lok Dal has eight seats. The SBSP, another ally of the SP, has won six seats. Together their count is 125.

The Congress has won two seats, while the BSP has won one.

An important takeaway from the polls was that the politics in the Hindi heartland would be bipolar between the BJP and the SP.

Yadav, who had formed a rainbow coalition with RLD and a string of regional parties, had waged a lonely war against a galaxy of BJP leaders led by Prime Minister Narendra Modi.

Despite aggressive campaign he failed to prevent Yogi Adityanath returning as the chief minister for the second consecutive term.