Temple priest performed a 'purification' ritual for an hour before the doors were opened again. 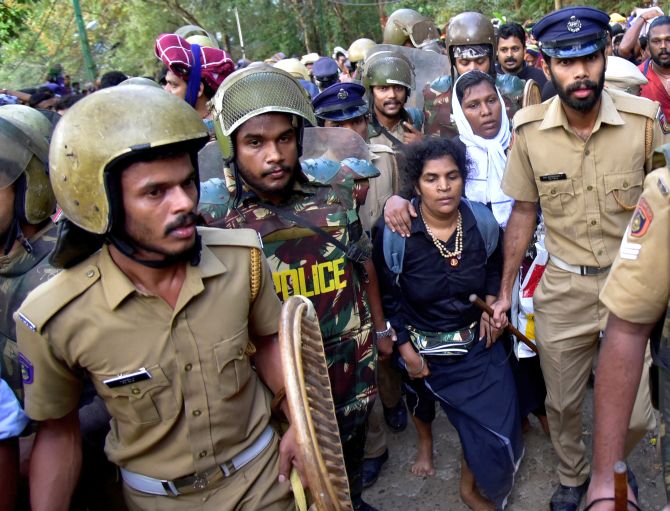 IMAGE: Bindu Ammini, 42, and Kanaka Durga, 44, are escorted by police after they attempted to enter the Sabarimala temple in Pathanamthitta district of Kerala. Photograph: Stringer/Reuters

Cloaked in black veils and shrouded in early morning darkness, two women of menstruating age group made history on Wednesday when they stepped into the Sabarimala temple of Lord Ayyappa, breaking a centuries-old tradition defying dire threats from the Hindu right.

The development sparked violent protests across Kerala by the Bharatiya Janata Party and Hindu right outfits, with the state secretariat turning into a veritable war zone for nearly five hours as the ruling Communist Party of India-Marxist and workers of the saffron party clashed, pelting each other with stones. 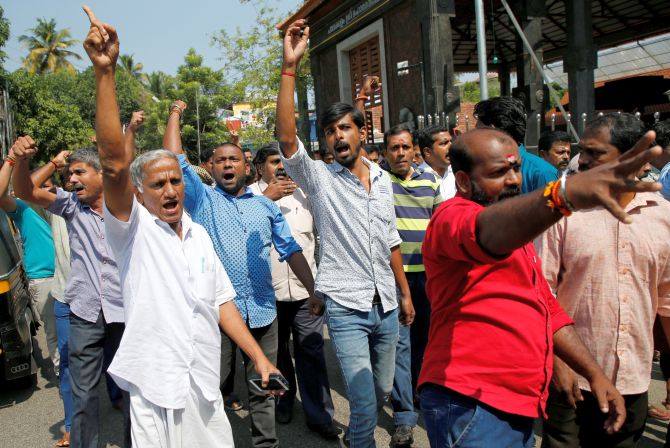 Chief Minister Pinarayi Vijayan's effigy was burnt at Malappuram and four activists of the BJP's Mahila Morcha were arrested when they forced their way close to the chief minister's office in the secretariat complex.

The duo, draped in black and their faces covered in veils, entered the temple at 3.38 am, a day after over 35 lakh women stood shoulder-to-shoulder across the national highways in Kerala, creating a 620 km-long human 'wall' from the northern end of Kasaragod to the southern tip in Thiruvananthapuram as part of the state-sponsored initiative to uphold gender equality.

As the news spread like wildfire from the hill shrine, protests erupted at several places, with Hindu right-wing activists blocking highways and forcing closure of shops and markets.

State-owned KSRTC buses were damaged at Konni and Kozhencherry in Pathanamthitta district where the temple is located besides several other places.

Devaswom Board offices attached to temples across the state were also locked up. Several policemen were injured in the violence.

People from media were also attacked by BJP members in front of the secretariat, officials said.

Sabarimala Karma Samithi, an umbrella organisation of various pro-Hindutva groups, spearheading protests against the Supreme Court's September 28 verdict, and Antarrashtriya Hindu Parishad (AHP), have called a state-wide shutdown on Thursday, when the Congress-led United Democratic Front said it would observe a 'black day'.

Fed up with the frequent shut-downs in Kerala, quite a few trade bodies and merchant organisations have decided to defy the call and keep their establishments open.

Soon after some local TV news channels aired visuals of the two women trekking to the hilltop temple, Chief Minister Piranayi Vijayan, whose Left Front government is weathering a storm of protests by hardline Ayyappa devotees over his determination to enforce the apex court verdict, announced they had indeed offered prayers at the shrine.

"Earlier, women were not able to enter the temple due to certain hurdles. They may have entered the shrine today because they would not have faced any issues. It is a fact that the women have entered Sabarimala. Police have given them security," a visibly pleased Vijayan said.

The development did not go down well with the temple authorities, with the head priest ordering devotees out of the premises and closing doors to the sanctum sanctorum.

He performed a 'purification' ritual for an hour before the doors were opened again.

The women were whisked away from the temple by police soon after 'darshan'. They were brought to Pathanamthitta from where they left for an undisclosed destination, officials said.

Police contingents have been posted at the residences of Bindu, a college lecturer and Communist Party of India-Marxist-Leninist activist from Kozhikode district's Koyilandy, and Kanakadurga, a civil supplies department employee from Angadipuram in Malappuram. 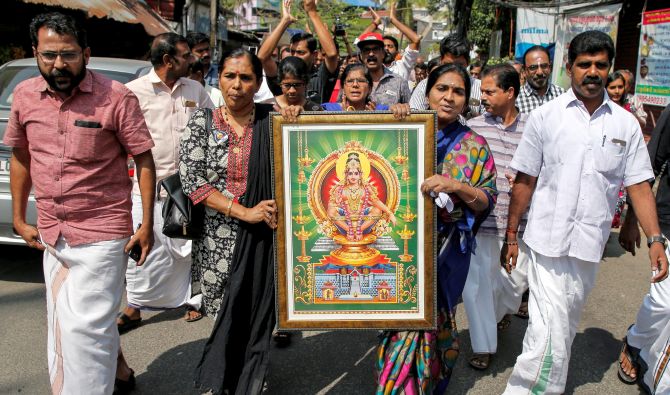 IMAGE: Protesters hold a portrait of Hindu deity “Ayappa” as they take part in a rally to protest the women's entry at the Sabarimala temple. Photograph: Sivaram V/Reuters

Scores of women had made valiant attempts to visit the shrine since the Supreme Court verdict but were forced to retreat, menaced by hardline Ayyappa devotees.

Bindu later said the duo faced no protests from Ayyappa devotees, either during the climb or while offering prayers.

"Unlike in the past, there were no 'namajapa' (frenzied devotees chanting Ayyappa mantras) protests when we climbed the hills this morning. Only devotees were there and they did not stop us or stage any protests. Police offered us protection from Pamba, the foothhills," she told a TV channel.

She said they wore the attire meant for women for Ayyappa 'darshan'.

Nobody knows exactly when girls and women of reproductive age were forbidden from offering prayers at Sabarimala, but according to a 19th-century British survey report the ban was in place even 200 years ago.

The informal restriction had got legal ratification and acceptance following a Kerala high court judgment in 1991.

Soon after the two doughty women made history, black flags were shown to Devaswom Minister Kadakampally Surendran at Guruvayur and Health minister K K Shylaja at Kannur by the BJP and its youth wing activists.

Holding Ayyappa portraits and chanting hymns to the Lord, protesters marched through the streets at several places including Kochi, Pathanamthitta, Thiruvananthapuram and Kollam.

Reacting to the entry of the two women into the temple, senior Congress leader Ramesh Chennithala said it showed the 'headstrong attitude' of the chief minister.

Women's rights activist Trupti Desai, the leader of Bhumata Brigade who led the campaign for women to be allowed to offer prayers in Maharashtra's Shani Shingnapur temple, Haji Ali Dargah, Mahalakshmi temple and Trimbakeshwar Shiva temple, hailed the courage of the two women.

"This is a big victory for our agitation. A victory of equality...This is a good beginning for women in the new year," Desai told PTI from Pune.