Sonia forms 3 Cong groups, Rahul in one, Priyanka in another, Venugopal in both

To chart the Congress' future course, its chief Sonia Gandhi on Tuesday formed three groups -- on political affairs for guidance on key issues, Task Force-2024 to implement the Udaipur 'Nav Sankalp' declaration and another to coordinate the October 2 'Bharat Jodo Yatra'. 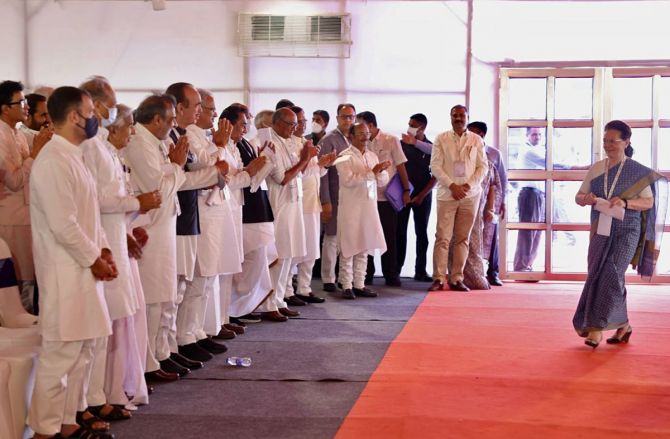 While Rahul Gandhi and two prominent members of the G23 -- Ghulam Nabi Azad and Anand Sharma -- are part of the political affairs group, senior leaders P Chidambaram and Priyanka Gandhi Vadra are members of the Task Force-2024.

G-23 is a group of dissenting Congress leaders who have demanded an organisational overhaul and have been vocal about their demand.

Sonia Gandhi has also set up a group to coordinate the 'Bharat Jodo Yatra' planned from Kanyakumari to Kashmir from Gandhi Jayanti.

"Following the Udaipur Nav Sankalp Shivir, the Congress president has constituted a Political Affairs Group that will be presided over by her, a Task-Force-2024 and a Central Planning Group for the coordination of the "Bharat Jodo Yatra", an official communication from the party said.

"Each member of the Task Force shall be assigned specific tasks related to organization, communications and media, outreach, finance and election Management.

"They shall have designated teams which will be notified subsequently," the statement said, adding the Task Force will also follow up on the implementation of the Udaipur Nav Sankalp declaration.

The task force will be the body that will bring about organisational changes as decided at the three-day brainstorming session of the Congress in Rajasthan's Udaipur.

Sonia Gandhi, in her concluding remarks at Udaipur, had mentioned setting up these groups to ensure the implementation of the decisions taken at the Chintan Shivir.

Top Congress leaders from across the country held a three-day brainstorming session to bring about structural changes in the organisation and pave the way for the young to take a central role in the grand old party.

The party announced that it will reconnect with the people and provide 50 per cent representations to youth at all levels in the Congress, besides also enforcing the one-family-one-ticket formula, with some exceptions.

All members of the task force and all heads of the Congress' frontal organisations will be ex officio members of the central group, the statement said.