Political parties in Kerala on Thursday welcomed the Supreme Court decision to refer its September 28, 2018 order allowing women of all ages into the Lord Ayyappa temple in Sabarimala to a larger bench. 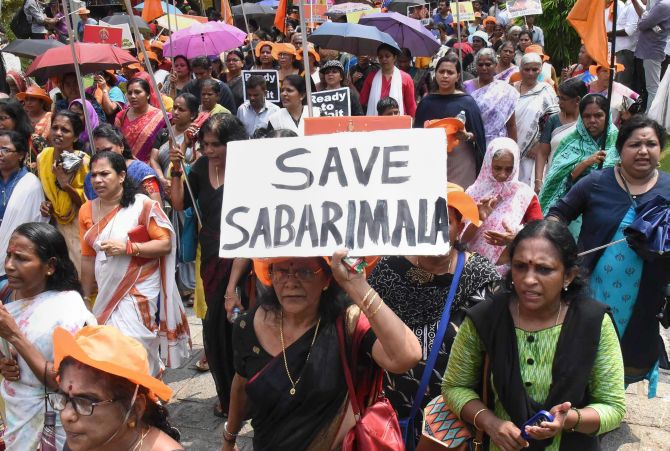 Hailing the verdict, Leader of the Opposition Ramesh Chennithala asked the Left-led state government "not to create issues" by providing security and taking women in the banned age group to offer worship at the Ayyappa temple.

"Just because there is no stay of the September 28 verdict, the LDF government must try not to create issues by providing security and allowing women to enter Sabarimala. The state government must not implement its earlier agenda of taking women in the banned age group to the hill shrine," he said.

The Supreme Court on Thursday said restrictions on women in religious places was not limited to Sabarimala alone and was prevalent in other religions as well as it referred all review pleas to a larger seven-judge bench.

Chief Justice of India Ranjan Gogoi, reading the verdict on behalf of himself and Justices A M Khanwilkar and Indu Malhotra, said the larger bench will decide all such religious issues relating to Sabarimala, entry of women in mosques and practice of female genital mutilation in the Dawoodi Bohra community.

The state government was yet to react on the decision.

He also hoped the pilgrimage season will be peaceful.

Pandalam Royal family member Sasikumar Varma, one of the petitioners, said he was happy with the apex court's decision to review the September 28 verdict allowing women of all age groups to offer prayers at the Sabarimala Ayyappa temple.

"The court understood the feelings of the devotees and transferred the petitions to be reviewed by a seven-judge bench. This means there was some error in the earlier judgment. We feel relieved and happy that the SC has decided to review its earlier verdict. This is Lord Ayyappa's blessing," he said.

Senior Bharatiya Janata Party leader Kummanam Rajasekharan said the review petitions being referred to a seven-judge bench points to the fact that there was some apparent error in the earlier
verdict.

"The government must show restraint and wait for the larger bench's verdict. In case women pilgrims in the banned age group try to offer worship, government must prevent them from doing so," Rajashekharan said.

Welcoming the verdict, Kandararu Rajeevaru, Head Priest of the Sabarimala temple, said he respects the SC decision to refer last September's verdict to a 7-judge bench.

"This gives us hope. This will strengthen the beliefs of devotees," he said.

Nobody should interfere in matters of faith, he added.

Kerala had been rocked by violent protests after the LDF government decided to implement the Supreme Court verdict of September 28 last year allowing women of all age groups to offer prayers at the shrine.