The Supreme Court on Friday restrained Karnataka Speaker K R Ramesh Kumar from taking any decision till next Tuesday on the resignation and disqualification of 10 rebel MLAs of the ruling Congress-Janata Dal (Secular) coalition. 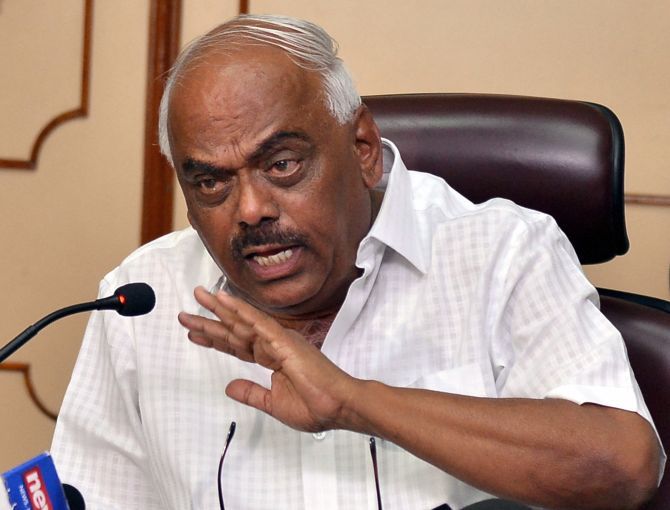 Citing 'weighty issues that have arisen', the bench headed by Chief Justice Ranjan Gogoi said the matter will be considered by it on July 16 and the status quo as of Friday should be maintained.

The bench, also comprising Justices Deepak Gupta and Aniruddha Bose, specifically mentioned in the order that the Speaker would not decide on the issue of the resignation or the disqualification of rebel MLAs to enable the court to judge larger issues raised in the matter.

The bench noted in its order that the issue of maintainability of the rebel MLAs' petition under Article 32 of the Constitution was raised by the speaker and Karnataka chief minister H D Kumaraswamy.

The case involves issues of substantial importance related to Articles 190 and 361 of the Constitution, it said, adding that it also needs to address as to whether the Speaker is obligated to decide on disqualification proceedings before accepting the resignations of MLAs.

The bench took into account the arguments by senior advocate Mukul Rohatgi, appearing for the rebel MLAs, countering the Speaker's submission that the disqualification plea of the ruling coalition in the southern state had to be decided before taking up the issue of resignation of the lawmakers.

Before passing the order, the bench asked Kumar's counsel A M Singhvi, "Is Speaker challenging the authority and power of the Supreme Court? Is it his case?

"Are you challenging our power to issue directions to the Speaker? Are you saying that we should stay our hands so far as the Speaker is concerned? You are suggesting that he is duty-bound to decide on the disqualification prior to their resignations."

Singhvi replied: "Yes, this is what my case is."

At the outset, Rohatgi alleged that the Speaker has not decided on the resignations of the lawmakers and the idea behind keeping the issue alive and pending was to bind them with the party whip and disqualify them from the membership if they violate the whip on the floor of the house.

He said the speaker questioned the MLAs' move to approach the apex court and rebuked them by saying "go to hell" in front of the media.

"He gave mixed signals in the press conference after his meeting with MLAs. He is trying to ride two horses -- on the one hand, he says he needs time to examine the resignations, on the other, he questions the Supreme Court's power to issue orders to him," Rohatgi said.

"He (speaker) says he requires time to go through the resignation letters. But they are one-liners. How long could it take him to read them? Why did he not decide on the resignations as directed by this court yesterday? He should be held for contempt. He can be allowed one or two days for this task, but until then, the MLAs cannot be disqualified," he said.

Now the Karnataka government has asked the MLAs to attend the House and vote on the budget and if they violate the whip, they shall be punished with disqualification and their resignations would become infructuous, he said, adding that 'this is why the resignations have been kept pending'.

Singhvi said: "I am constitutionally obligated to decide on the plea for disqualification of MLAs also."

"Speaker is a very senior member of the assembly and he knows the constitutional law. He can't be maligned and lampooned like this," he said, adding that the speaker was 'duty-bound and empowered' to decide the issue of disqualification of the rebel MLAs first.

"The MLAs are anyway liable to be disqualified under the anti-defection law. This has to be decided by the speaker prior to their resignations," he said, emphasising that 'the purpose of the resignations is to circumvent disqualification'.

Senior advocate Rajeev Dhavan, appearing for the chief minister, said an 'ex parte' order was passed without issuing notice to the speaker on the petition by the MLAs in which several corruption allegations against the state government have been levelled.

"Speaker has the responsibility to satisfy himself that resignations were voluntary and genuine. The Supreme Court order was passed without hearing the other side, what can the speaker do in such a situation," said Dhavan.

"The petition is overtly political. Your Lordships were drawn into the political thicket and made to pass yesterday's orders on the basis of an inaccurate representation of facts. It has been argued that resignation is not the same as disqualification? I agree," he said adding that the MLAs are claiming urgency because the state government is in minority.

"They came to the court saying that the government has failed so help us fail it further. They say the Speaker has abandoned his constitutional duty. What, as per these MLAs, is his duty. To be a post-office," Dhavan asked.

The 10 rebel MLAs moved the apex court alleging that the Speaker was not accepting their resignations.