Restrictions lifted in most areas of Kashmir Valley 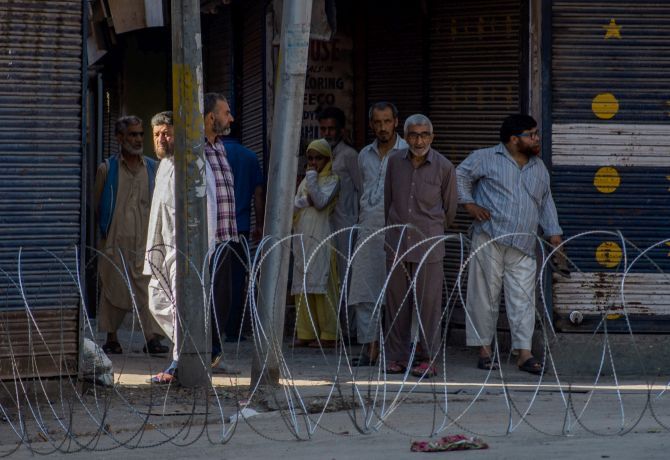 IMAGE: While barricades were removed from most areas, concertina wire barriers continued to be in place on the roads in some areas of Srinagar. Photograph: Umar Ganie for Rediff.com

Restrictions were lifted in most areas of Kashmir on Saturday, a day after strict curbs on the movement of people were imposed in the Valley in view of the Friday prayers and the proposed march of separatists to the local United Nations military observer group office.

Officials said people were allowed to move freely even as deployment of security forces continued on the ground.

While barricades were removed from most areas, concertina wire barriers continued to be in place on the roads in some areas of Srinagar and elsewhere in the Valley, they said, adding that security forces allowed the movement of people only after checking their identity cards.

The officials said the situation remained peaceful on Friday and there were no reports of any untoward incident.

The restrictions were imposed on Friday in view of the congregational prayers and the separatists' call for a march to the office of the United Nations Military Observer Group in India and Pakistan (UNMOGIP) at Sonawar.

Markets across Kashmir continued to remain shut for the 20th consecutive day as shops and other business establishments were closed, while the public transport also was off the roads, the officials said.

However, they said, some vendors have put up stalls in Batamaloo and Lal Chowk areas of the city.

The officials said mobile services and internet remained snapped since 5 August when the Centre abrogated some provisions of Article 370 of the Constitution and reorganised the state into two Union territories – Jammu and Kashmir and Ladakh.

The officials said landline telephone services were restored at some places. However, the services continued to remain snapped in the commercial hub of Lal Chowk and Press Enclave in Srinagar.