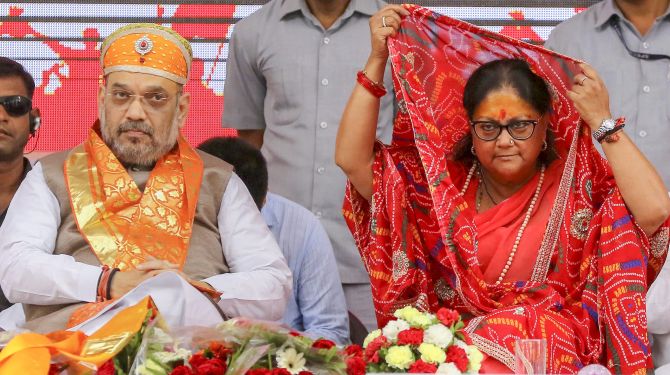 The Rajasthan Bharatiya Janata Party has suspended 11 rebel leaders, including four ministers, for six years over their decision to contest elections against party candidates, a party spokesperson said on Friday.

Four ministers, Surendra Goyal (Jaitaran), Hem Singh Bhadana (Thanagaji), Rajkumar Rinwa (Ratangarh) and Dhan Singh Rawat (Banswara), who are contesting as independent candidates, are among those who were suspended on Thursday night after they did not withdraw nomination papers.

The party termed the action 'expulsion' for six years.

Thursday was the last day for withdrawal of nomination papers for the Rajasthan assembly polls.

The other suspended leaders include sitting MLAs Anita Katara (Sagwara) and Kishnaram Nai (Sri Dungargarh) and former MLAs Radheshyam Ganganagar and Laxminarayan, among others.

"They have been expelled from the party for contesting against the party's official candidates," the BJP spokesperson said in Jaipur.

The rebels were dismissive of the party action.

"I am a five-time MLA and have a good hold on voters in my constituency. Despite that the party dropped me this time and gave the ticket to a candidate who had lost the election of ward panch. I had resigned as a party member and as minister soon after I was dropped by the party and therefore the party's action against me does not hold any value," Goyal said.

Goyal had won from the Jaitaran seat with a margin of 34,874 votes in the 2013 assembly elections.

He said he was banking on the work he did in his constituency and expressed confidence that he will win this year too.

Rawat, who is contesting from Banswara constituency, said the party's decision meant 'nothing' to him.

"Why would I care about the party's action? I do not care, I am contesting the elections and will win," he said.

The Rajasthan BJP managed to convince some of the rebel candidates, including sitting MLAs Gyan Dev Ahuja (Ramgarh) and Bhawani Singh Rajawat (Ladpura), to withdraw their nomination papers on Thursday.

Ahuja, a Hindu hardliner, and Rajwat had filed their nomination papers as independent candidates from Sanganer and Ladpura constituencies.

Apart from the BJP, the Congress is also facing a challenge from the rebels on several seats.

A total of 2,294 candidates, including 189 female candidates, are in the fray for the December 7 polls for the 200-member Rajasthan Assembly.