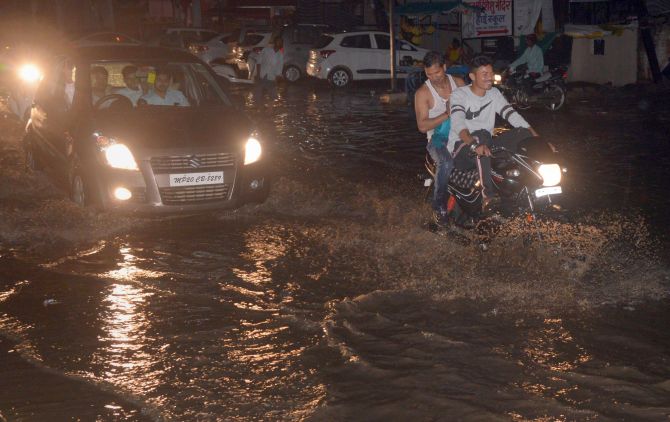 The unseasonal rains and storm also caused damage to property and crops in Gujarat and Rajasthan.

Prime Minister Narendra Modi took to Twitter in the morning to express anguish over the loss of lives in the rains in Gujarat and announce relief.

Soon afterwards Madhya Pradesh Chief Minister Kamal Nath hit out at the prime minister, accusing him of being concerned only about his home state Gujarat.

The PMO in a tweet later said, "PM @narendramodi has expressed grief at loss of lives due to unseasonal rains and storms in MP, Rajasthan, Manipur & various parts of the country".

"An ex-gratia of Rs 2 lakh each for the next of kin of those who lost their lives due to unseasonal rain & storms in MP, Rajasthan, Manipur & various parts of the country has been approved from the PM's National Relief Fund. Rs 50,000 each for the injured has also been approved," the PMO said. 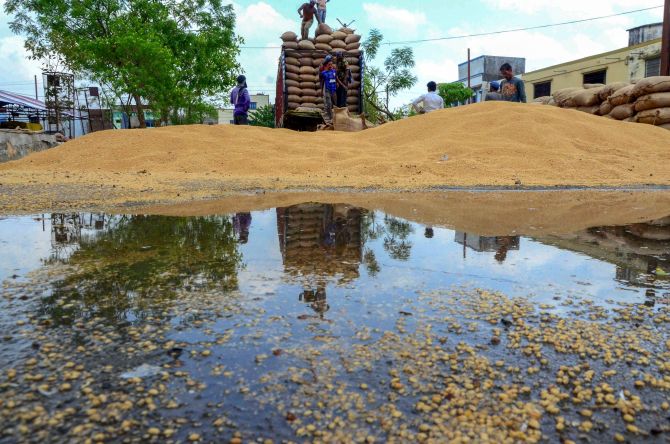 IMAGE: Wheat grain lie damaged in the open after a thunderstorm in Bhopal. Photograph: PTI Photo

Home Minister Rajnath Singh said the government is closely monitoring the situation in rain-hit areas and is ready to provide all possible help to states affected by rains and thunderstorm.

"Four deaths were reported in Jhalawar, Udaipur and Jaipur each, two each in Jalore and Bundi and one each in Baran, Rajsamand, Bhilwara, Alwar and Hanumangarh,” he said.

Compensation of Rs 4 lakh each has been announced to the families of victims.

Another official said crops have suffered damage and the assessment is being done.

Condoling the deaths, Chief Minister Ashok Gehlot said in a tweet, "Deeply pained by loss of lives due to unseasonal rains and storms in various parts of the country including Rajasthan. My thoughts and prayers are with bereaved families. I pray for the speedy recovery of those injured".

Survey of crop damage is underway. 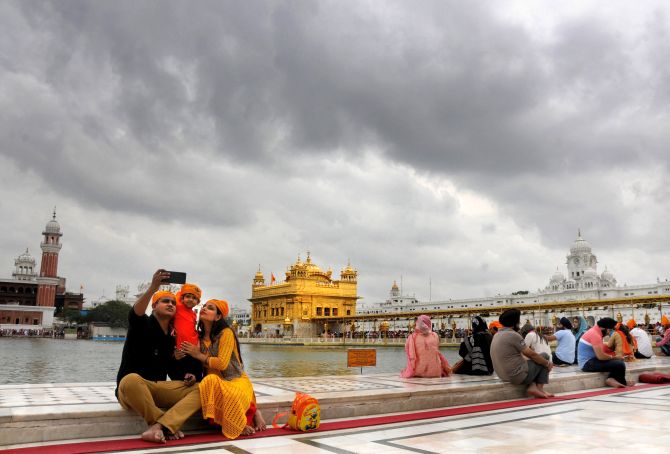 IMAGE: A family takes selfie in front of the Golden Temple as dark clouds gather, in Amritsar. Photograph: PTI Photo

Birla also blamed the state government for not issuing alert and taking measures to prevent the crop damage.

The department has predicted dust storm/thunderstorm accompanied with high velocity winds and lightning at a few places during the next 24 hours.

Rains claimed three lives each in Indore, Dhar and Shajapur, two in Ratlam and one each in Alirajpur, Rajgarh, Sehore and Chhindwara districts.

Nath expressed grief over the deaths and charged that Modi's concerns were limited to his home state Gujarat.

"Modiji, you are the PM of the country and not of Gujarat. In MP also, more than 10 persons were killed because of unseasonal rains, storm and lightning. But you have confined your feelings to Gujarat only. Though your party has no government here people live here also," Nath said in a tweet.

The BJP hit back, accusing Nath of doing politics over the loss caused by rains and storm.

BJP media head and Rajya Sabha MP Anil Baluni said in Delhi that Nath is well aware of the procedure that the state government has to first inform the Centre about the damage in such a natural tragedy to get relief but instead of doing so, he was tweeting and doing politics.

"Instead of informing the Centre, he chose to do politics over the tragedy," Baluni charged. 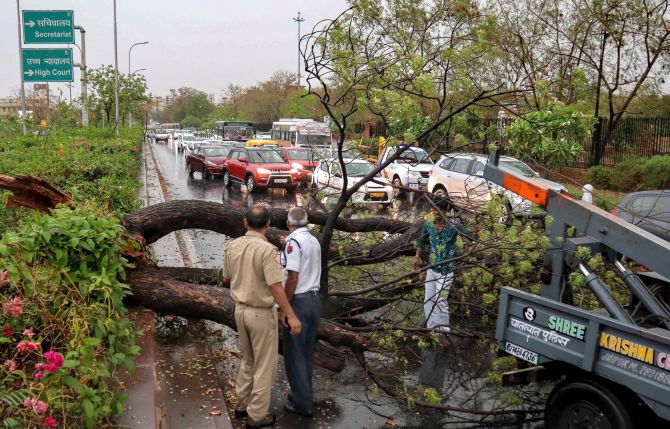 In Ahmedabad, Gujarat government's director of relief G B Manglpara, said that at least 10 people have died in the rain and dust storm reported from various areas including districts in North Gujarat and Saurashtra region.

Also, a portion of a tent erected for Prime Minister Modi's rally in Himmatnagar town of North Gujarat was also damaged in the dust storm, an official earlier said.

Gujarat Chief Minister Vijay Rupani announced an aid of Rs 2 lakh each to the kin of the deceased in the western state.

"While the PM has already announced ex-gratia of Rs 2 lakh, the Gujarat government will also give Rs 2 lakh to kin of those who lost their lives," Rupani told reporters in Dahod.

"We will also conduct a survey to assess the damage to crops and pay accordingly to affected persons," he added.

Apart from rain, the storm also resulted in hailstorm in some parts of Rajkot district of Saurashtra and Banaskantha district of north Gujarat.

In Mehsana, farm produce kept in the open in the agriculture produce market committee premises got damaged, an official said.

Besides, officials in Banaskantha said the watermelon crop, mainly grown in and around Deesa, got damaged due to hailstorm and thunderstorm.

In Maharashtra, a 71-year-old woman, a 32-year-old man and a temple priest died when lightning struck them in Nashik district during rains on Tuesday, police said.