The actor, who has been catapulted to the national spotlight for his work in helping stranded labourers, has refuted reports of his political motivations and says his work with the migrants is because of his love for them. 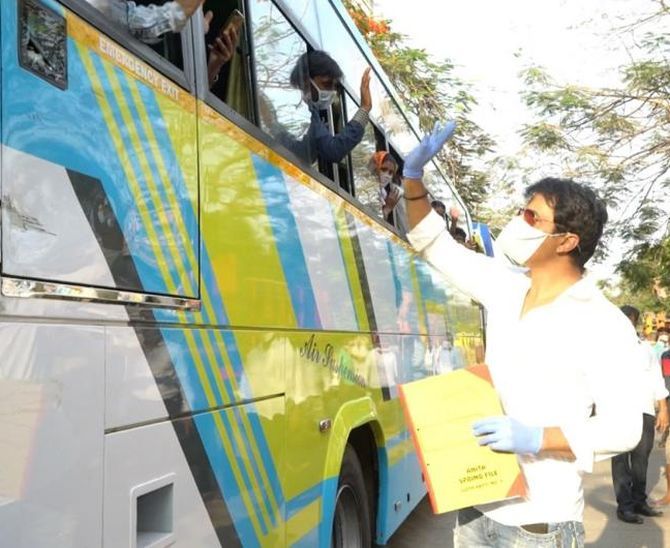 IMAGE: Actor Sonu Sood bids farewell to migrants who are returning home, thanks to his efforts. Till date, he estimates that he has helped around 20,000 workers. Photograph: Sonu Sood/Twitter

Catapulted to the national spotlight for his work in helping migrants reach their homes, actor Sonu Sood brushes off allegations that he is interested in politics and says he is doing what he is “purely out of love”.

The actor, viewed as a messiah of sorts for migrants and also the unlikely centre of debates over his motivations and possible political leanings, has been arranging for transport for thousands of migrants desperate to return to their home states.

“I have nothing to do with politics. I am doing this purely out of my love for migrants. I want to help reunite them with their families," Sood said.

He estimates that he has helped 18,000-20,000 workers to go back to their homes in states such as Odisha, Bihar, Uttar Pradesh and Jharkhand.

"I intend to work till the last migrant reaches his home. The journey has to continue in full force. No one should be rendered homeless. We want them to reach home safely,” Sood said.

SEE: A messiah for migrant labourers

On Monday night, he was stopped outside the Bandra Terminus by the Railway Protection Force from meeting labourers but the actor said he understood the situation.

"This is for the first time that I was stopped but that's ok. I was stopped by the RPF as they believed that the 2,000-2,500 migrants who were there may get too excited to see me and things may go out of control. They told me not to meet them personally. I understand the protocol and I followed it," he added.

The last days have been a ceaseless whirl for the 46-year-old, who came to Mumbai from Moga in Punjab and has made his mark in films such as “Dabangg” and “Jodhaa Akbar”.

On Tuesday, the actor arranged an AirAsia flight to send the 180 migrants back to home to Assam who were rescued when Cyclone Nisarga was approaching Mumbai last week. He previously arranged a flight for 177 workers from Odisha who were stuck in Kerala.

Sood has met Maharashtra Governor Bhagat Singh Koshyari who praised him for helping the workers as well as Chief Minister Uddhav Thackeray.

He also came under attack from Maharashtra's ruling Shiv Sena MP Sanjay Raut, who asked whether the Bharatiya Janata Party had propped him to offer help to workers from north India, stranded in Maharashtra amid the lockdown, with the intention of showing the Thackeray government in poor light. 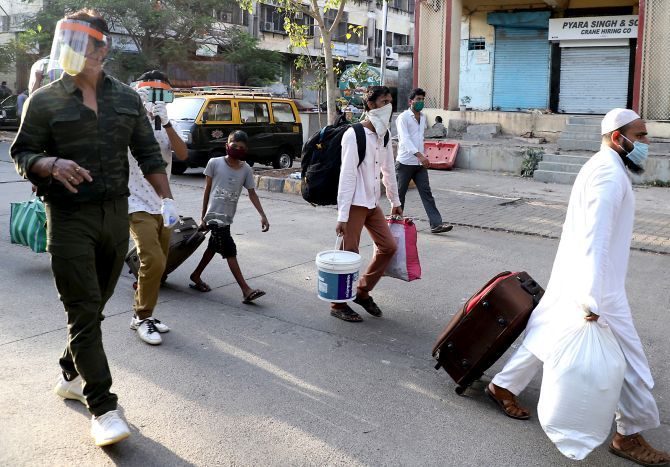 IMAGE: Sonu Sood accompanies migrant workers as he sends them to Karnataka in special buses organised by him, in Mumbai. Photograph: ANI Photo

Defence Minister Rajnath Singh backed Sood for his work for migrant labourers, stranded in the state with no work and no money in the extended lockdown to stave off COVID-19.

“I feel strongly about them because I came to Mumbai as a migrant. I boarded a train one day and landed up here. Everyone comes to a city with a dream of a better life,” Sood said.

He said he can empathise with their plight.

It was heartbreaking to see migrants travelling on foot for their homes, Sood said.

The lockdown led to a massive exodus with tens of thousands of people leaving the cities to return to their villages -- walking, cycling or hitching their way home, hundreds, maybe thousands, of kilometres away. Some died of hunger or collapsed in sheer exhaustion.

“Seeing their struggle reminds me of my own here as an actor. It was difficult initially for me. When I see them I can recollect my journey,” Sood said.

He said he first came to know about migrants leaving Mumbai while distributing food to workers on May 9 with his childhood friend Niti Goel.

The workers told him that they were going back to their homes in Karnataka.

“It is because of them that we have houses and offices, roads, etc. How can we leave them like this? The images that I saw gave me sleepless nights. And when I saw migrants walking on the highway, risking their lives, I realised it is important to come forward and do something,” Sood said.

Within two days, the first batch of buses was arranged for about 300 people after acquiring permissions from various state authorities and getting their medical tests done.

He was there to see the workers off, and has continued the practice since. IMAGE: A graphic depicting Sonu Sood as the greatest hero in the world. Photograph: Sonu Sood/Facebook

The actor has been inundated with requests from every corner of India.

He said his friends and family are helping him connect with every request that comes to him personally, through social media or through the helpline number he has launched.

“The whole wave started when people from different states started approaching me and they would cry. They were in bad shape. I have kept all my focus on that.

“I spoke to a lot of people from ground to top level, got all the permissions, be it from police or medical department... We do all the required paperwork.”

The actor said he is happy that people have faith in him and send him messages for help.

“They feel they will be able to reach their destination. That's why I have to be active and convey them that I will make this journey possible.”

Sometimes, the actor said, there are challenges in implementing the requests that come to him.

“The biggest difficulty has been getting permissions. It is not an easy job to convince everyone. I want to help people in Tamil Nadu, Andhra Pradesh, Telangana. But Telangana is not accepting people from Maharashtra. Some people respond fast and some take time.”

The philanthropic work has led to memes and cartoons on social media and even some quirky requests, one asking him for help to meet his girlfriend, and another if he can help procure alcohol.

Sood accepts it all with a smile.

“This kind of banter on Twitter will keep people entertained,” he said.

Crediting his parents Shakti and Saroj Sood for inspiring him in his humanitarian efforts, the actor said celebrity status can be put to use in speeding up the process.

“Everyone should come forward to do their bit. Every kitchen should make an extra meal for someone, be it a vegetable vendor or a watchman or anyone else. No one in the country should sleep hungry or stay homeless,” he concluded.

Komal Panchamatia
© Copyright 2020 PTI. All rights reserved. Republication or redistribution of PTI content, including by framing or similar means, is expressly prohibited without the prior written consent.