An all-woman contingent of the Border Security Force stunned one and all at the 69th Republic Day parade with their daredevilry.

In one of the most-awaited acts of the day, the women, in their debut, created some stunning formations, such as “fish riding, side riding, faulaad, peacock and Saptarishi”, that dropped jaws and drew cheers.

Now this is what we call women power! 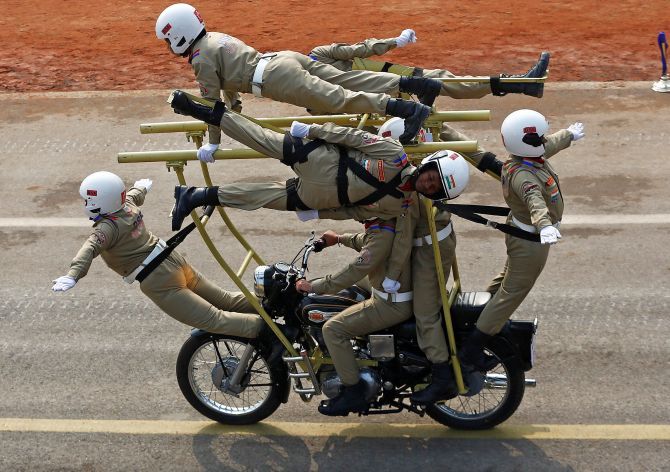 In one of the many firsts this year, a women contingent of the Border Security Force on Friday performed motorcycle stunts during the Republic Day parade, drawing one of the loudest cheers from the audience as well as dignitaries like President Ram Nath Kovind and ASEAN leaders. 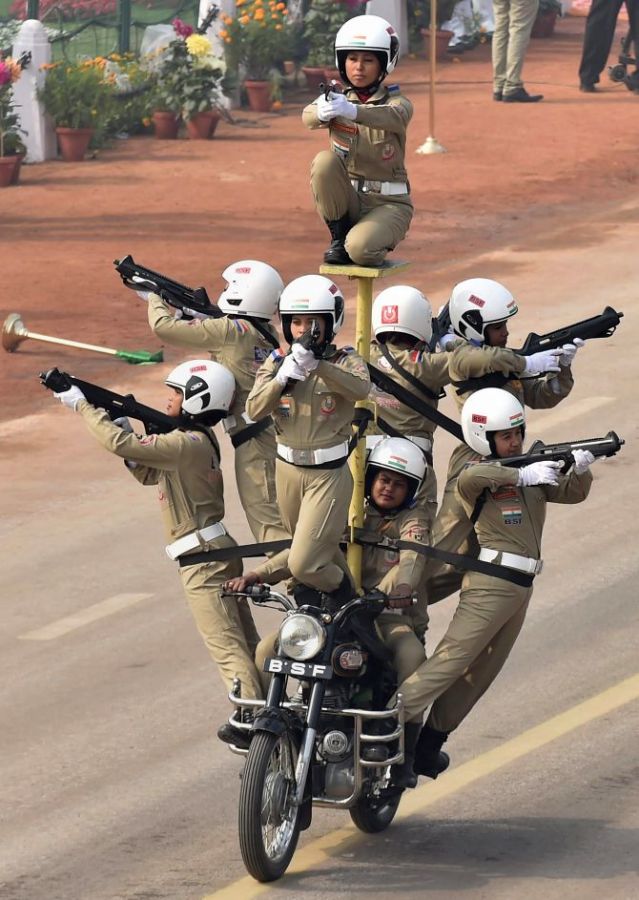 As per tradition, the BSF and the Army’s bike-borne ‘daredevils’ end the parade on alternate years. But this time, members of the BSF’s women motorcycle team ‘Seema Bhawani’ replaced their male counterparts. 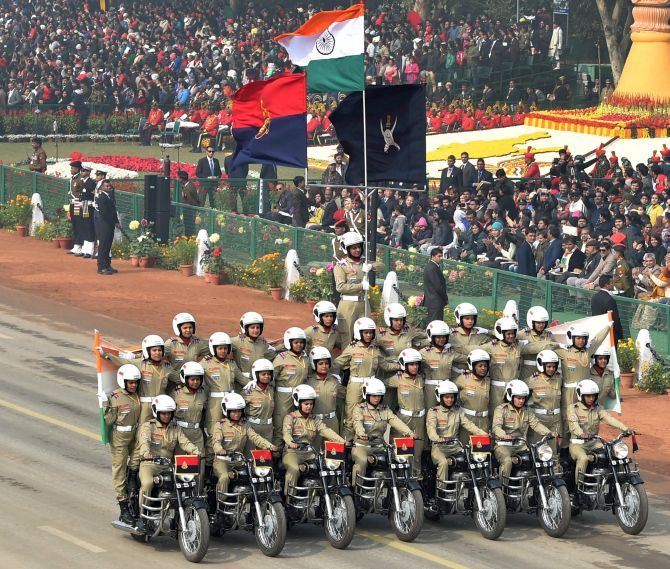 Image: BSF Director General KK Sharma came up with the idea in 2016 to form an all-woman bikers group which could replace men daredevils and the women were picked from all over the country. Photograph: Vijay Verma/PTI Photo

Over a 100 women riding as many as 26 350cc Royal Enfield Bullet motorcycles enthralled the spectators many of whom -- men, women and children -- were on their feet and  clapped throughout the display.

President Kovind, Prime Minister Narendra Modi and ASEAN leaders present on the dais and other dignitaries in the audience too applauded the women bikers. 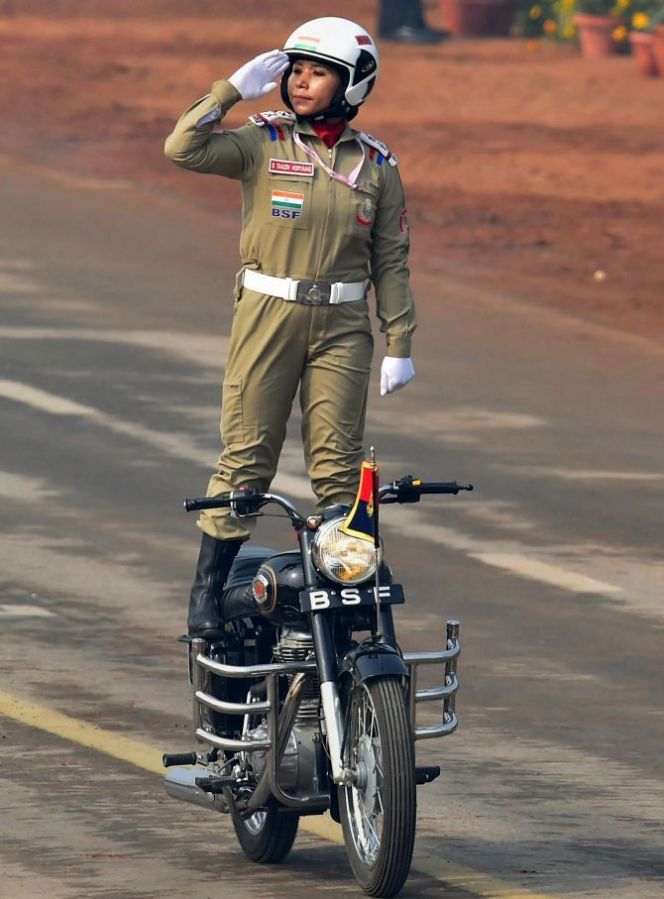 Image: Surprisingly, most of the women in the contingent couldn't ride a bike. But now they can perform any daredevil stunt, they proudly say. Photograph: Vijay Verma/PTI Phot

In 2015, women contingents of the army, navy and air force had made debut in this national parade.

The team was raised at Central School of Motor Transport, BSF Academy Tekanpur on October 20, 2016.

The members of this special women bikers squad have been specially chosen by BSF trainers and are aged between 25-30 years. They are drawn from various combat ranks of the force. 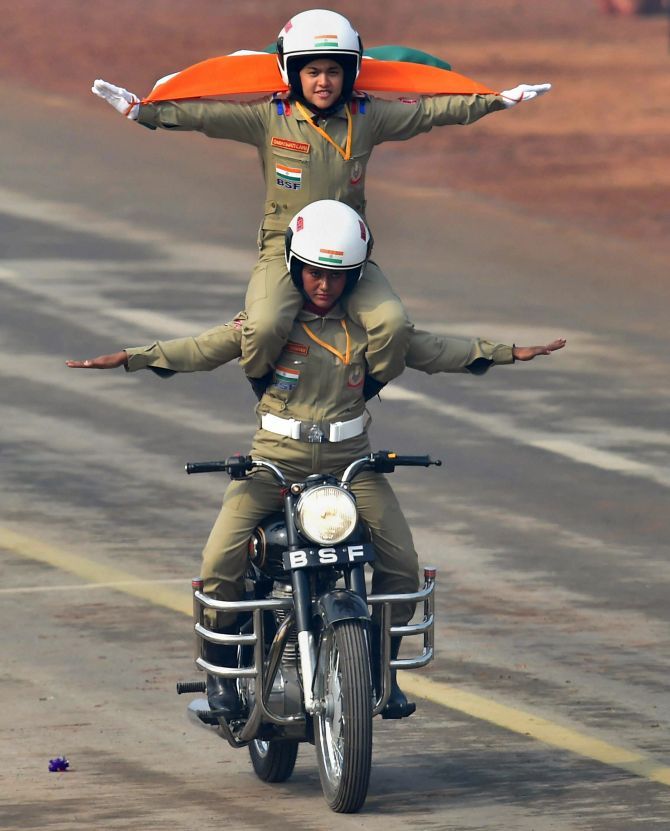 Image: We couldn't be more proud of our women!  Photograph: Vijay Verma/PTI Photo

The BSF ‘daredevil’ team had made news a few years back when the then US President Barack Obama, while officiating as the chief guest of the 2015 parade, signalled a thumbs-up to the bikers from his dais on Rajpath and had later called their stunts “impressive”. 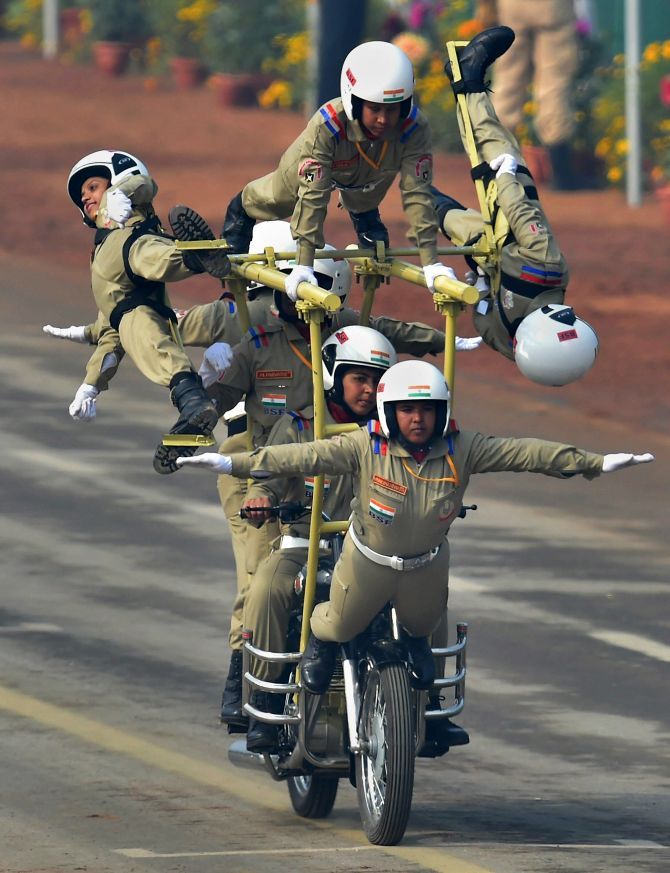 The BSF also had its iconic camel contingent along with its marching and band teams.

Many among the guests and the audience were seen taking pictures of the decorated camels as they marched on the Rajpath in their colourful finery.