Bharatiya Janata Party and Trinamool Congress supporters on Tuesday fought pitched battles on the streets of Kolkata during a massive roadshow by Amit Shah, who escaped unhurt but was forced to cut short the jamboree and had to be escorted to safety by police. 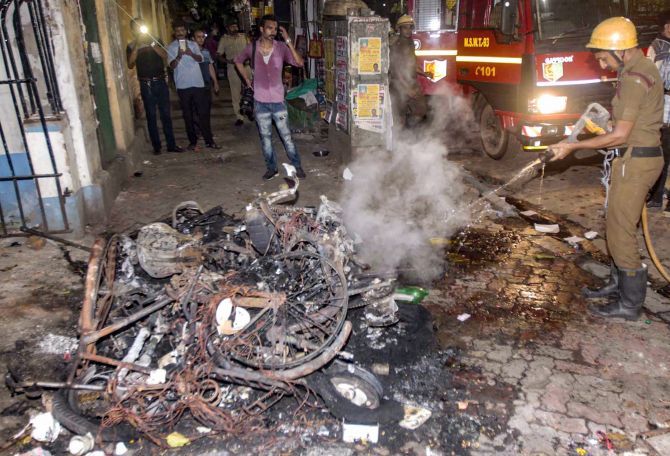 Several motorcycles parked outside were vandalised and set ablaze. Shards of broken glass littered the lobby of the college where a bust of Ishwar Chandra Vidyasagar, a noted philosopher and a key figure of Bengal Renaissance, was smashed to smithereens. Police personnel were seen trying to douse the fire with buckets filled with water. 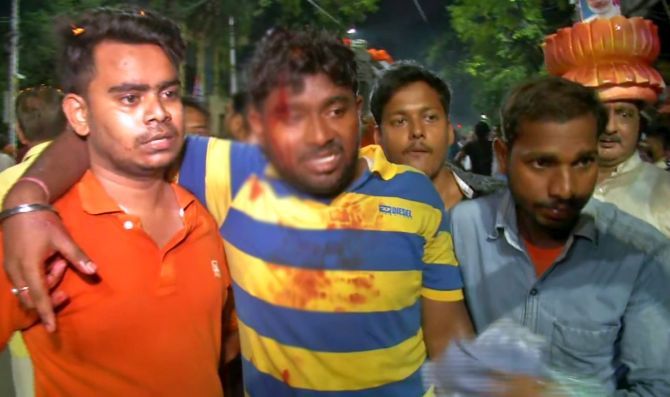 IMAGE: A wounded BJP supporter is rushed for treatment as violence erupts during the road show of BJP president Amit Shah.Photograph: ANI Photo

Contingents of Kolkata Police deployed for the roadshow swung into action and were seen chasing away the warring groups.

"There was an attempt by TMC hooligans to attack me. Mamata Banerjee (West Bengal chief minister) tried to provoke violence. But I am safe," Shah told a Hindi TV news channel.

He said he was told by police that the permission for the roadshow ended near the college and that he will be taken to the ancestral home of Swami Vivekananda on Bidhan Sarani.

"They (police) deviated from the planned route and took a way where there were traffic jams. I was not allowed to reach Swami Vivekananda's house to pay tributes and I am saddened by it," Shah claimed. 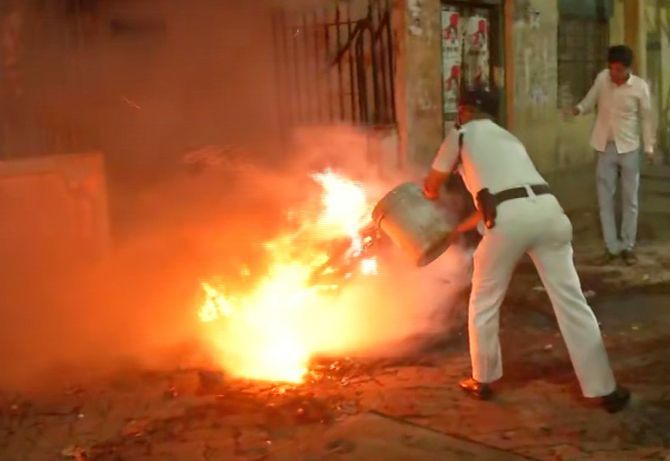 "If you lay your hands on Vidyasagar, what will I call you other than a goonda," she told a rally in Behala in the city.

"I hate your ideology, I hate your ways," she said, and announced a protest rally on Thursday against the vandalisation of the bust of Vidyasagar.

Gautam Kundu, principal of Vidyasagar college said, "The BJP supporters carrying party flags barged inside the office and started abusing us. They tore papers, ransacked the offices and union rooms and while leaving desecrated the bust of Vidyasagar. They locked the gates and set bikes and motorcycles on fire".

Condemning the BJP, he said the attack by its supporters show that the saffron party has no respect for Bengal's culture.

A police team led Deputy Commissioner Subhankar Sinha reached the spot and said an investigation has been started and culprits would be booked soon.

Earlier, there was a scuffle when a group shouted slogans against Shah outside the Calcutta University campus and showed him black flags. Police, however, swiftly brought the situation under control. 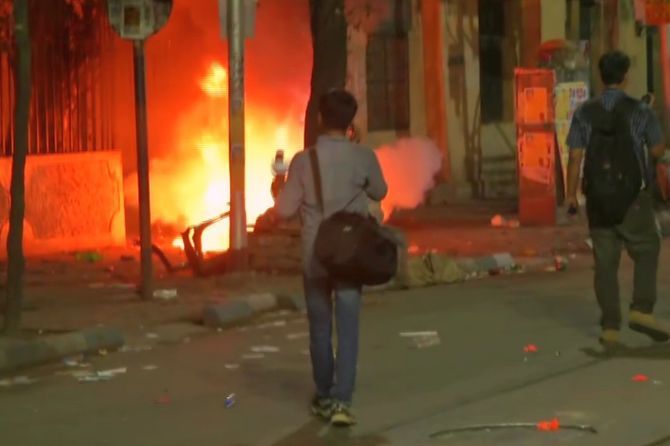 IMAGE: Parts of the city plunged into a welter of violence as his convoy was attacked with stones by alleged TMC supporters from inside the hostel of Vidyasagar College, triggering a clash. Photograph: ANI Photo

Tension has been palpable since noon, hours before Shah's roadshow began, after posters with images of Modi and him were dismantled by the police, provoking several senior leaders to stage a flash sit-in.

Vijayvargiya was seen involved in a heated argument with a police officer.

"No democracy exists in Bengal," Pradhan said, adding the people of the state were with Narendra Modi.

The police stopped Shah's convoy on Vivekananda road, just few metres away from Swami Vivekananda's ancestral house and told him to terminate the roadshow there as per the permission granted by the authorities.