K Chandrasekhar Rao's Telangana Rashtra Samiti on Tuesday steamrolled a feeble Opposition challenge to win the assembly elections by a landslide, riding pro-Telangana sentiments and the success of a raft of populist schemes launched by his government. 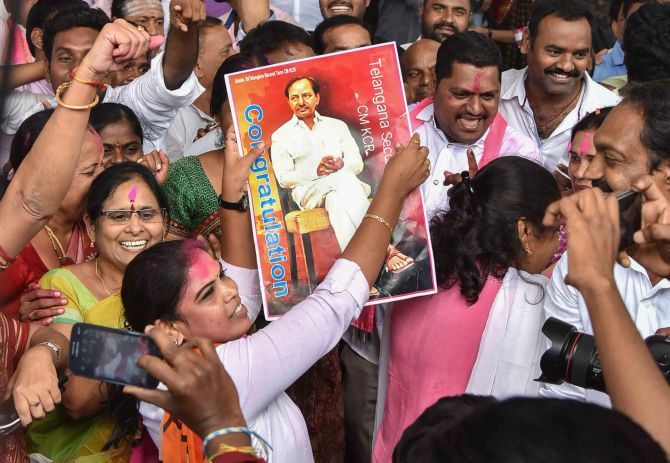 The TRS will form its second government in the youngest state in the country.

Rao, 64, who emerged as the mascot of Telangana pride when he led the massive movement that convulsed undivided Andhra Pradesh and ended with the creation of the youngest state of the country in 2014, powered his party winning 88 seats in the 119-member assembly.

Rao himself won by a margin of over 51,000 votes from his Gajwel seat, trouncing V Pratap Reddy of the Congress.

The newly elected lawmakers of the TRS are meeting in Hyderabad at 11.30 am on Wednesday to formally elect Rao as the leader of the legislature party.

A TRS leader said the date for his swearing-in will be finalised at the meeting.

The Congress had just 19 seats in its kitty, two less that what it won in the last polls, while the TDP could win only two against its tally of 15 seats in 2014.

The two other coalition partners failed to open their account.

Telangana was the only state among the five where results of assembly polls were declared on Tuesday that the Congress had cobbled together a coalition amid the talk of formation of a broad-based alliance to take on the Bharatiya Janata Party-led National Democratic Alliance in the Lok Sabha polls next year.

Buoyed by a string of electoral successes in assembly elections, the BJP ploughed a lonely furrow after the TDP walked out of the NDA a few months ago.

However, the TRS juggernaut put paid to all hopes the saffron party might have had of making inroads into Rao's citadel.

The BJP, which had won five seats in the last assembly polls in 2014 held in undivided Andhra Pradesh that it contested in alliance with the TDP, had to be content with just one seat out of the 118 where its candidates tried their luck.

Hyderabad MP Asaduddin Owaisi's AIMIM, which Rao calls a 'friendly party', has won five seats and its nominees are leading in two places. IMAGE: Rao himself won by a margin of over 51,000 votes from his Gajwel seat, trouncing V Pratap Reddy of the Congress. Photograph: PTI Photo

"Today's results...Telangana has shown the way to the whole nation. Today, Telangana stands (as) a non-Congress, non-BJP state," Rao, who has lobbied with leaders of other major regional parties, including Trinamool Congress supremo and West Bengal Chief Minister Mamata Banerjee, to pitch for a federal front against the two national parties, said.

Dedicating his party's resounding victory to the people of Telangana, Rao said an action plan for development will be prepared to meet the aspirations of people.

The emphatic victory of the TRS might well act as a springboard for the leader who harbours the ambition of playing a greater role in national politics.

Though Telangana came into existence more than four years ago, TRS supremo brought alive the issue of 'Telangana pride' by repeatedly targeting his former boss and Andhra Pradesh Chief Minister N Chandrababu Naidu, accusing him of stalling the development of Telangana and calling him an outsider.

His appeal to regional sentiments appeared to have helped the TRS keep the Congress, which made huge gains in Rajasthan, Madhya Pradesh and Chhattisgarh, under check in Telangana as it had aligned with the TDP, a party Rao accused of acting against his state's interests.

Rao's populist schemes, including waiver of farm loans totalling over Rs 17,000 crore and implementation of 'Ryuthu Bandu', a farmers investment support scheme that gave tillers Rs 8,000 per annum per acre also seemed to have endeared him to the sizeable farming community.

Despite his aggressive posturing during the Telangana movement, Rao ensured there was no persecution of those from Andhra Pradesh after its bifurcation, something that ostensibly helped him secure votes of many people from the neighbouring state.

Rao's repeated criticism of Prime Minister Narendra Modi for 'thwarting' the TRS government's efforts for raising quotas for Muslims and Scheduled Tribes in government jobs and state-run educational institutions during the campaign also apparently helped the party garner support of these sections.

Asaduddin Owaisi, who of late has emerged as one of the most prominent Muslim voices, openly backed the TRS and even organised rallies in support of its candidates. Rao's decision to dissolve the House in September, eight months before its tenure was to end, and go for an early election, is being seen as a masterstroke, as national issues might have overshadowed those of the state if simultaneous elections were held for the Lok Sabha and the state assembly.

Rao was first off the blocks when he announced the names of 105 candidates for the 119-member assembly barely a couple of hours after recommending its dissolution.

The TRS nominees hit the ground running and the gamble paid off.

Following the opposition coalition's drubbing, Chandrababu Naidu said it respects the people's verdict, but claimed the results of the assembly polls in five states showed people had become 'antagonistic' to the BJP.

"People of all states are antagonistic towards the BJP. Results of these assembly elections will enable formation of a strong alternative to the BJP in the 2019 general elections," he said in a statement, and congratulated Rao on his party's victory.

The Congress cried foul, saying it suspected 'manipulation' of the Electronic Voting Machines, and demanded that all votes be counted using the VVPAT (Voter Verified Paper Audit Trail) to ascertain the exact number of votes polled by each candidate.

CPI general secretary Suravaram Sudhakar Reddy attributed distribution of 'huge amounts of money and liquor' by the TRS for its victory.

"This election was not free and fair. Distribution of money and liquor was terrible. I do not think it is a moral victory for him (Rao), it is only a technical victory," Reddy said.

He said the opposition alliance should have finalised the seat-sharing deal earlier than they actually did as that would have given it more time for campaigning.