A grenade explosion rocked the crowded general bus stand in the heart of Jammu city on Thursday killing a teenager and injuring 32 others and within hours a man whom the police said was tasked by terror outfit Hizbul Mujahideen to carry out the attack was arrested. 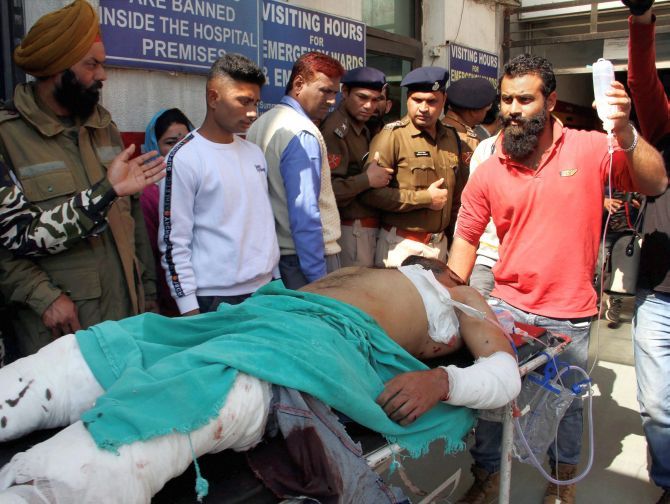 The third grenade attack by terrorists on Jammu bus stand since May last comes just three weeks after the Pulwama terror strike on February 14 that killed 40 CRPF jawans bringing India and Pakistan on brink of war.

The grenade attack was carried out inside the general bus stand area around 11.50 am resulting in the death of 17-year-old Mohammad Sharik and injuries to 32 others including 11 from the Valley, 10 from Jammu and others from outside the state, police said.

Sharik, a resident of Hardiwar in Uttarakhand, succumbed to splinter injuries in hospital, police said.

The condition of four persons, two of whom underwent surgeries, was stated to be critical. 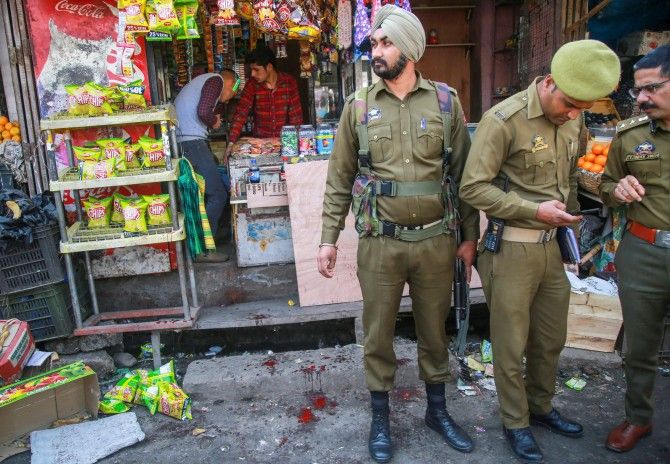 Bhat, who had reached Jammu along with the grenade only this morning after he left Kulgam on Wednesday night, was fleeing back after the attack when he was arrested by alert policemen at Nagrota in the outskirts of the city, he said.

Producing Bhat before the media persons, Sinha termed his arrest as a ‘major breakthrough’.

A parked bus of the state road transport corporation (SRTC) suffered extensive damage in the blast which caused panic among the people.

“The blast occurred on the roadside when there was a huge rush of people. I had come to drop my wife who was going to board a bus to Punjab,” said one of the injured, Kuldeep Singh from the Pragwal area of the city. 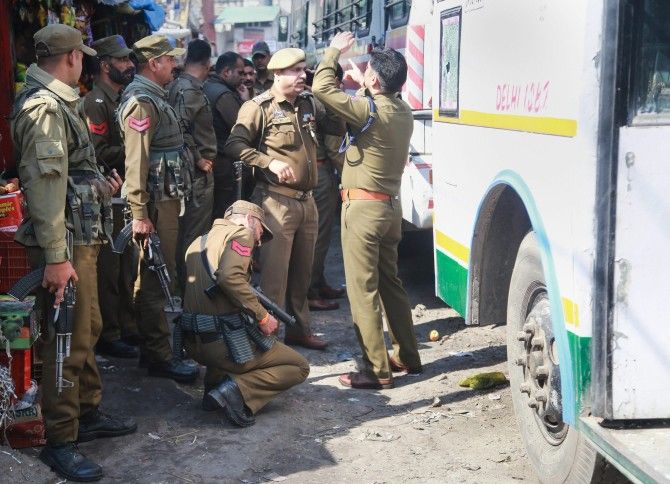 IMAGE: The scene of the blast along B C Road was sealed off by police and a massive hunt has been launched to nab the grenade thrower. Photograph: PTI Photo

Singh, who is undergoing treatment along with his wife at Government Medical College (GMC) hospital for injuries, said he felt that somebody hurled something which caused the powerful explosion.

“As soon as we came to know about the grenade blast, the police party swung into action and along with civilians evacuated all the injured and took them to Government Medical College hospital where unfortunately Sharik could not survive despite a surgery,” IGP Sinha said.

Immediately after the explosion, people ran for safety and later as the situation returned to normal they evacuated the injured to the hospital.

Police parties along with sniffer dogs and forensic experts rushed to the spot and launched a search operation.

Sinha said special teams were constituted and asked to go into evidence available and work on the leads. 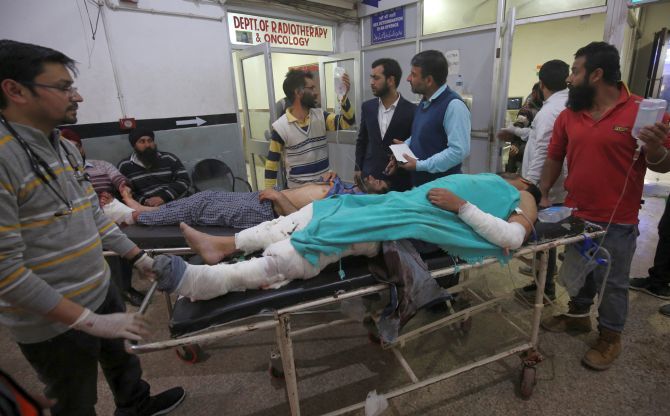 IMAGE: People injured in a grenade blast are wheeled for treatment in a hospital in Jammu. Photograph: Mukesh Gupta/Reuters

“The teams that were constituted tried assessing from the witnesses as to what they have seen, and the recordings of CCTV camera installed in the area were also seized.

“Based on the oral testimony of the eye-witnesses and the CCTV coverage, we were able to identity a suspect who was wearing Jean jackets and carrying red rucksack," he said.

Sinha said immediately all the check points of Jammu were alerted and asked to look for any person with the given description trying to move out of the city.

“One team led by Sub-divisional police officer Nagrota during checking at Ban toll plaza found this boy who was going out of Jammu and was apprehended,” he said, adding he was put to questioning and confessed the crime.

The IGP said he had started form Kulgam with the grenade only yesterday and reached Jammu this morning.

“After doing this heinous act, he tried to escape (back)," he said, adding "we are ascertaining his age.” 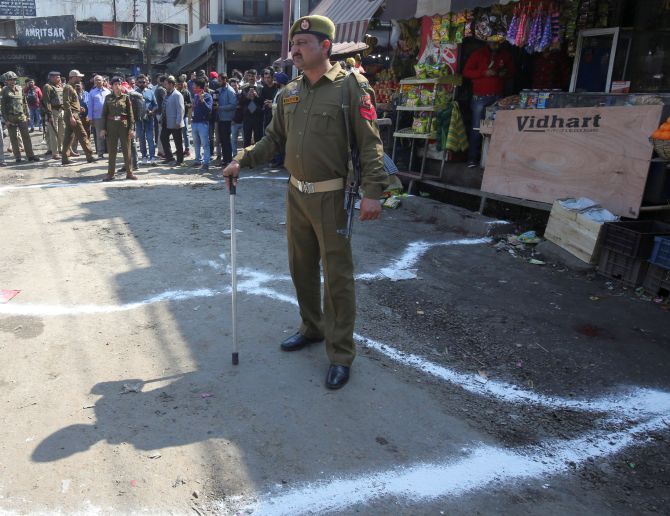 IMAGE: This is the third grenade attack by terrorists in Jammu bus stand since May last year, viewed by security agencies as an attempt to disturb communal harmony and peace in the city. Photograph: Mukesh Gupta/Reuters

“Whenever there is heightened state of alert, we strengthen checking and frisking but there is always a possibility of someone slipping through and this one seems to be a case like that," the IGP said.

The officer said there was no specific input about such an attack in the city.

“General inputs are always there and the deployments have been made. We are working on the leads all the time whenever we get inputs but there was nothing specific about this," Sinha said.

"Obviously the intention is always to disturb the communal harmony and peace," he said and requested the people to maintain calm.

"We have only carried out preliminary questioning of the accused so far. What was his specific target and motive behind the grenade attack at the bus stand would emerge once the questioning is complete," he added.

Political parties condemned the grenade attack with the BJP pledging to wipe out terrorism and the Congress expressing concern over security preparedness.