Spire of centuries-old landmark destroyed after flames burst through the roof. A major fire engulfed the medieval cathedral of Notre-Dame in Paris, one of France's most famous landmarks, on Monday.

The 850-year-old Gothic building's spire and roof have collapsed but the main structure, including the two bell towers, has been saved, officials say.

The fire was brought under control on early Tuesday, after the blaze brought its towering spire and roof crashing to the ground, wiping out centuries of priceless heritage central to French culture and history. 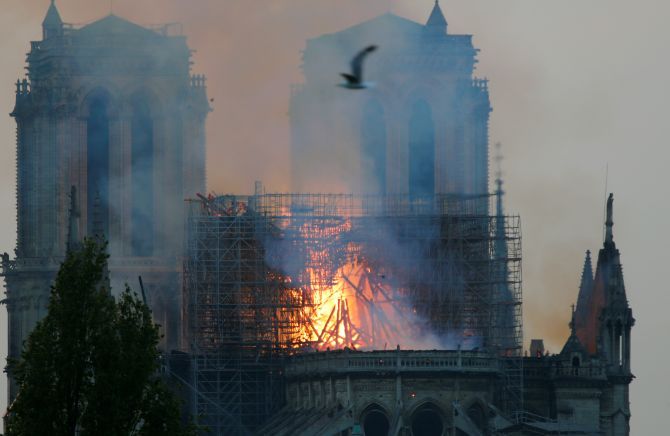 IMAGE: A spokesperson for the cathedral told Le Monde that the entire frame of the historic cathedral's roof had caught fire. Photograph: Charles Platiau/Reuters

Thousands of Parisians and tourists watched in horror from nearby streets cordoned off by the police as flames engulfed the building and officials tried to save as much as they could of the cathedral's countless treasures, built up over centuries.

According to French newspaper Le Monde, the fire broke out in the attic of the monument before spreading across the roof.

Around 400 firefighters battled into the night to control the flames, declaring in the early hours of Tuesday that it was partially extinguished but completely under control, around nine hours after it broke out.

Officials in Paris said the fire could be linked to restoration works as the peak of the church is currently undergoing a €6 million (Rs 50 crore) renovation project. A spokesperson for the cathedral said the blaze was first reported at 5.50 pm (GMT) and the building was evacuated soon after.

Police said no deaths have been reported, but authorities later confirmed that one fireman had been 'seriously injured' in the attempt to save Notre Dame.

By 9.30 pm there were claims from fire fighters around the cathedral that the priceless stained glass Rose windows in the Cathedral had been destroyed. 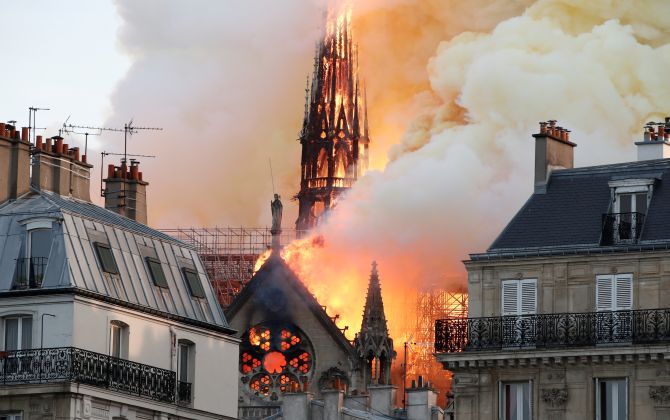 IMAGE: Teams of firefighters from across the city were called in to try and put out the fire after it spread quickly through the cathedral on Monday evening. Photograph: Charles Platiau/Reuters

Shortly after the blaze, French President Emmanuel Macron tweeted, “Our Lady of Paris in flames. Emotion of a whole nation. Thoughts go out to all Catholics and all of France. Like all our countrymen, I'm sad tonight to see this part of us burn.” 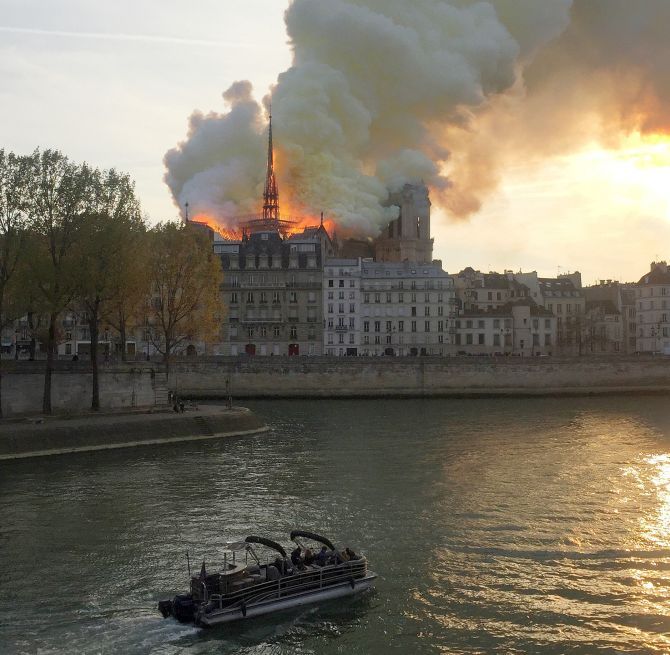 IMAGE: Much of the top of the structure fell victim to the inferno including the famous spire and part of the dome at the back of the church. Photograph: Julie Carriat/Reuters

He had earlier postponed a televised speech to the nation because of the stunning blaze and was going to the cathedral himself.

Visiting the scene, the French president said the cathedral was a building "for all French people", including those who had never been there.

"We'll rebuild Notre-Dame together", he said as he praised the "extreme courage" and "professionalism" of the firefighters. 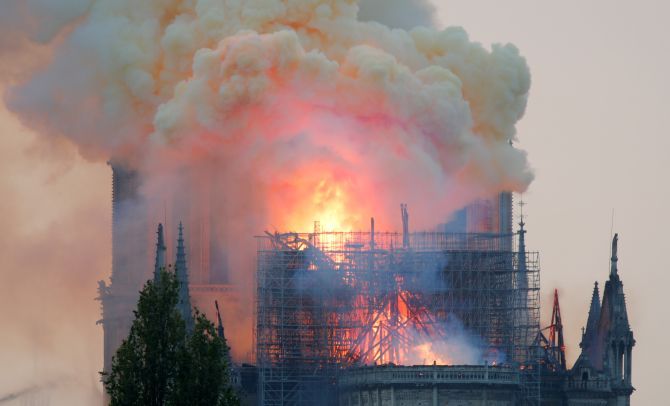 IMAGE: French President Emmanuel Macron said the whole nation was moved. 'Like all our compatriots, I am sad this evening to see this part of all of us burn,' he tweeted. Photograph: Charles Platiau/Reuters

He added: “A special mission has been launched to attempt to save all the works of art we can.”

He said the authorities were giving highest priority to securing the area and protecting tourists and residents from the risk of a collapse. 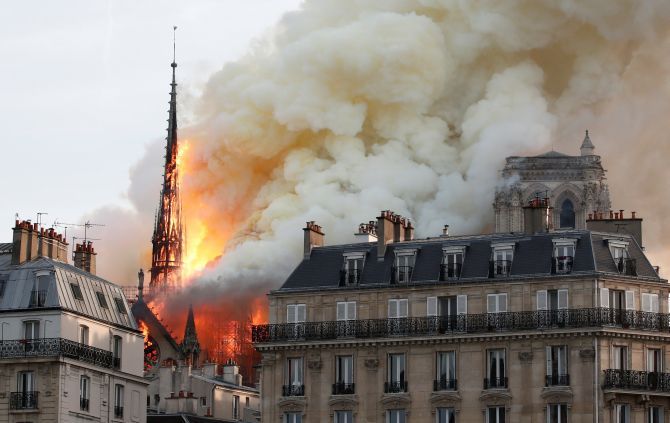 IMAGE: The stained glass window also appeared to have been destroyed by the heat of the fire. Photograph: Charles Platiau/Reuters

Paris Mayor Anne Hidalgo said in a tweet that major art pieces and sacred items from Notre Dame were saved from the fire.

"Thanks to the @PompiersParis, the police and the municipal agents," Hidalgo tweeted, "the Crown of Thorns, the Tunic of Saint Louis and several other major works are now in a safe place." 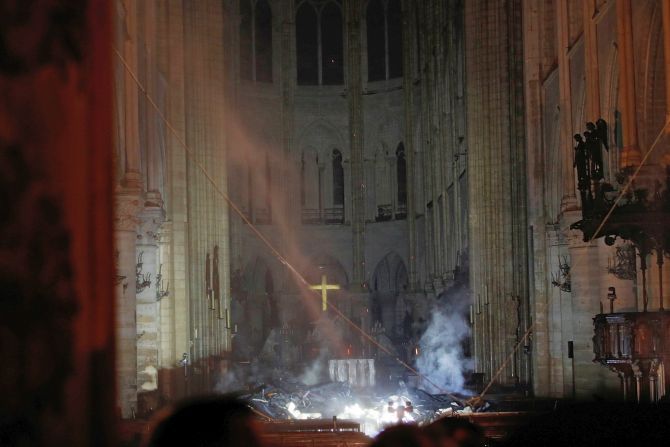 IMAGE: Smoke rises around the altar in front of the cross inside the Notre Dame Cathedral as a fire continues to burn in Paris. Photograph: Philippe Wojazer/Pool/Reuters

The cathedral is home to numerous artifacts, works of art and religious relics, each telling a story.

After the devastating fire tore through the cathedral on Monday, toppling its spire, many feared the items -- collected over the centuries -- might be lost. It was unclear how many had been saved. 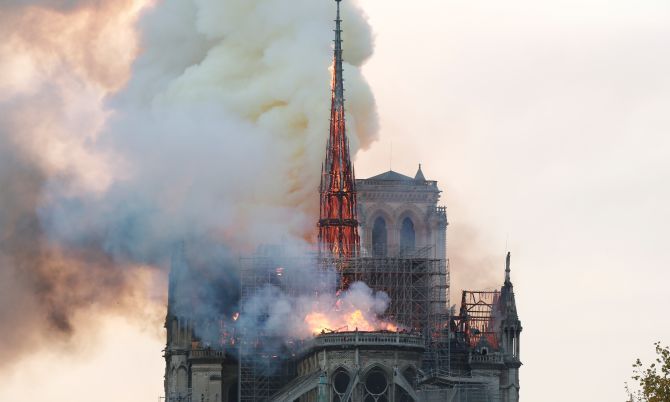 IMAGE: Nobody has been injured, junior interior minister Laurent Nunez said at the scene, adding: 'It's too early to determine the causes of the fire'. Photograph: Charles Platiau/Reuters

Late on Monday evening, French billionaire Francois-Henri Pinault pledged €100 million (Rs 784 crore) towards the rebuilding of Notre-Dame Cathedral in Paris, which was partly gutted by a devastating fire.

In a statement the CEO of the Kering group, which owns Gucci and Yves Saint Laurent fashion houses, said the money towards 'the effort necessary to completely rebuild Notre-Dame' would be paid by the Pinault family's investment firm Artemis.

The fire, which began in the early evening, sent flames and huge clouds of grey smoke billowing into the Paris sky as stunned Parisians and tourists watched on in sheer horror. 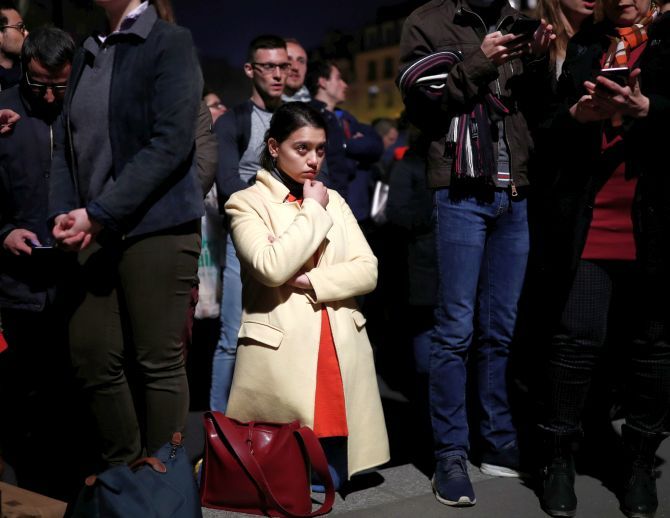 IMAGE: People react near Notre Dame Cathedral after it suffered heavy damage from a fire, in Paris. Photograph: Benoit Tessier/Reuters

Some were in tears, others offered prayers from the banks of the river Seine as the much-loved attraction at the heart of the City of Light was consumed by the inferno.

"This is really sad - the saddest thing I've ever stood and watched in my life," British tourist Sam Ogden, a 50-year-old onlooker, who had come to visit the cathedral with her family was quoted as saying.

Gasps and cries of "Oh my god" erupted around an hour after the fire first broke out when the top portion of the church's spire came crashing down.

"It looked tiny to begin with, then within an hour it all came down," Ogden added. 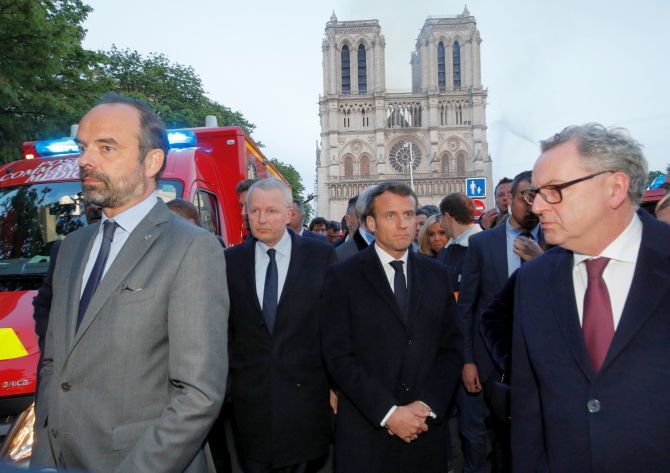 The Vatican expressed "shock and sadness," adding that it was praying for the French fire services.

Germany's Chancellor Angela Merkel has offered her support to the people of France, calling Notre-Dame a "symbol of French and European culture".

IMAGE: Parisians were horrified as their beloved cathedral was being ravaged by the fire. Photograph: Charles Platiau/Reuters

UK Prime Minister Theresa May said in a tweet: "My thoughts are with the people of France tonight and with the emergency services who are fighting the terrible blaze at Notre-Dame cathedral".

Also on Twitter, US President Donald Trump said it was "horrible to watch" the fire and suggested that "flying water tankers" could be used to extinguish the blaze.

Michelle Obama, the former US first lady, who is in Paris for her book tour, tweeted about the "majesty" of the cathedral, which is one of the city's most recognisable and visited attractions.

Michelle writes that the "history, artistry, and spirituality" of the famed cathedral "took our breath away, lifting us to a higher understanding of who we are and who we can be."

She signaled her commiseration with the people of Paris, but expressed confidence that it would soon be rebuilt, to "awe us again." IMAGE: Officials in Paris said the fire could be linked to restoration works as the peak of the church is currently undergoing a renovation project. Photograph: Charles Platiau/Reuters

The cathedral was located at the centre of the French capital in the Middle Ages and its construction was completed in the mid-12th century after some 200 years of work.

During the French Revolution in the 18th century, the cathedral was vandalised duing widespread anti-Catholic violence: its spire was dismantled, its treasures plundered and its large statues at the grand entrance doors destroyed.

It would go on to feature as a central character in a Victor Hugo novel published in 1831, "The Hunchback of Notre Dame" and shortly afterwards a restoration project lasting two decades got underway, led by architect Eugene Viollet-le-Duc.

It would survive the devastation of two world conflicts in the 20th century and famously rang its bells on August 24, 1944, the day of the Liberation of Paris from German occupation at the end of the WWII.