Britain's May loses crunch vote in another massive Brexit defeat

The British PM's EU withdrawal deal has been rejected by MPs by an overwhelming 149 votes, with just 17 days to go. 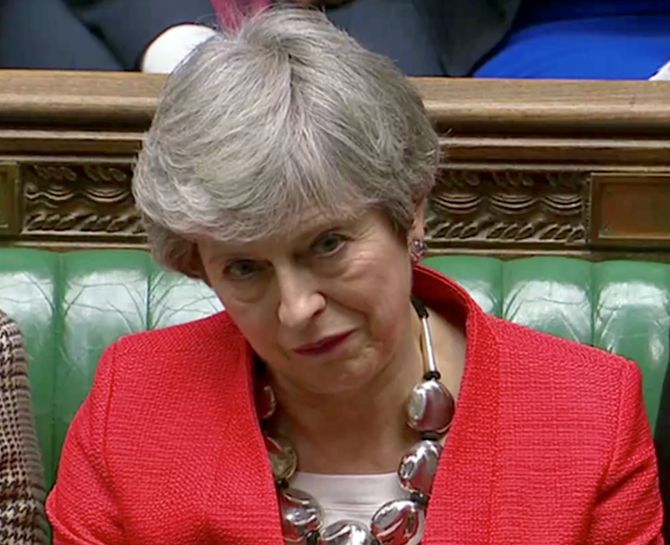 IMAGE: British Prime Minister Theresa May was unimpressed as MPs voted against the terms of Britain's so-called divorce from the EU by 391 to 242. Photograph: Reuters

British Prime Minister Theresa May on Tuesday suffered yet another massive Parliament defeat over Brexit when MPs overwhelmingly rejected her withdrawal agreement by 149 votes, leaving the March 29 deadline for the deal hanging in the balance.

MPs voted in the House of Commons against the terms of Britain's so-called divorce from the European Union by 391 to 242.

While this marked a smaller defeat than the 230-vote margin with which they rejected her deal back in January, it was a decisive rejection of government strategy even after May had claimed significant changes to the controversial Irish backstop clause had been achieved.

The British PM made a statement to the Commons soon after the bruising result was announced to confirm that Parliament will vote on a new motion on Wednesday to decide if the UK should leave the EU within the March 29 deadline without any deal in place.

In an unusual move, she revealed that all Conservative Party MPs will be given a free vote on the issue instead of being made to vote in a particular way by the government.

She said: "This is an issue of grave importance for the future of our country. Just like the referendum, there are strongly held and equally legitimate views on both sides."

"For that reason, I can confirm that this will be a free vote on this side of the House," she said.

There is unlikely to be a majority in favour of a no-deal chaotic Brexit, which would then give way to a third parliamentary motion on Thursday to determine if the Brexit deadline of March 29 needs to be extended, which would then have to be ratified by the EU.

May, visibly tired and struggling to speak as a result of a sore throat, admitted that Tuesday's vote confirms that there is no support for "this deal" and how the Brexit process moves forward remains all the more uncertain.

Opposition Labour Party leader Jeremy Corbyn called for a general election to allow the British public to decide who should lead them into the next phase of Brexit.

The EU's Chief Brexit negotiator, Michel Barnier, said in a Twitter statement: "The EU has done everything it can to help get the Withdrawal Agreement over the line. The impasse can only be solved in the UK. Our 'no-deal' preparations are now more important than ever before." Earlier on Tuesday, British PM May had made a final push for the UK Parliament to back her Brexit withdrawal agreement in the vote after she claimed to have secured "legally binding" changes to the draft rejected by the Home of Commons earlier this year.

She had called on the Commons to get behind her enhanced agreement setting out the UK's exit strategy from the EU or risk going against the will of the majority that voted for Brexit in the June 2016 referendum.

"This is the moment and this is the time. Back this motion and get the deal done... We cannot serve our country by overturning a democratic decision of the British people," she said, hours after she had claimed a breakthrough in negotiations with the EU to secure changes to the controversial Irish backstop to make it more acceptable to all sides of Parliament.

Corbyn countered that it was the same "bad deal" MPs had rejected in January and that his party would be voting against it again because it risks people's living standards and jobs.

The clash came soon after UK Attorney General Geoffrey Cox confirmed that the legal risk from the controversial Irish backstop "remains unchanged", leading to hard-Brexiteers from within May's own Conservative Party refusing to back the so-called "improved" divorce arrangement.

In his official advice as the country's chief legal adviser, Cox said the extra assurances won by May do "reduce the risk that the United Kingdom could be indefinitely and involuntarily detained" in the backstop if talks on the two sides' future relationship broke down due to "bad faith" by the EU.

However, he reiterated that the "legal risk remains unchanged" that if no such agreement can be reached due to "intractable differences", the UK would have "no internationally lawful means" of leaving the backstop without EU agreement.

The Brexit-backing European Research Group within the Tory Party declared soon after that it will not be voting for the withdrawal agreement in the Commons later, in a major blow to May's leadership.

In a statement, the ERG said: "In the light of our own legal analysis and others we do not recommend accepting the government's motion today."

The Democratic Unionist Party, which provides May's government its majority, also declared they would vote against the deal as the changes did not alleviate their concerns over the backstop.

The Irish backstop, an insurance policy designed to maintain an open border on the island of Ireland between UK territory Northern Ireland and EU member-state -- the Republic of Ireland -- has been the biggest sticking point for many MPs in the UK who voted against the withdrawal agreement tabled by Theresa May in January, by a massive margin of 230 votes.

The historic bruising for May had led her to seek changes to the agreement in order to table a second "meaningful vote" before Parliament that she hoped would stand a better chance of being voted through.

The March-end deadline had kicked in when the UK triggered Article 50 of the Lisbon Treaty following a referendum in favour of Brexit by nearly 52 per cent to 48 per cent in June 2016.