The Congress on Monday reacted sharply to the suspension of eight Opposition Rajya Sabha MPs, including three of its own, with Rahul Gandhi saying the "muting of democratic India continues" by initially silencing and later suspending the parliamentarians. 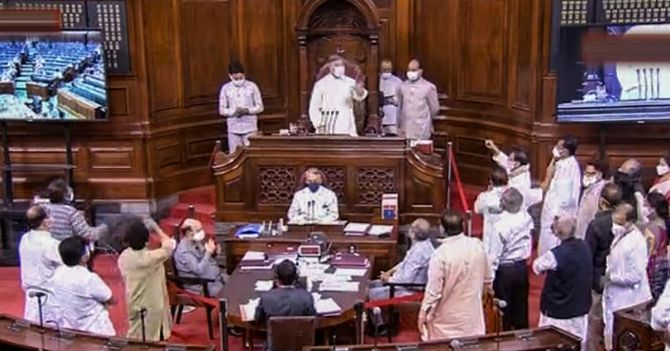 IMAGE: Opposition leaders stage a protest in the Rajya Sabha over suspension of 8 MPs for causing ruckus in the upper house on Sunday. Photograph: PTI Photo

The suspension of the eight members comes a day after the Upper House witnessed unprecedented unruly scenes by protesting opposition members during the passage of two farm bills.

"Muting Of Democratic India' continues: by initially silencing and later, suspending MPs in the Parliament & turning a blind eye to farmers' concerns on the black agriculture laws," Gandhi said in a tweet.

Reacting to the development, Congress chief spokesperson Randeep Surjewala asked whether or not there is any parliamentary system in the country.

"Is it a sin to raise the voice of the farmer in Parliament? Have dictators held Parliament hostage?" Surjewala said in a tweet.

"Do you not listen to the voice of truth under the influence of power? How many voices will you suppress Modi ji...Of the farmers, of workers, of small shopkeeper, of Parliament," he tweeted with the hashtag 'Kisaan Virodhi (anti-farmer) Modi'.

Amid opposition, the motion was adopted by voice vote and Chairman M Venkaiah Naidu asked them to leave the House but they remained present and protested the ruling.

The chairman also rejected a notice for a no confidence motion against Deputy Chairman Harivansh on the grounds that proper procedure was not followed.

Naidu condemned the unruly behaviour and "threats" to Harivansh during the passage of the farm bills.

The Farmer's Produce Trade and Commerce (Promotion and Facilitation) Bill, 2020, and the Farmers (Empowerment and Protection) Agreement of Price Assurance and Farm Services Bill, 2020 were passed by the Rajya Sabha on Sunday with a voice vote, amid unprecedented unruly scenes by protesting opposition members demanding that the proposed legislations be referred to a House panel for greater scrutiny.

The two bills have already been passed by the Lok Sabha and will now go to the president for his assent before they are notified as laws.