The Centre on Wednesday directed the National Investigation Agency (NIA) to take over the probe into the 'brutal' murder of a tailor in Udaipur where curfew remained clamped in seven police station areas while mobile Internet services were suspended across all 33 districts of Rajasthan following stray incidents of violence. 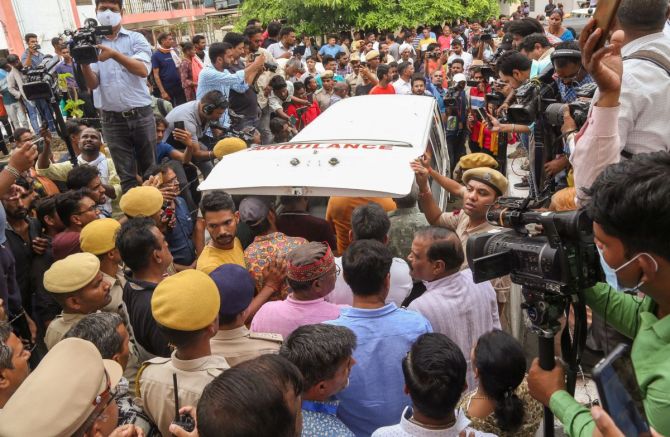 A day after the horrific murder of Kanhaiya Lal, the tailor, by two men who had posted videos online that said they were avenging an insult to Islam, Chief Minister Ashok Gehlot said his government has taken a serious view of the matter, asserting such incidents cannot take place without involvement of radical elements at national and international levels.

The body of Lal was handed over to family members after postmortem on Wednesday.

The funeral procession began amid tight security from his house in sector 14 in Udaipur with hundreds of locals joining.

Leader of Opposition Gulab Chand Kataria also visited the house of the tailor.

Treating the murder as a terror incident, the Centre directed the NIA to extensively probe the 'brutal' murder, especially whether any organisation and international links were behind the sensational killing.

A spokesperson of the Ministry of Home Affairs said on Twitter that the 'MHA has directed the National Investigation Agency (NIA) to take over the investigation of the brutal murder of Shri Kanhaiya Lal Teli committed at Udaipur, Rajasthan yesterday'.

'The involvement of any organisation and international links will be thoroughly investigated,' it said. 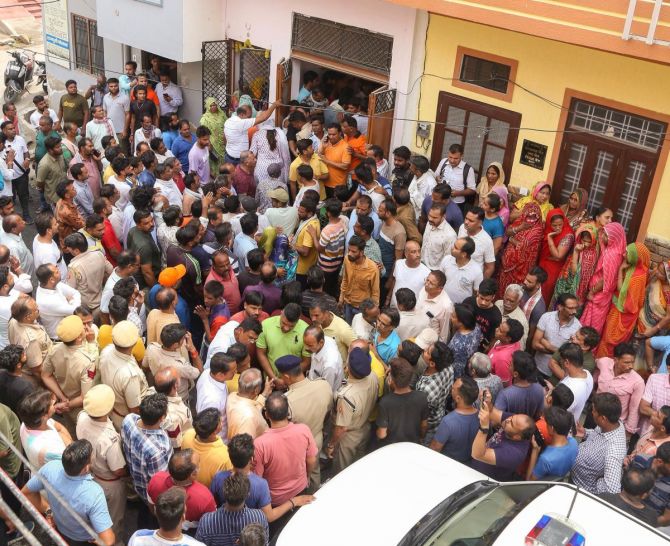 IMAGE: Relatives and locals gather outside the residence of tailor Kanhaiya Lal during his funeral. Photograph: PTI Photo

The Home ministry had rushed a probe team on Tuesday night after a preliminary probe suggested that the two accused, arrested by the Rajasthan Police, were influenced by the ISIS, a banned terror group.

The Rajasthan Police had announced a special investigation team (SIT) soon after the arrest of the two men, identified as Riaz Akhtari and Ghouse Mohammad, in connection with the incident.

In a video clip, Akhtari declared that they had 'beheaded' the man and went on to threaten Prime Minister Narendra Modi.

Indirectly, the assailants also referred to Nupur Sharma, the BJP leader suspended from the party over a remark against Prophet Muhammad.

Lal was recently arrested by the local police over a post on social media.

On June 15, while he was on bail, he told police that he was receiving threat calls.

The local SHO had summoned both sides to the police station and settled the matter, an official said. After the murder, police suspended an assistant sub inspector for negligence at that time.

The assailants has entered Lal's shop in Dhan Mandi posing as customers. As the tailor took measurements Akhtari attacked him with a cleaver, nearly severing his neck.

The other man shot the brutal murder with his mobile phone.

The men fled from the scene and later uploaded this clip on social media.

In another video, the alleged assailant said they 'beheaded' the tailor and threatened the prime minister for lighting 'this fire'.

Yet another provocative video was recorded on June 17, in which Akhtari said he will post it the day he carries out the murder.

He asked other members of the community to continue with similar attacks.

As the videos circulated on social media, tension escalated. Shopkeepers in local markets had downed shutters and a mob pelted stones and set two motorcycles on fire on Tuesday.

For several hours, shopkeepers stopped police from taking away the body, saying they will allow the removal of the corpse only after the murderers are arrested and compensation -- Rs 50 lakh and a government job -- given to the victim's family.

Later, they agreed to assurances given by the authorities.

Curfew remained clamped in seven police station areas of the city and heavy deployment of police has been made. 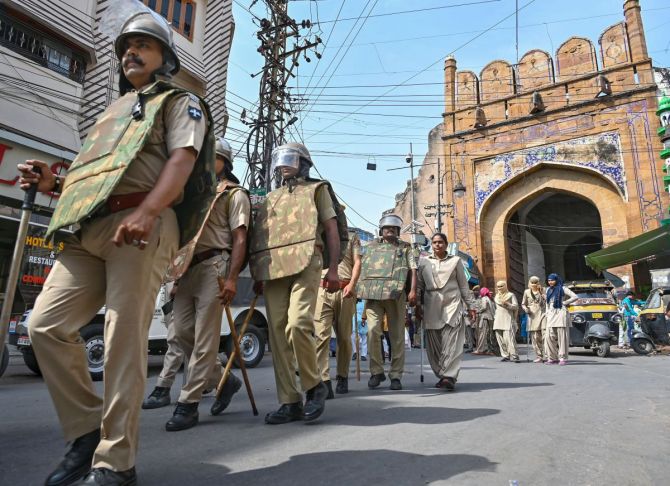 IMAGE: Police personnel patrol as security has been beefed up in Ajmer. Photograph: PTI Photo

The attack was condemned by West Bengal Chief Minister Mamata Banerjee, who said violence and extremism are unacceptable.

'Violence and extremism are unacceptable, no matter what! I strongly condemn what happened in Udaipur. As law takes its own course of action, I urge everyone to maintain peace,' Banerjee tweeted.

The Bengal Imams Association also condemned the incident, and said 'no true Muslim' will support such heinous act.

Demanding exemplary punishment for the assailants, Bengal Imams Association Chairman Md Yahia said in a statement that a criminal, a murderer should only be known by his crime and either his name or purported religious identity cannot belittle the severity of the act.

The representative body of clerics also felt that for the crime of one two individuals an entire community representing one particular religion or tribe should not be held responsible.

Islam doesn't permit taking away the life of a fellow human being, it is a sin, Yahia added.