Ten people, including the gunman were killed in in Dayton's Oregon district, while another 20 were shot dead at a crowded Walmart store in the southern border town of El Paso in Texas. 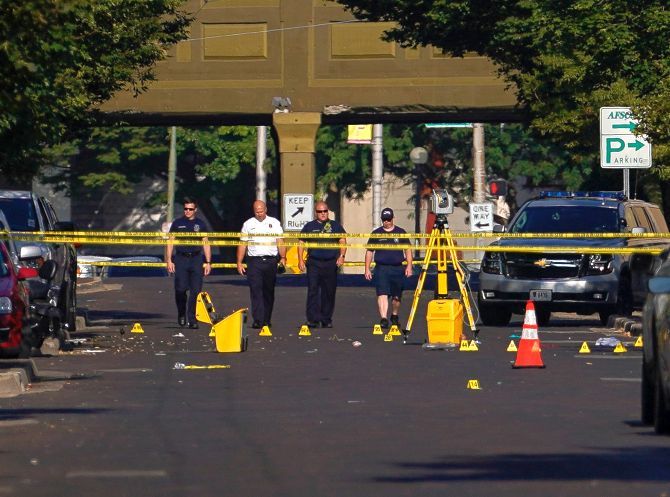 Two separate mass shootings within 24 hours left 30 people dead and several others injured in the American states of Texas and Ohio, including one thought to be a hate crime, the latest in a string of such incidents in America that have shocked the nation.

The first shooting took place in the southern border town of El Paso in Texas, where a 21-year-old gunman opened fire at a crowded Walmart store, killing 20 people and wounding 26 others on Saturday.

"The shooter is deceased. There are 9 others also deceased. At least 16 others went to area hospitals with injuries," Dayton police said. 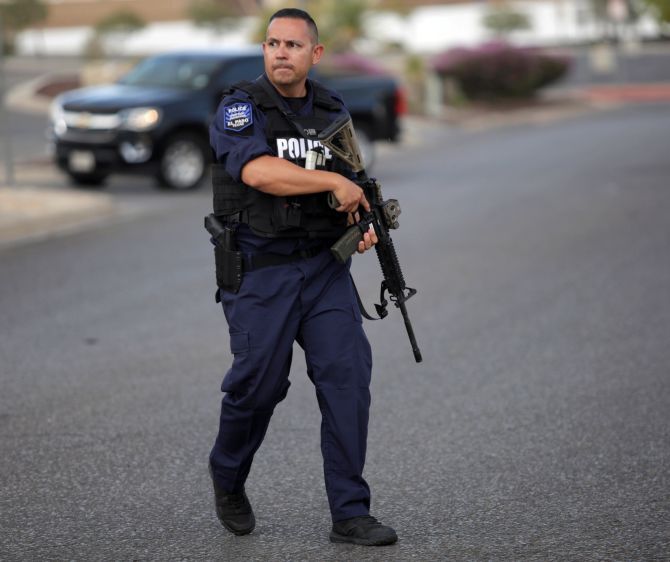 IMAGE: A police officer is seen after a mass shooting at a Walmart in El Paso, Texas. Photograph: Jose Luis Gonzalez/Reuters

The first shooting that tore through a Walmart jammed with back-to-school shoppers in El Paso on Saturday marked another bleak milestone in a nation pocked by gun violence: the 250th mass shooting of 2019.

And the rampage notched an even darker statistic: It occurred on the 215th day of the year, meaning there have been more mass shootings than days so far this year.

"The ages and genders of all these people injured and killed are numerous in the age groups," El Paso Police Chief Greg Allen said. "The situation, needless to say, is a horrific one."

For several minutes on Saturday morning, the packed Walmart store, where shoppers were busy buying back to school stuff for their kids, filled with gun smoke and the echo of gunfire. Footage shot on mobiles appeared to show multiple bodies lying on the ground in the store's parking lot.

Twenty people were killed and 26 others injured in the shooting in El Paso, said Texas Governor Greg Abbott.

"On a day that would have been a normal day for someone to leisurely go shopping, turned into one of the most deadly days in the history of Texas." 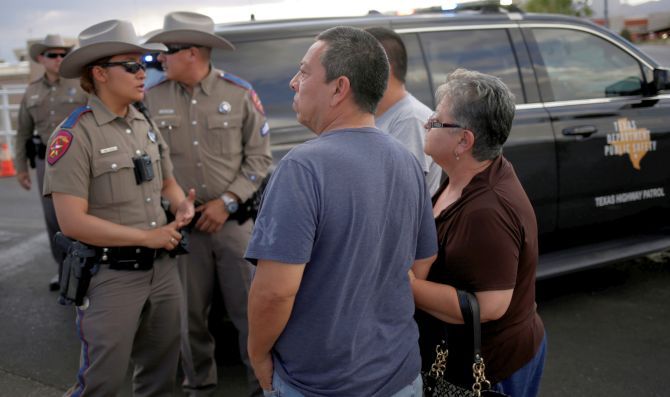 IMAGE: A couple look on after a mass shooting at a Walmart in El Paso, Texas. Photograph: Jose Luis Gonzalez/Reuters

US President Donald Trump condemned the attacks as an "act of cowardice" and said there could be no justification for the killing of innocent people.

"The FBI, local and state law enforcement are working together in El Paso and in Dayton, Ohio. Information is rapidly being accumulated in Dayton. Much has already be learned in El Paso. Law enforcement was very rapid in both instances. Updates will be given throughout the day!" he tweeted.

Marcelo Ebrard, the secretary of foreign affairs of Mexico, said six Mexican nationals were among the El Paso injured.

Victor Guerrero, a spokesman for Del Sol Medical Center, said the hospital was treating 11 El Paso victims. Nine were in critical but stable condition and two were stable, he said. Patient ages ranged from 35 to 82.

The University Medical Centre of El Paso received 13 patients, according to Ryan Mielke, the hospital's spokesman. 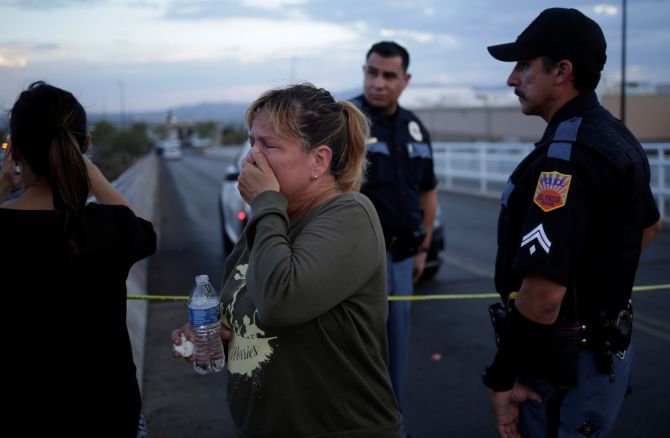 IMAGE: A woman reacts after a mass shooting at a Walmart in El Paso, Texas, on Saturday. Photograph: Jose Luis Gonzalez/Reuters

The authorities identified the El Paso gunman as Patrick Crusius from an affluent Dallas suburb. He was taken into custody after he surrendered to the police outside the Walmart store.

The authorities said they were investigating a manifesto Crusius, who is white, may have posted before the shooting, which described an attack in response to "the Hispanic invasion of Texas."

The manifesto is filled with white nationalist language and racist hatred toward immigrants and Latinos, blaming immigrants and first-generation Americans for taking away jobs.

Citing a source familiar with the investigative process, the CNN said the FBI has opened a domestic terrorism investigation into the shooting to be worked concurrent to the state investigation, with Texas authorities taking the lead.

A Twitter account that appeared to belong to Crusius has been shut down. Tweets on the account had praised Trump and, in particular, his effort to build a wall along the US-Mexico border.

The FBI is asking witnesses who took photos or videos during the shooting to submit their unedited media to them for examination. 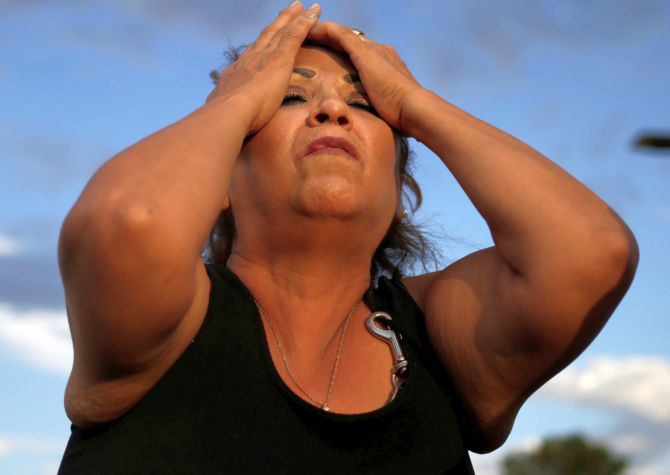 IMAGE: A woman reacts after a mass shooting at a Walmart in El Paso, Texas. Photograph: Jose Luis Gonzalez/Reuters

"I can't believe I'm sending a note like this twice in one week," Walmart CEO Doug McMillon said in a message posted an Instagram. "My heart aches for the community in El Paso, especially for the associates and customers at store 2201 and the families of the victims of today's tragedy."

The massacre at the Ohio and Walmart near the Cielo Vista Mall became the nation's latest mass shooting as defined by the Gun Violence Archive, a not-for-profit organisation that provides online public access to information about gun-related violence. 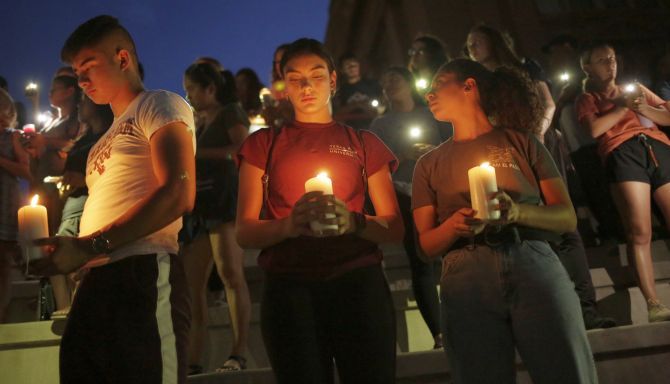 The archive categorises mass shootings as incidents in which four or more people were shot or killed. So far this year, 522 people have died in mass shootings and 2,040 injured, according to the data.

El Paso has long been both a cultural and political symbol of Hispanic Texas. The city has had a binational feel because of its proximity and ties to its sister city in Mexico, Ciudad Juárez, and has been in the national spotlight for months. Thousands of Central American families have flooded the city and surrounding areas seeking asylum.