Three children were among five people killed and 64 injured after a fire broke out in a Durga Puja pandal here due to overheating of a halogen light, officials said on Monday. 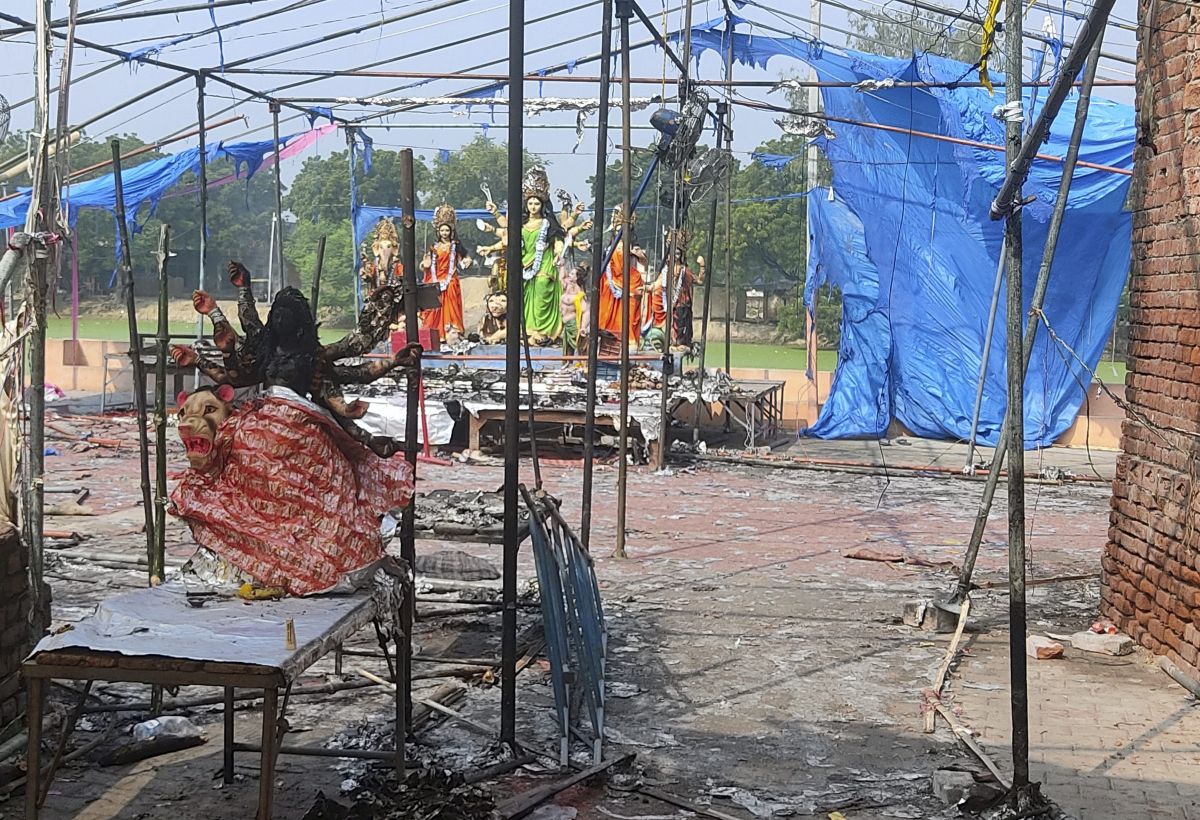 IMAGE: Charred remains of a Durga Puja pandal after a fire broke out during a digital show on Sunday night in UP's Bhadohi. Photograph: PTI Photo

A digital show was going on at the pandal in Nathua village when the fire broke out on Sunday night, reducing the structure to ashes.

More than 300 people were in the pandal when the blaze erupted and a majority of them were women and children.

District Magistrate Gaurang Rathi said the fire broke out around 9.30 pm on Sunday when a halogen light at the pandal overheated, causing an electric wire to catch fire.

Soon the fire engulfed the wooden scaffolding and the tent, he said.

The cause of the fire was ascertained by a special probe team constituted by Additional Director General Ram Kumar, he added.

Superintendent of Police Anil Kumar said an FIR has been lodged at Aurai police station against members of the concerned puja samiti as negligence was found in organising the event.

The FIR has been lodged under sections 304A (causing death by negligence), 337 (whoever causes hurt to any person by doing any act so rashly or negligently as to endanger human life etc) and 326 (voluntarily causing grievous hurt by dangerous weapons or means) of the Indian Penal Code and Section 135 of the Electricity Act (supply and use of energy by non-licensees and others).

Uttar Pradesh Chief Minister Yogi Adityanath condoled the loss of lives in the incident, his office said in a tweet on Sunday.

Adityanath has directed officials to ensure that the injured get proper treatment.

Later, the CM appealed to all the Durga Puja committees organising such events in the state to follow electricity and fire safety norms.

Adityanath, according to a statement issued here, directed district administrations to hold talks with puja committees in their districts and ensure safety norms are being followed.

Taking lessons from the Bhadohi incident, he said, awareness programmes about fire safety norms should be run as the safety of devotees is the priority.