Seven people, including three children, were killed in a blaze that ravaged through the shanties in northeast Delhi in the early hours of Saturday. 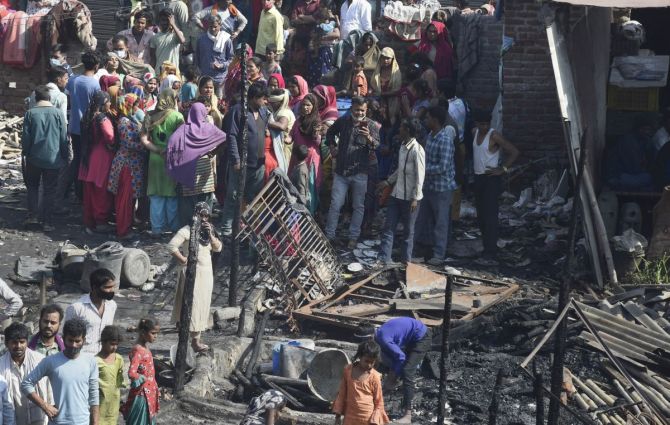 Chief Minister Arvind Kejriwal announced a compensation of Rs 10 lakh for the kin of adult deceased, Rs 5 lakh in case of minor deceased, and Rs 25,000 to those whose shanties were gutted.

Two minors, Roshan (13) and his sister Dipika (9), of same family were killed in the fire.

Five other deceased were from another family.

Santu, the 58-year-old grandfather of Roshan and Dipika, said, "The fire started around 12.30 am when we were sleeping. We have no idea from where and how it started. We have only one room. We came out of shanty when the fire broke out to save our lives."

A senior official of the Delhi Fire Services said information regarding the blaze near pillar number 12 of Gokulpuri village was received at 1.03 am.

Thirteen fire-tenders were rushed to the spot, he said, adding that the fire was finally brought under control around 4 am.

Seven charred bodies were recovered from the site, the official said.

Around 60 shanties were affected and 30 of them were completely gutted in the fire, he added.

Additional Deputy Commissioner of Police (northeast) Devesh Kumar Mahla said the reason behind the fire is yet to be ascertained.

He said teams from the Forensic Science Laboratory (FSL) at Rohini also visited the spot.

A case under sections 285 (Negligent conduct with respect to fire or combustible matter) and 304A (Causing death by negligence) of the IPC has been registered at Gokulpuri Police Station.

Further sections will be added after the reports of fire department and FSL team, a senior police officer said.

Some people received minor injuries in the incident, police said.

Kejriwal visited the site of the incident and took stock of the situation and interacted with affected people.

"When I woke up this morning, I came to know that a fire here killed seven people and many shanties were burnt. I am deeply saddened with this incident. I pray to God that the deceased rest in peace."

He said he had issued orders for a swift release of the compensation amount.

"I will try to release this (compensation) very soon, in one-two days, so that you get the money soon," Kejriwal said.

"This is a very sad and a heartrending incident. I urge the CM to immediately announce a compensation of Rs 1 crore for the families of the deceased and those who have been injured should be given the best treatment," he said.