National Democratic Alliance candidate Jagdeep Dhankhar was elected as the 14th vice president of India on Saturday as he defeated the Opposition's candidate Margaret Alva. 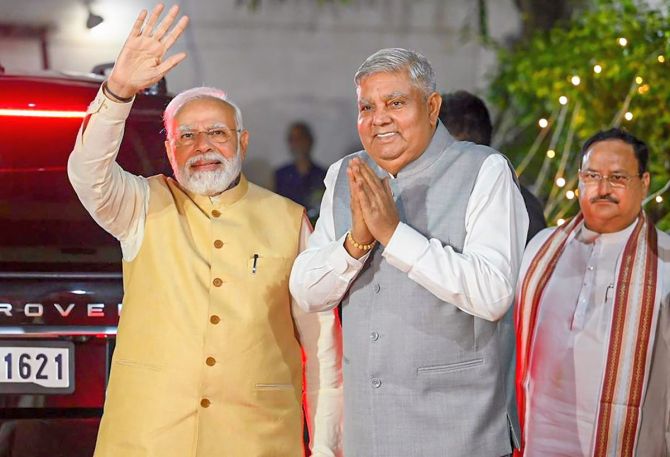 Dhankhar, a former governor of West Bengal, secured 528 votes against Alva's 182. His victory margin was the highest since 1997.

The nation will benefit from Dhankhar's long and rich experience in public life, the president tweeted.

Dhankhar, 71, will take oath as the vice president on August 11, a day after incumbent M Venkaiah Naidu's tenure ends.

He will be the second vice president from Rajasthan after Bhairon Singh Shekhawat who held the office between 2002 and 2007.

With Dhankhar's election, the presiding officers of both Houses of Parliament will be from Rajasthan. The vice president is the chairperson of Rajya Sabha. Currently, Om Birla who was elected to Lok Sabha from Rajasthan's Kota is the Lok Sabha speaker.

The numbers were stacked in favour of Dhankhar as the ruling Bharatiya Janata Party enjoys an absolute majority in Lok Sabha and has 91 members in Rajya Sabha. The BJP heads the National Democratic Alliance.

Even before the results were announced, celebrations had started outside the residence of Parliamentary Affairs Minister Pralhad Joshi where Dhankhar was present.

Soon after the announcement of the result, PM Modi met Dhankhar and congratulated him.

Joyous scenes were also reported from Rajasthan's Jhunjhunu, the hometown of Dhankhar. A candidate required at least 356 votes to win the election.

The voter turnout of 92.94 per cent this time was lower than 98.2 per cent recorded in the 2017 election when Naidu was elected.

Members of Parliament, including nominated ones, are eligible to vote in the vice presidential poll.

The electoral college comprises 788 members, but due to eight vacancies in Rajya Sabha, the actual strength was 780.

The Trinamool Congress had abstained from voting claiming it was not consulted while naming Alva as the opposition pick. However, two of its MPs -- Sisir Kumar Adhikari and Dibyendu Adhikari -- broke ranks and cast their ballots. The party has 36 MPs, including 23 in Lok Sabha.

The polling at the Parliament House began at 10 am and concluded at 5 pm.

Prime Minister Modi and his predecessor Manmohan Singh cast their ballots early in the day, while opposition leaders Sonia Gandhi and Rahul Gandhi voted a little after noon.

Home Minister Amit Shah, Defence Minister Rajnath Singh and BJP President J P Nadda were among the leaders who turned up early at the Parliament House.

"Satisfied that I could perform my duties as a third term parliamentarian in the #VP elections, even if in extraterrestrial attire!" he tweeted. 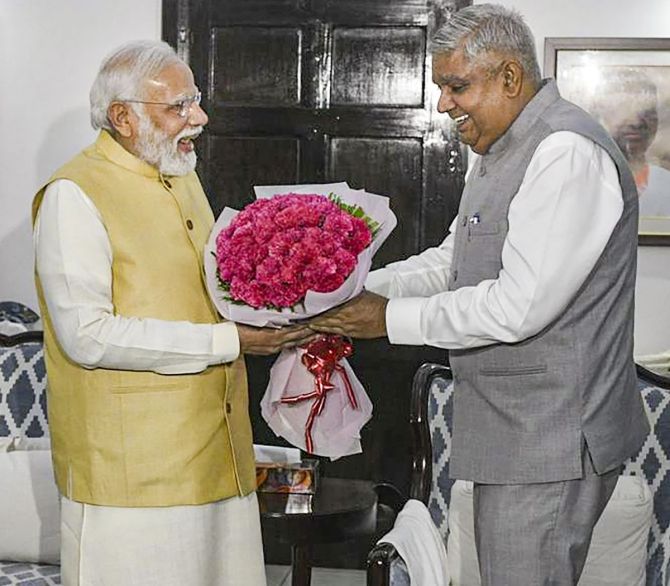 A total of 55 MPs did not turn up to cast their votes, notable among them were BJP MPs Sunny Deol and Sanjay Dhotre, the Samajwadi Party's Mulayam Singh Yadav and Shafiqur Rahman Barq.

The counting of votes began at 6 pm and Dhankhar was declared elected just before 8 pm.

Dhankhar, who had been associated with the Janata Dal and the Congress, joined the BJP only in 2008 after a hiatus of nearly a decade when he concentrated on his legal career.

A man of many interests, Dhankhar's long legal career at the Rajasthan High Court and the Supreme Court and a brief stint as the junior parliamentary affairs minister at the Centre is expected to come in handy as he presides over Rajya Sabha.

He has championed issues related to Other Backward Classes, including the grant of OBC status to the Jat community in Rajasthan.

The BJP described Dhankhar as "kisan putra" while announcing his candidature for the vice presidential election, a move seen in the political circles aimed at reaching out to the politically significant Jat community which had participated in huge numbers in the year-long farmers' protests on the borders of the national capital against agriculture reform measures unveiled in June 2020.

Alva, 80, congratulated Dhankhar on his victory, and said while this election is over, the battle for protecting the Constitution, strengthening democracy and restoring Parliament's dignity will continue.

Union Home Minister Amit Shah congratulated Dhankhar and said he will prove to be an ideal guardian of the Constitution while holding the post besides functioning as chairman of the Rajya Sabha.

Tamil Nadu Chief Minister M K Stalin tweeted, "Congratulations and best wishes to Thiru. @jdhankhar1 on being elected as the Vice President of India. Hope the ideals enshrined in our constitution will be upheld during your tenure besides strengthening the democratic debates in the Upper House."